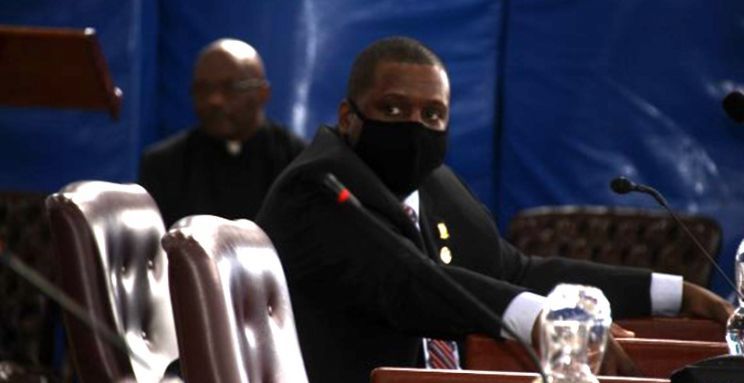 The National Health Insurance (NHI), dubbed your security for a lifetime, is earmarked to be reassessed under the Virgin Islands Party (VIP) administration, which has repeatedly warned about its collapse under the current structure.

Premier and Minister of Finance, Hon. Andrew Fahie has committed at least $1M towards putting a new system in place. The financial difficulties of the NHI programme have been on the forefront for legislators over the years and in discussing the 2021 budgetary allocation it surfaced again.

The Premier and Minister for Finance stated that $1M will be allocated to do a full reassessment of NHI and create a new programme so it would not be a burden on the public’s purse, and to prevent the private practitioners from becoming so far ahead of the public system.

He has told legislators that there must be a balance between the private practitioners and the public system to allow persons to have a genuine choice. Further, the Premier stated that the public system had to be improved not only in terms of expertise, but also in terms of
equipment and whatever was lacking that forced persons to access certain medical procedures privately.

The Premier said it was time to improve the health care to get it up to standards that would enable persons to obtain certain services at a public health institution and have NHI assist. He underscored that NHI was unsustainable in its current form so it had to be fixed sooner rather than later.

The Government had provided NHI with $7.5M as part of a COVID-19 stimulus package. The monies were used to pay healthcare providers.

Set Up To Fail?

The Minister for Health and Social Development, Hon. Carvin Malone indicated that the NHI was founded on the premise that it would have a timeframe before benefits would be paid, and this never happened.

As a result, he stated that the NHI had been running behind. He further stated that when the COVID-19 money came in, it was ensured that the providers would be paid some respectable amounts because a choice had to be made to either let the people go unprovided or bring up those persons who had provided a service under a specific contract and with specific obligations to it.

As such, the money was paid to providers because NHI had been in a quandary due to promises made and unkept.

Hon. Malone is adamant that NHI must be revamped, and $1M has been put forward to do a study so it can be made sustainable and have sustenance. He believes that NHI was creating miracles and it was unhealthy for those individuals that would call on the system.

NHI was set up under the National Democratic Party (NDP) administration and from the onset, it appeared that the system was not properly funded.

Before retiring as Director of the Social Security Board (SSB), Antonette Skelton unraveled the financial situation. She told legislators that there were several recommendations made when it was envisaged, one was to collect contributions for a period of six months and to build up the fund.

When the NHI started in January of 2016, the funds were not there, according to Skelton. She explained that they had to begin paying benefits in that state.

In 2019 the SSB received the first $5M. Skelton explained that the $7.5M that they received was to fund the system with money that they should have received upfront. She stated that there was a point in time where they were up to six months in arrears to the medical providers.

According to NHI officials, the record as of October 2020 was 13,757 claims from that sector with $2.3M spent on the government-funded individuals annually without receipt of any payments, creating a burden on the system.

Not Hard To Fix

Second District Representative, Hon. Melvin Turnbull stated that NHI was not that hard to fix and that Government just needed
to put in the money.

Hon. Turnbull said what we should have been imputed into the system needed to be done over a systematic period of time so that what was paid out. He believes that there was still time to fix it.