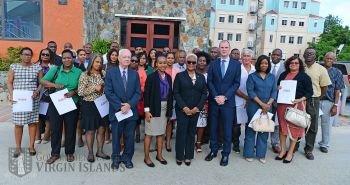 32 individuals are now British citizens after having been previously naturalised as British Overseas Territories Citizens.

The new British Citizens accepted their certificates and recited the Oath of Allegiance to Her Majesty the Queen and the Pledge of Loyalty to the United Kingdom at a ceremony held in the lobby of the Civil Registry and Passport Office on March 12 according to a release from the Government Information Service.

His Excellency the Governor, Mr. Augustus Jaspert congratulated the new citizens on arriving at this point of their journey through the process and demonstrating their allegiance to the United Kingdom as well as the Virgin Islands.

Governor Jaspert said that by reaching and obtaining British Citizenship, they have exercised the right that is enjoyed by British Overseas Territory Citizens under the 2002 legislation. He added, “Though a right, it is nonetheless an important decision you have taken to seek British Citizenship by registration, and it is proper that the fulfilment of that process be marked in a formal way.”

The ceremony was chaired by the Registrar General, Mrs. Stephanie Benn who congratulated the group and said the ceremony confirmed their registration as British Citizens, adding that they will have many rights and privileges to move around the world.

British citizens have the right to live and work in the United Kingdom or any other European Union country. They may also travel to the United States under the visa-waiver programmme for UK citizens.

The eleven persons registered as British citizens on March 12 are: