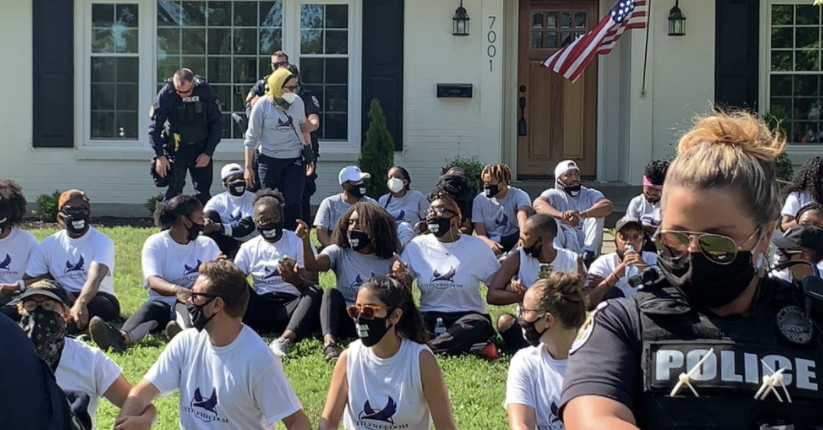 More than 80 people were arrested outside the home of Kentucky's attorney general after they refused to leave while demanding justice for Breonna Taylor, the unarmed Black woman who was shot and killed by police officers in her own home.

Among those arrested were Houston Texans wide receiver Kenny Stills and Real Housewives of Atlanta star Porsha Williams, who was seen being handcuffed and led away by police.

In all, Louisville police said, 87 people were arrested Tuesday after they refused to leave the property of Kentucky Attorney General Daniel Cameron.

90 folks were arrested & are currently sitting in a jail but NOT 1 COP who murdered #Breonna has been arrested? #Justice4Breonna pic.twitter.com/1Mop6zU0Vy

Taylor, 26, was killed in March when Louisville police officers served a search warrant at her home. Taylor and her boyfriend were both asleep in bed when police forced their way in with a no-knock warrant.

Taylor, who was unarmed, was shot eight times. Her boyfriend was also shot in the leg.

Brett Hankison, one of the three officers involved, was fired for misconduct, while two other officers, Sgt. Jon Mattingly and Myles Cosgrove, have reportedly been placed on administrative reassignment.

The police killings of Black Americans, including Taylor and George Floyd in Minneapolis, have sparked protests across the US, with people demanding the officers involved face criminal charges and that police departments institute reforms.

In a statement, Louisville police said that at Cameron's request, protesters who were trespassing were all given the opportunity to leave before being arrested. Each person was charged with disorderly conduct, criminal trespass, and intimidating a participant in a legal process - a felony, police added.

In a tweet, Stills posted a picture of his mugshot and called it "'Good trouble' with my brothers and sisters."

“Good trouble” with my brothers and sisters- organized by @untilfreedom.

Meanwhile, a video of Washington being handcuffed was retweeted by the reality TV star.

Porsha Williams was arrested during a peaceful Breonna Taylor protest in Atlanta. These cops really have nothing better to do.

Porsha really been showing out for us ❤️ pic.twitter.com/jMRXcKLRtK

In a statement obtained by BuzzFeed News, Cameron's office said it would continue to investigate Taylor's death but called the protests at his home an attempt to "escalate."

"We continue with a thorough and fair investigation, and today's events will not alter our pursuit of the truth," his office said in the statement. "The stated goal of today's protest at my home was to 'escalate.' That is not acceptable and only serves to further division and tension within our community. Justice is not achieved by trespassing on private property, and it's not achieved through escalation."