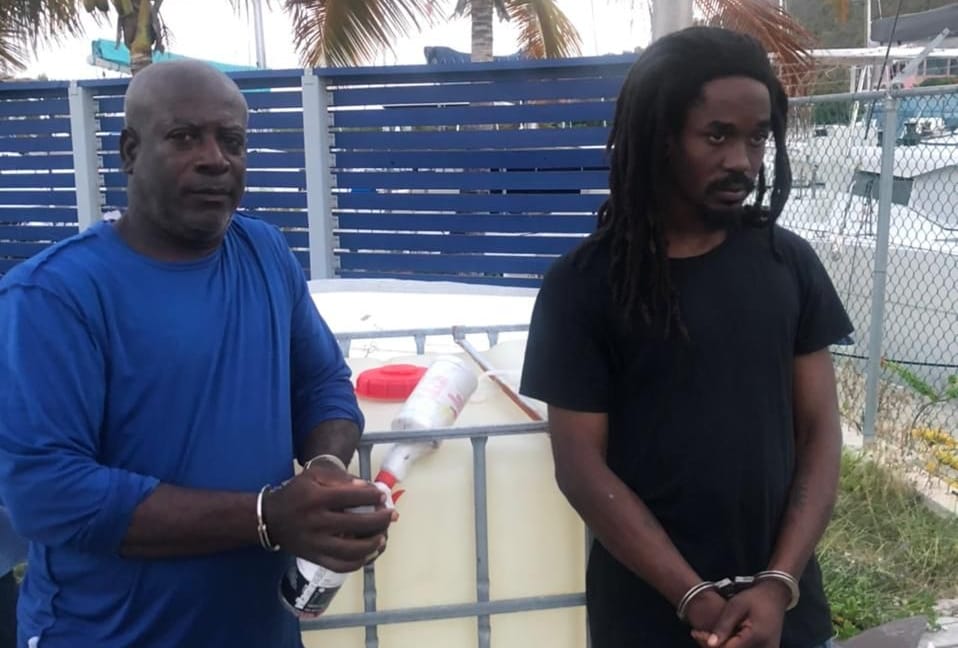 The two men accused of illegal possession with intent to supply more than 400 kilograms of cocaine were denied bail when they appeared before the Magistrate’s Court earlier today.

Alphonso — the alleged boat captain — was also charged with failure to comply with orders given by the police.

In consideration of the bail application made by both attorneys representing the accused, Magistrate Christilyn Benjamin said she had to consider all variables in the matter. She noted that while both men were Virgin Islanders and had their roots in the territory, the severity of the offence and the likelihood of conviction with the accompanying sentence could result in the men absconding if granted bail.

“To give a bail offer and to make the consideration so strenuous that a defendant cannot make a bail offer is just as good as making no bail offer at all. So, taking all of my options into consideration. When I consider this particular case that has been presented before the court, I am of the opinion that there are no conditions that this court can put in place to amount to a reasonable bail offer for these defendants,” Benjamin said.

“Because, to my mind, the circumstances and allegations resented to the court are very compelling and I am of the view that there is a real risk that these defendants will abscond and the issue with absconding is that we never know when someone will abscond until they actual do. And as such, in my opinion, it is too late… Coupled with the concern for community protection, I cannot find any conditions to satisfy these concerns. So, it is on these circumstances bail is denied,” the Magistrate added.

Benjamin advised both Samuel Sr and Alphonso that they can take their bail application to the High Court if they so desire. Both defendants are jointly represented by Nelson Samuel and Stephen Daniels.

The prosecution alleged that on August 13, 2022, both Samuel Sr and Alphonso were intercepted in the vicinity of Cooper Island and a subsequent search of their vessel resulted in the seizure of 419.46 kilos of brick-like substance suspected to be cocaine. The estimated street value is $41,946,000.

The court was informed that the Marine Unit of the Royal Virgin Islands Police Force (RVIPF) was on sea patrol on the southern side of Virgin Gorda when officers noticed a vessel travelling quickly in a westerly direction. The prosecution claimed the officers followed the vessel through the Ginger Island and Cooper Island channel where the vessel was observed to be a white speedboat and had two occupants.

The court was further informed that the officers gave chase. And when in close proximity to the vessel in question, the law enforcers illuminated their emergency light and gave an order for the vessel’s operators to stop. However, the court heard that Alphonso – who was reportedly observed to be the boat captain – and Samuel Sr, the first mate, tried to outrun the police. The chase continued until the vessel was intercepted.

The prosecution alleged that the two accused told officers they had just returned from fishing, and they had nothing illegal in the boat. The police indicated they would conduct a search and 14 canvas bags containing brick-like substances suspected to be cocaine were allegedly found at the bow of the vessel. A further search of the stern reportedly revealed another package of the same substance. Both defendants were cautioned and arrested.

According to the prosecution, the offences for which they are charged carry maximum financial penalty of $100,000 or three times the amount of the street value of the drugs – whichever is greater. Additionally, the men may face a prison sentence of no more than 10 years but no less than three years. In some instances, the law allows for both a fine and a prison sentence.

The prosecution also indicated that while Samuel Sr has no prior run-ins with the law, Alphonso was charged with illegal possession of a controlled substance in 2019 to which he pleaded guilty. He was fined $4,500.

Both defendants will return to court on October 12.