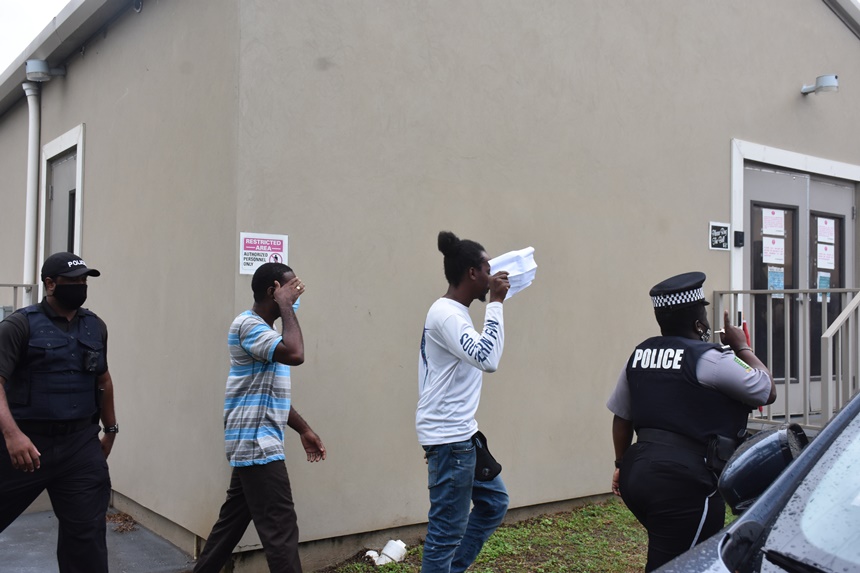 Accused policeman may not be safe in prison if denied bail, court hears

Placing local policeman Darren Davis on remand at Her Majesty’s Prison presents a risk to his safety since he will be surrounded by inmates — some of whom he may have arrested in the past.

That was Davis’ argument through his attorney, Reynela Rawlins, when applying for bail at the Magistrate’s Court on Tuesday.

The 41-year-old and his brother Liston Davis are accused of being involved in the territory’s largest-ever cocaine haul in the history of the BVI and any other British Overseas Territory.

The Davis brothers are charged with keeping a firearm without a license, possession of a prohibited firearm, and three counts of possession of cocaine with intent to supply.

The prohibited firearm was listed as a FAB MWG rifle with one magazine, while the second firearm was a Glock 40 Taurus handgun.

As for the drugs, 23.70 kilos of cocaine was allegedly found in a red Ford Explorer truck, another 159.04 kilos was found in a white truck and 2,170.84 kilos was packaged into 60 bales in a shipping container.

According to the allegations laid before the court by the Director of Public Prosecutions, Tiffany Scatliffe-Esprit, the Royal Virgin Islands Police Force (RVIPF) was conducting an extensive investigation on a suspected drug smuggling operation.

She alleged that on Friday, November 6, the RVIPF’s Special Investigations Unit conducted a surveillance operation at Balsam Ghut for several hours.

During the surveillance, the police allegedly observed Darren around 6 pm in a vehicle heading towards the East End area then returning to Balsam Ghut towards the property where the container was located.

He allegedly met an unknown person who accompanied him to the container before both persons proceeded to the property.

Liston was observed in a pick-up truck around 5:45 pm heading towards Balsam Ghut while being followed by a rental jeep. They stopped and parked in the driveway of the property, the court heard.

Around 6:30 pm, police reportedly executed a search warrant at the Balsam Ghut location. They approached the parked rental vehicle where two unidentified persons exited and fled the scene.

Pursuits by the police were unsuccessful, but they later returned to the property and observed three bales suspected to be cocaine in the aforesaid white truck.

As for the red Ford Explorer belonging to the accused men’s mother, two boxes containing 10-kilogram blocks were found.

The container was found to not only have the 60 bales of cocaine but also a garbage bag with two loaded guns.

Police conducted investigations into the driver of the rental vehicle. That motorist was identified by the rental company and this led to the police going to the house of the individual. Nobody was home but a set of keys retrieved during the operation at Balsam Ghut successfully opened the door of the unidentified person’s home.

On November 8 at Pockwood Pond, police apprehended Liston at his home and arrested him. Darren was later arrested on November 9 at his residence in Cane Garden Bay.

In objecting to bail, the DPP argued that the nature of the charges coupled with the fact that persons of interest are still at large presented too much of a risk that could affect investigations.

She further said if bail is to be considered, she believes the amount should be 10 percent of the total sum of the seizure.

And as Rawlins used her client’s law enforcement profession as an argument for him not to be remanded, Creque’s said in Liston’s bail application that he is a father of three who should be allowed to continue to execute his duty as boat captain to continue to provide for his family.

Safety risk for police in prison

She said she felt the magnitude of the charges did not warrant bail as too many risks existed. She also said she felt that proper infrastructure exists at Her Majesty’s Prison to safely facilitate the accused police officer.

The Davis brothers are scheduled to return to court on January 27, 2021.