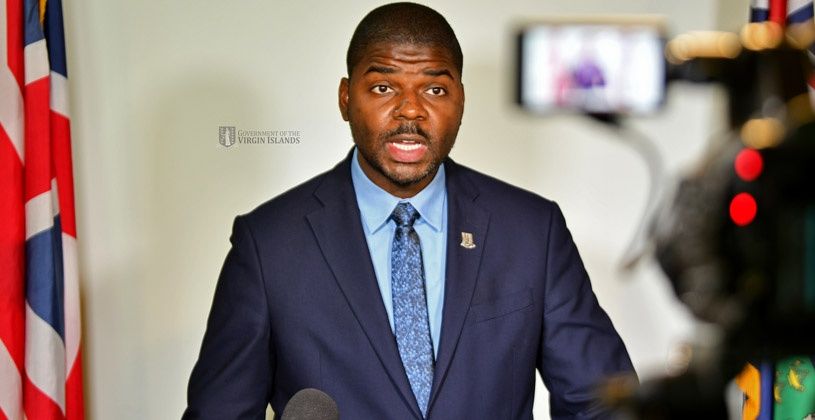 Acting Premier Pushes Back! Calls For Enhanced Cooperation With UK, Not Direct Rule

In response to the public release of the Commission of Inquiry (CoI) report, Acting Premier of the Virgin Islands, Dr. Natalio Wheatley has appealed for the United Kingdom (UK) to hold off implementing any plans for the suspension of the BVI constitution and direct rule.

The CoI Report calls for the partial suspension of the constitution and direct rule by the UK for at least two years.

“I know that this will be of great concern to many persons, and I too am very concerned about the recommendation,” Dr. Wheatley shared in a statement to the Territory on Friday, April 29.

He acknowledged that the report makes a number of recommendations aimed at reforming and strengthening the systems of Government in the Virgin Islands, but he expressed the view that these can be achieved without returning to direct rule.

“In my view, these can be achieved without the partial or full suspension of the Constitution in which direct rule would apply. The report’s recommended reforms, and also actions for the Governor to take up, are not mutually exclusive or contradictory to maintaining democratic governance in the Territory. Constitutional powers already exist under the constitution that can be exercised if necessary,” Dr. Wheatley stated.

He explained that UK’s direct rule would mean in real terms that there would be no more elected representatives who represent the people of the districts and the territory in the House of Assembly where laws are made for ‘our society’.

“There also would be no Government Ministers to advance the public’s priorities or a Cabinet to approve policy. All of this authority would be vested in the Governor. The benefit of representative democracy to the public is the understanding and responsiveness of their elected Representatives to their challenges, who also serve as conduits of their views, especially on reforms,” Dr. Wheatley stated.

He stated that he has written to Governor John Rankin, and also shared with UK Minister for the Overseas Territories, his initial thoughts on the recommendations as a whole from the standpoint of good governance and democracy.

Dr. Wheatly expressed the belief that in the best interest of the people of the Virgin Islands, enhanced cooperation mechanism or framework between the Governor and the Government to swiftly implement recommendations under a very tight timetable, without resorting to direct rule.

“These arrangements can be extended every 12 months until satisfactory progress is made. We already have some very good examples of good cooperation of this kind, including the Recovery to Development Agency and the Protocols for Effective Financial Management,” Dr. Wheately stated.

He added, “My political colleagues and I still fully support the proposal for UK-BVI talks on the findings and recommendations of the report which the Governor previously announced, including the participation of the political parties represented in the House of Assembly, UK Ministers and the Governor himself.”

The Acting Premier noted that this format ensures the democratic representation of the people of the Virgin Islands in the dialogue on the UK-BVI response to the CoI report.