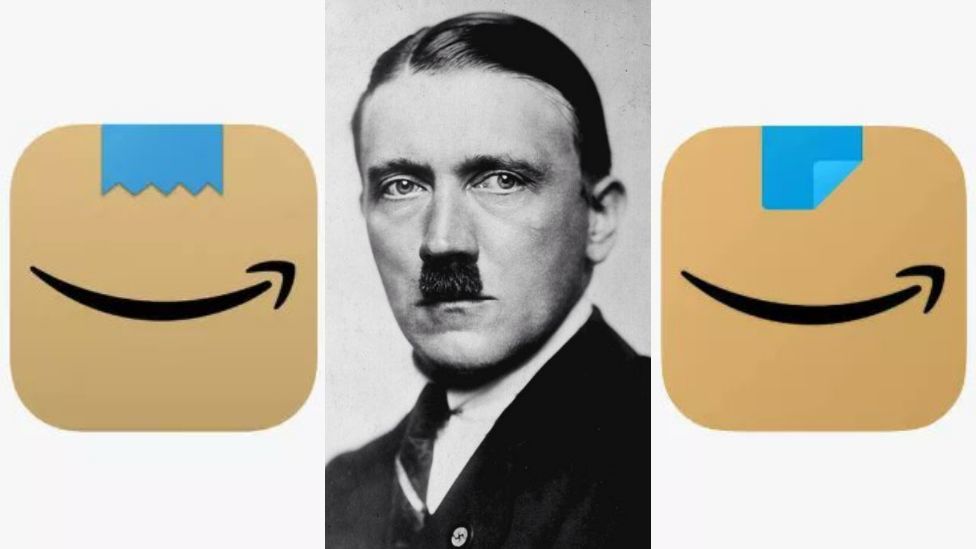 Amazon has quickly changed its main shopping-app logo, after commentators said the recent redesign made it look like Adolf Hitler.

Launched in January, the icon depicts a strip of blue tape over an Amazon "smile" logo.

But some observers said it resembled a toothbrush moustache, associated with the Nazi dictator.

The technology giant has now changed the design to a folded blue tape, following customer feedback.

Amazon told BBC News the first icon had been trialled in a few countries before the change had been made.

Branding agency Coley Porter Bell chief executive Vicky Bullen said: “Unfortunately for Amazon, the visualisation of their parcel tape on the original logo will immediately be associated as a Hitleresque moustache, as that shape is forever embedded in our [subconscious] brains as such - not the best association for a brand that wants to create delight on the doorstep.”

The app logo - which appears on smartphones and tablets - previously showed a graphic of a shopping trolley.

The new design appears to be based on a brown Amazon parcel, with the company's signature smile and blue tape.

Amazon said: “We designed the new icon to spark anticipation, excitement, and joy when customers start their shopping journey on their phone, just as they do when they see our boxes on their doorstep.”

One customer had tweeted: “My parents use Amazon nearly every day.

"They’re going to be lost for the next few days.

"When they ask where Amazon’s gone, I’ll tell them to look for the cardboard Hitler."

"It reflects well on Amazon that they listened to their customers.

"It's clear they care about what their customers say and put the customer at the heart of what they do.

"That can only be a good thing."

Hitler's face is so recognisable many people claim to "see" it in inanimate objects.

In 2011, an image of a Swansea house that resembled the dictator went viral.

A few years later, a man was "completely horrified" to find his new passport photo made him look like Hitler.

And brand errors related to the Nazis are also not unheard of.

In 2002, sports brand Umbro was criticised after one of its trainers was found to have the same name as the toxic gas the Nazis used to murder millions of people across Europe.

Oh ya 150 days ago
Bozo must hate it when you peons noticed this. Try shopping from others than Amazon before they all go out of business and you have to buy from Amazon at the price they choose because there will be no competition
View all comments (1)Add comment