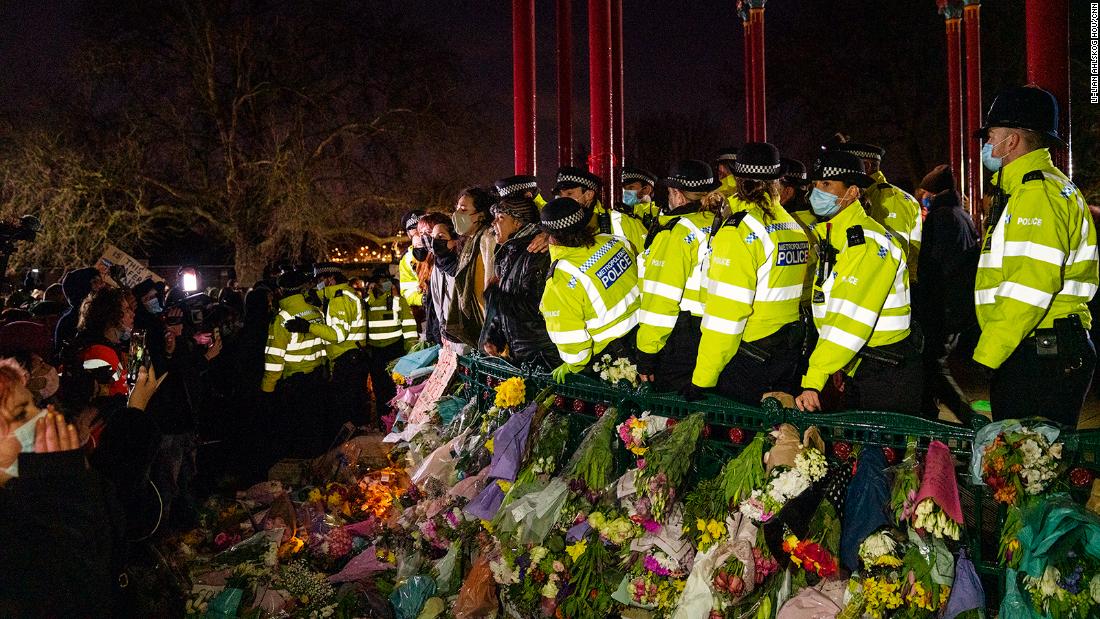 Analysis: Boris Johnson's boast of a 'Global Britain' is taking a pounding amid series of crises

Britain's overseas reputation has been tarnished lately, and some of it is entirely self-inflicted.

From images of burly police officers wrestling women to the ground to claims of racism in the royal family, accusations of Brexit rule-breaking and even a coronavirus variant first detected in England and now spreading across the globe, the United Kingdom is coming up tainted in the court of international opinion.

The latest crisis came this weekend, when images of a crackdown on a peaceful London vigil for a murdered woman were beamed around the world.

Patsy Stevenson was photographed pinned down by two London Metropolitan Police officers while attending a vigil for Sarah Everard, who was killed earlier this month. The man accused of murdering Everard is a constable in the same police force.

Stevenson says she is still grappling with what happened to her. "I'm quite small, and it was two very large male officers who sort of pulled me back very quickly, and I hit the ground," she told ITV's "Good Morning Britain" on Monday.

A viral photo of woman prostrate on the ground, police officers astride her back, is never a good look for any democracy, but this latest shocker is just one in an increasing accumulation of PR own goals the UK is belting into its own net, just as the country chases global partners for post-Brexit trade.

Harry and Meghan's recent bombshell allegations of racism in the royal family have also shown how easily reputations, even those of a nation, can become tarnished.

America's much lauded young poet Amanda Gorman, whose eloquent prose was picked by President Joe Biden to help usher him into power at his inauguration, saw what some Brits did not.

"Meghan was the Crown's greatest opportunity for change, regeneration, and reconciliation in a new era," Gorman tweeted. "They didn't just maltreat her light -- they missed out on it."

News of the royal rumble even reached Biden's office, where press secretary Jen Psaki praised the "courage" of Harry and Meghan for speaking out about their struggles with mental health.

The Queen attempted to remedy tensions through a Buckingham Palace statement promising a private family examination of the "concerning" racist claims, it has raised awkward questions in the nation's extended family, the Commonwealth of Nations.

This group of 54 nations of mostly former British territories -- many of which are in Africa and the Caribbean -- contains around 2.4 billion inhabitants, from a wide range of racial backgrounds. The royal family has long relied on the Commonwealth for international support and prestige.

To paraphrase the Queen, looking back on the 1992 when Windsor Castle caught fire and Princess Diana separated from Prince Charles, the UK is having an "annus horribilis."

The past year of Covid-19 pandemic reveals a country struggling to reconcile the image of vigor that Prime Minister Boris Johnson cherishes for the nation.

The brutal reality is that due to a multitude of government failings, the UK has among the highest fatality rates per capita globally and a higher death toll than any other European nation.

Johnson finally scored plaudits in the UK for the fastest European rollout of vaccines -- more than 35% of the nation has been given a first shot compared to the EU average of 9%.

But over the past few months, the more infectious B.1.17 strain of the coronavirus, first discovered in England, has steadily driven many European nations' infection rates to lockdown-inducing levels. On Monday, the head of the CDC warned that B.1.17 would become the dominant strain in the US within weeks.

Closer to home, Johnson's government has again been accused of breaking the rules of his Brexit deal with Brussels. On Monday, the EU launched legal action against the UK after Johnson's unilateral attempt to extend a grace period on food imports to Northern Ireland. A previous UK plan to violate international law over Brexit was met with a swift rebuke from Biden.

For a nation that revels in reminiscing of bygone better days, the words of one such anthem, "Rule Britannia! Britannia, rule the waves," resonates less these days of riding a mighty swell and more of being lashed by misfortune and misjudgement.

Not so many governments ago, under Labour's charismatic leader Tony Blair, the UK wore the moniker "Cool Britannia" with a confident swagger, seemingly enjoying the tide of global goodwill just as it did in the 1960s when the Beatles took the world by storm.

Quite when the UK's gloss began losing its sheen is hard to say. Blair courted catastrophe when he backed the United States in the unpopular 2003 invasion of Iraq, but he held on to power until 2007, and kept the illusion of popularity for a few years longer. But Blair never fully recovered his much-valued international stature.

The UK's current trajectory to today's trough of low international opinion perhaps has its roots in Brexit, which made little sense to many Europeans (and 48% of Britons). Perhaps now there's also the unfortunate alignment of political incompetence during the pandemic. It's also possible the roots of reputational decline are a whole lot deeper, and more typical of faded empires.

Of course, none of this accounts for large men in uniform kneeling across women protesting violence against other women. The UK now has a wide variety of perception woes that it must own and resolve for itself.