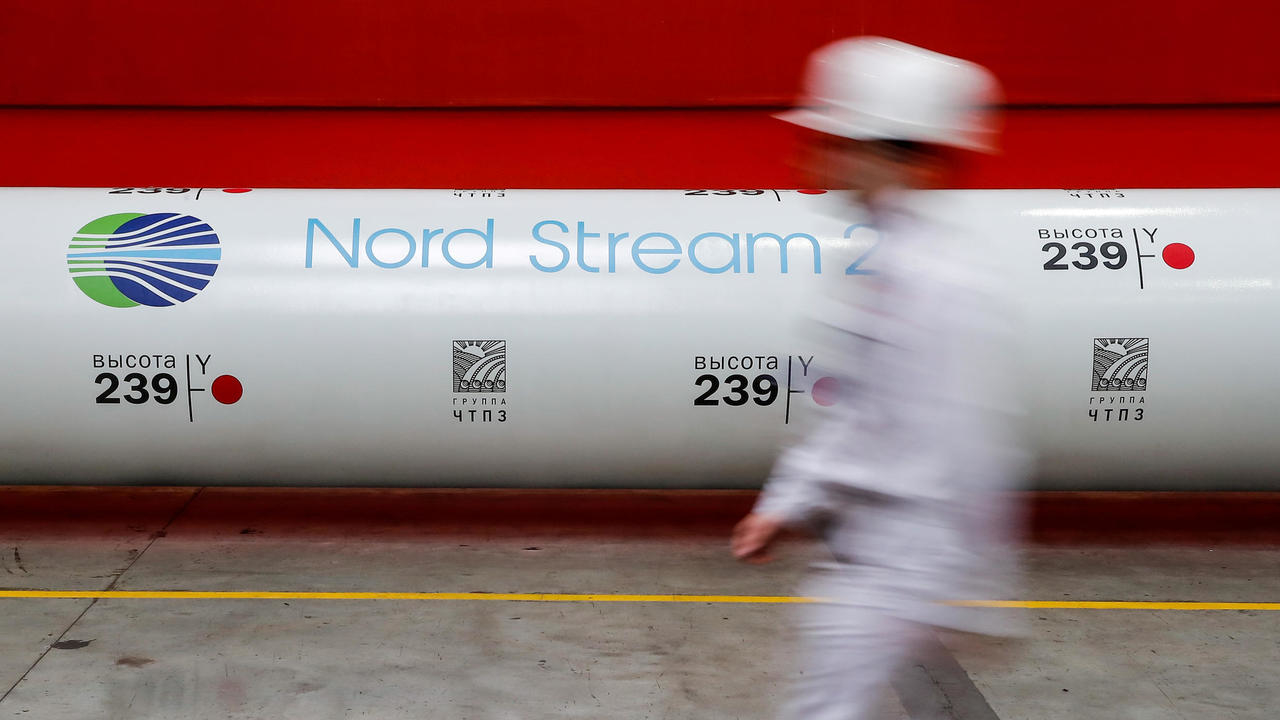 This week, Estonia hosted the Three Seas Summit. On paper, the initiative is aimed at improving infrastructure in 12 former Warsaw Pact states and Austria, countries that lie between the Baltic, the Black Sea and the Adriatic. But since its creation, the Three Seas Initiative has become the focus of increasing international tension.

The outcome of this year’s Three Seas Summit (TSI) in Estonia: a billion-dollar pledge of loans from Washington, a 200-million dollar investment by technology giant Google, and promises by Estonia (also home to the Nato cyber warfare center) to create the cyber-backbone of the Three Seas Initiative.

But the TSI is not just another forum where national leaders can rub shoulders.

The TSI was initiated by Poland and Croatia in 2015, and is a brainchild of US think tanks like the Atlantic Council. On the surface, it focuses on promoting investment in north-south connectivity (transport infrastructure, transport, energy supply) to counter the post cold war pattern which is east-west oriented, think of gas pipelines running from Russia to EU core countries through Germany.

The IMF has released a report showing that states in Central, Eastern and South-Eastern Europe have EUR 1.15 trillion gap in infrastructure investments compared to Western Europe. The Three Seas Initiative Investment Fund will be a part of the solution to the problem pic.twitter.com/FztPstFVvp

It found a ready partner in the US.

“It is a geopolitical project that aims at maintaining central and eastern Europe in the Euro-Atlantic space and cut the link with Russia,” said Pierre-Emmanuel Thomann, president of the geopolitical think tank Eurocontinent and a lecturer at the University of Lyon.

Last but not least: the TSI would create a market for US shale gas, a direct competitor for the Russian-German Nord Stream gas pipeline project, which pumps gas provided by Russian energy giant Gazprom via the Baltic States into the EU’s main territory. 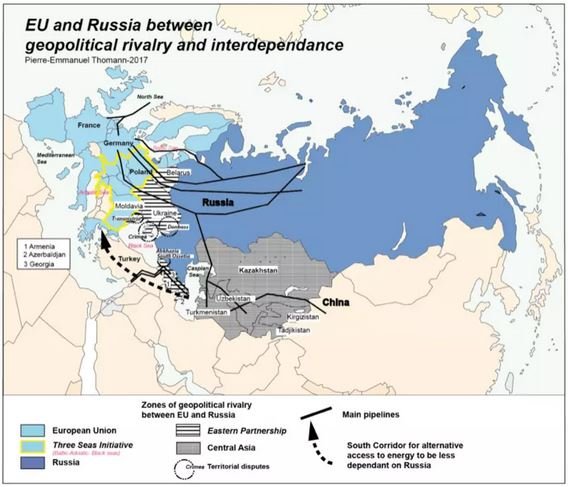 The Three Seas Initiative countries are lines with yellow. The map shows the position of the 12 TSI member states between Russia and the EU.

The importance Washington attributes to the project was underlined by US President Donald Trump, who attended the 2017 TSI Warsaw Summit.

That triggered the attention of the EU – never too happy with the project - and then European Council member Jean-Claude Juncker attended the 2018 TSI Bucharest meeting, while the EU Regional Development Fund was earmarked to supply 155 billion euros.

A start, “but not enough,” estimates Thomann who says that bringing the infrastructure of the 12 TSI states up to western European levels would require between 500 and 600 billion dollars.

But the Covid-19 pandemic has stopped the project in its tracks. The whole summit was done by online tele-conferencing, while the upcoming US elections prevent other countries from making “bold decisions,” says Thomann, who also noted the presence of German and EU observers who “did not make commitments” in terms of money supply to the project – no more mention was made of the 155 billion euros due to come from the Regional Development Fund.

“The Covid-19 recovery fund is also linked to the EU budget,” according to Thomann. “Because of the Covid crisis there will be a lot of competition (between EU member states when it comes to access to EU money. Priorities have changed.”

He also noted a change of attitudes towards the project, notably by Germany.

“Germany was suspicious of the project, because it was initiated by the US, and it would create a new bloc that would divide Europe.”

Germany is against that because “it is the central power which tries to maintain all the countries around - with Germany as the center.”

So Germany joined TSI “to neutralise” attempts by the project that could harm German interests. This triggered the EU commitment, so the project “wouldn’t go against EU objectives”.

The problem is that if the estimated number of 500-600 billion dollarsis not reached, the individual TSI countries won’t have enough money to upgrade their infrastructure.

And that’s where China sees a chance.

Initiated by Beijing in 2012, the Cooperation between China and Central and Eastern European Countries (CCCEEC,) today dubbed the “17 + 1” project, brings together a group of European and Asian nations under China’s management as part of its Belt and Road Inititative (BRI,) the trillion dollar infrastructural project that spans the Eurasian continent.

And thus, the countries in central and Eastern Europe have become a frontline in the geo-strategic battle between the US and China as some of the CCCEEC countries, notably Poland and Hungary, are also part of the Three Seas Initiative.

"The countries participating in the ‘17+1’ initiative share the opinion that their interests and geopolitical priorities and their concept of European purposes are insufciently taken into account," says Thomann in his article "The Three Seas Initiative, a New Project at the Heart of European and Global Geopolitical Rivalries," published by the Institute of East-Central Europe.

"The idea of an alliance to better defend their position is also a sign of mistrust vis-à-vis the domination of the EU by Germany, but also the Franco-German tandem," he says. 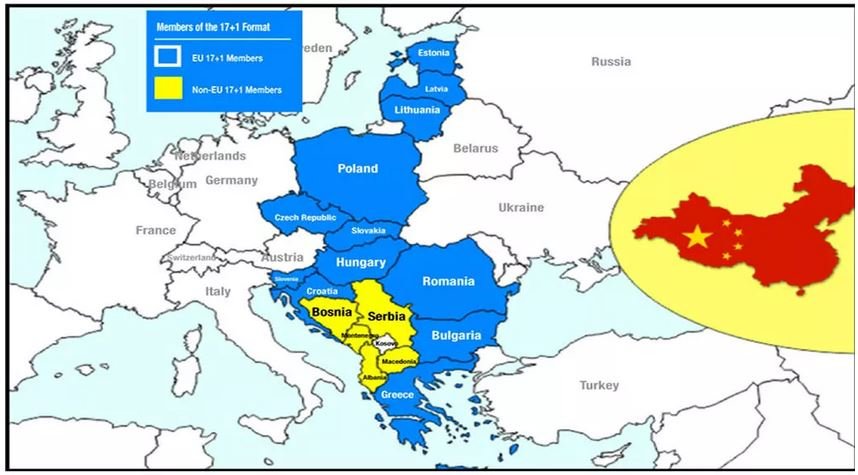 Countries taking part in China's "17+1" project are indicated in blue for EU members and yellow for non-EU members. 11 of the 17 also take part in the Three Seas Initiative.

But the EU has become increasingly suspicious of China’s moves into Europe. The “17+1” cooperation signed BRI-related preliminary agreements with Beijing, without first consulting Brussels. Beijing's other investments and acquisitions have seen some European politicians accuse the Chinese of “buying up Europe”.

In the 2019 EU-China Strategic Outlook, Brussels calls China a “systemic rival.” Most recently, French president Emmanuel Macron said that the EU needs a unified strategy instead of individual national policies.

“I agree, that we, democracies on the European continent should stick together and guard our values and not allow non-democracies to expand their imperial schemes,” Veiko Spolitis, a former Lithuanian member of parliament who now works as a fellow for the Latvia Institute of International Relations in Riga told RFI.

But Brussels first talked austerity, not soft loans for development projects. Now it is more concerned with finding out how to pay for the massive debts generated by the Covid-19 crisis.

“If we don’t want to let China in, then Paris, Berlin, London, however Brexit turns out, have to get together and really strategically think about the further integration of the EU,” said Spolitis.

“It’s a contradiction,” Thomann concurred. The TSI and the Chinese '17+1' are “competing geopolitical projects. Eastern European countries try to get the best of all different contradictory geopolitical objectives.” In the end, he expects that no matter who wins the US elections, a great deal of pressure will be exerted on the TSI member states to not align with China’s infrastructural plans.

In the end, Thomann estimates the Chinese may back off. “It will be easier for them to reach Central Asia and cooperate with Pakistan,” as a result of mounting pressure on Europe not to cooperate with China, and increasing skepticism in Europe regarding China as well.

Oh ya 128 days ago
The USA wants to stop the pipeline from Russia so they can get Europe to buy more expensive gas from them. The USA says its the greatest nation in the world yet they are now needing to borrow money from poorer nations in the form of bonds to keep themselves going. Great nations don't borrow money from poor nations. And also if BIDEN gets elected he said he is shutting down the oil industry anyway and then the world will be able to watch the USA crash in real time to a 3rd or 4th world nation
View all comments (1)Add comment