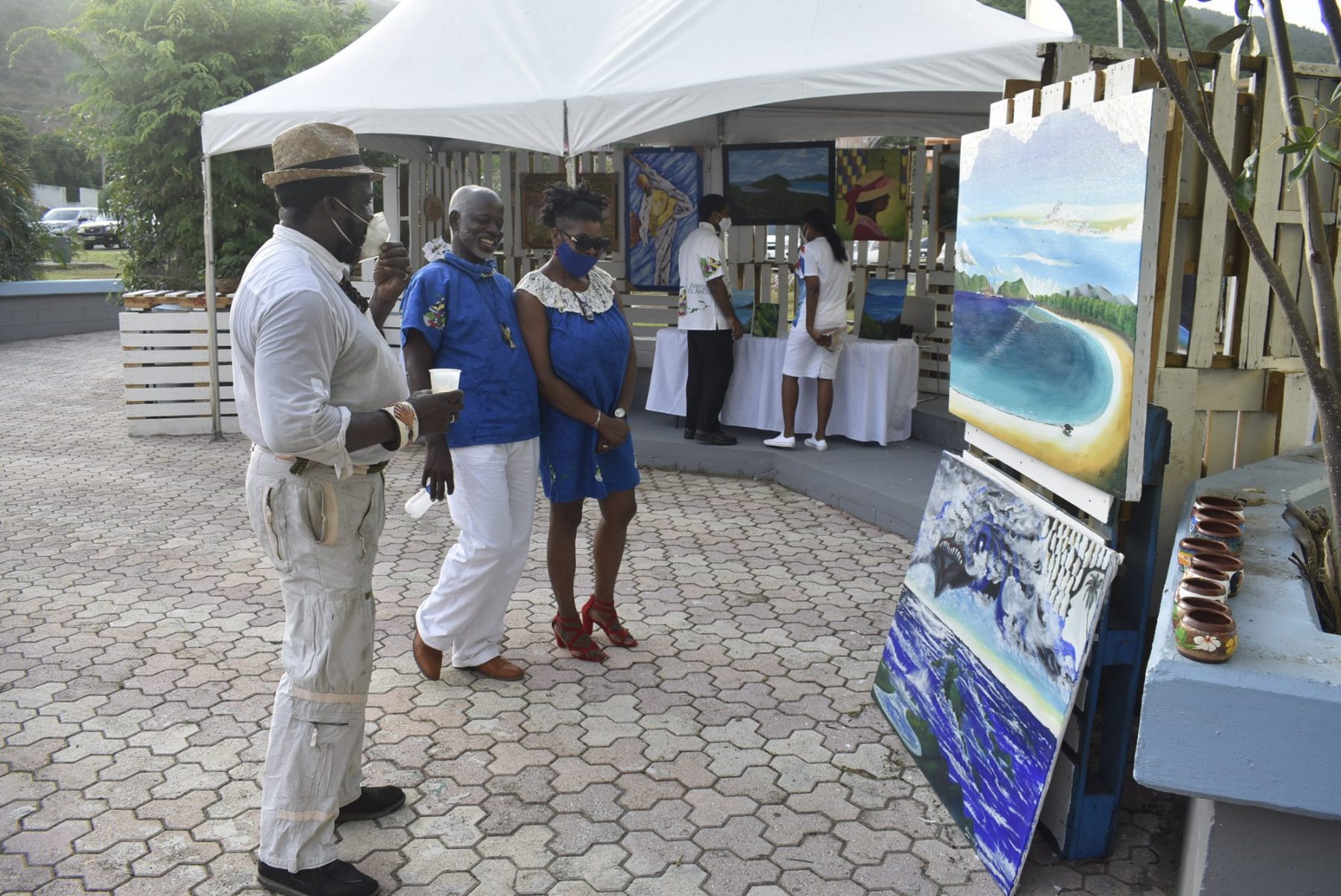 When Karl Burnett tried making pottery for the first time as a student at BVI High School, he was instantly hooked.

He soon began selling his wares out of the bed of his truck, eventually saving up enough to launch his own studio, the Pottery Garden in Josiahs Bay.

“It’s a versatile material that can do almost anything you ask it to do, and I just realised that … I had some talent within me, and I guess I liked that fact and I just pursued it and I developed a skill,” Mr. Burnett said.

He was one of 20 participants who set up shop in front of the Elmore Stoutt High School on Sunday afternoon as part of an art expo hosted by the Virgin Islands Communal Association. Drawing in a steady crowd of people over the course of several hours, the exhibition displayed works from artists of all stripes, from bakers to painters to photographers, who mingled next to their pieces, cracking jokes and chatting with attendees.

As the kick-off to Culture and Tourism Month, which is being headed by the Department of Culture in collaboration with the BVI Tourist Board and Film Commission, the art show was followed by an opening ceremony.

To close out the opening ceremony, Jehiah Maduro, a graphic artist in the Department of Information and Public Relations, unveiled a set of brightly coloured aluminum sculptures that he then handed over to the government.

Mr. Maduro was commissioned for the project in early October, and soon after realising the task ahead was more daunting than he had thought, he called in some friends to help him finish the work by Sunday afternoon, he said.

As inspiration for the new pieces — each of which show a self-contained scene of traditional life in the VI, such as a man tying cattle to a post or a woman baking cassava bread — Mr. Maduro thought back to a trip to North Carolina during a festival where artists would line the streets with their own interpretation of the area’s agricultural history.

“I thought, ‘Well, look at that: They’re celebrating the agriculture,’” Mr. Maduro said.

“I thought that was really cool. Then I realised that over here there is nothing really to celebrate our culture in the same way.”

Similar events spotlighting VI culture will be held throughout the month, with a food fair and schools arts fest coming up tomorrow, and a bonfire, storytelling and sankey singout night Saturday at the Festival Village Grounds, which will also be hosted by the VICA.

Ulric Scatliffe, who had two younger family members showing work at the exposition, said VI culture has suffered in recent years as the older generations have failed to pass on their traditions. For this reason, he explained, events like the art exposition are needed.

“It is a beginning,” Mr. Scatliffe said, adding, “We don’t really support our own when it comes to doing this type of stuff.”

“I go to places all over the world to appreciate their culture, but when it comes to the BVI I can’t get the grasp of the appreciation of the culture, because it is so lost,” Ms. Potter said, adding, “This is why we are trying to restore, to bring to the forefront for … us who are here to understand, but for those who come as visitors as well.”

Though Ms. Potter said she was too busy overseeing the art show to fully enjoy it, she was happy to see a strong contingent of schoolchildren decked out in territorial dress, and thankful for volunteers who made the event run smoothly and safely.

For future showings, she hopes to include artists from a greater variety of mediums and attract a bigger crowd, she said.

Like many of the artists displaying their work on Sunday, Bing Malone draws much of his inspiration from the VI.

Many of the pieces he displayed on Sunday were vivid paintings of landscapes emblematic of the territory: a sunset above a bay, for instance, or sailboats making their way through a calm ocean. “I like colours and motivation,” he said, adding, “People can get a joke, get a laugh about it, and it’s motivating.”

As for Mr. Burnett, he most likes working on pieces that serve a utilitarian purpose, he said.

“I like making functional stuff, that if someone gets it, they wouldn’t just put it down on a shelf somewhere,” he said