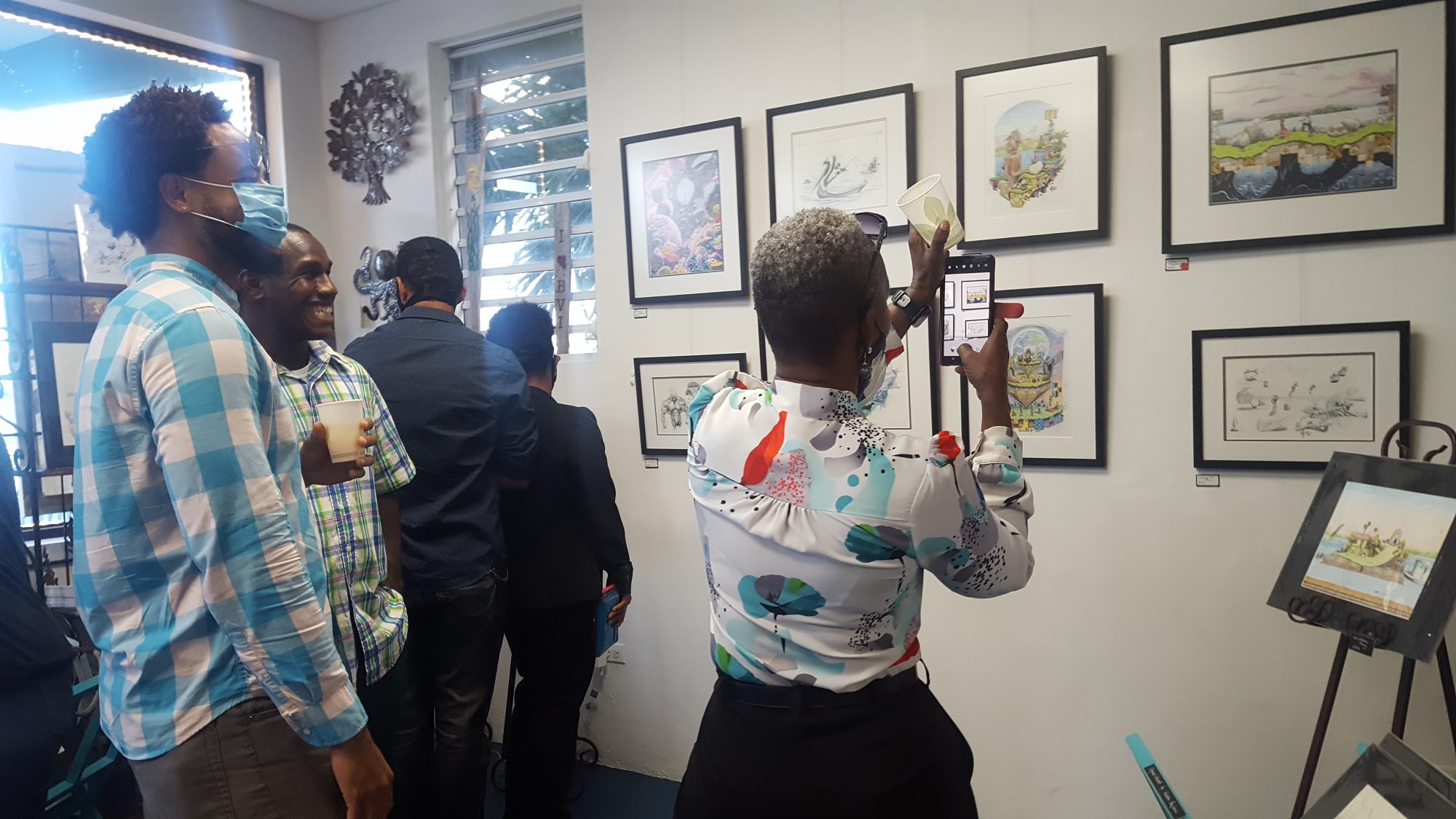 Art series back under way

In the colourful drawing “A Song of World Peace,” a man with a guitar surrounded by animals sits on a platform, while animals and people from different parts of the world listen to the music on two platforms below him.

Though the elements of the drawing come from scenarios seen in the Super Mario video game franchise, the concept is one that Walden Benjamin imagined first before drawing.

“It signifies unity and peace and togetherness,” he said during an art show last Thursday at Nutmeg & Co.

It was Mr. Benjamin’s first solo show, and friends, family members and other supporters attended to admire and purchase his drawings. Many of Mr. Benjamin’s original pieces were on display during the show, and during an interview he explained his creative process.

“From very young I loved to do drawings. A lot of things inspire me,” he said. “You could say I tend to live off of comic books, video games, cartoon media, and all of the like. I tend to play around with the concepts.”

Many, if not all, of his drawings incorporate Caribbean life too. They include beaches, underwater imagery, Caribbean figures and characters, fruits, mountains and trees.

“What I appreciate is that you can tell where his inspiration comes from, but he’s able to have his own unique mark,” said friend and fellow artist Kenrico Wheatley Jr. “You just know that this is Walden.”

The reputation that Mr. Benjamin earned as an artist has been a long time coming. Nutmeg & Co. co-owner Annie McPhail said he has been drawing since he was 4 years old.

“Everybody knows him as someone who is always sketching,” she said.

The gallery and gift shop typically holds quarterly art showings, but it went “almost a year without one” during the pandemic period, she added.

The series restarted in December, when it featured artist David Thrasher. Ms. McPhail said in order to keep the numbers low, people were asked to pre-register for the show.

Last Thursday, there was no pre-registration, but there were still safety measures in place.

“If there were too many people inside, we’d ask them to go outside and wait,” she said. “The type of shoppers and art-lovers we have, they will definitely wear a mask. We had a good crowd that was sensible.”

When Mr. Benjamin walked into the art space and saw people gathered to support him, he said it felt “overwhelmingly awesome.”

“Most times I’m just used to posting on social media, but to actually have it out here right now where all of my family and friends are watching, it’s very heartwarming,” he said.

He hopes to become a full-time artist and learn from other VI artists as he continues drawing.