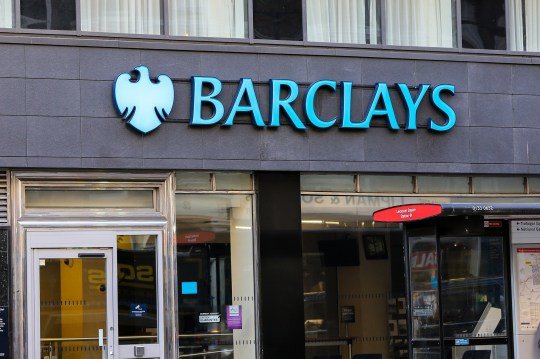 Barclays is waiving overdraft interest fees for a month, as many other banks offer support to those suffering financial problems amid the coronavirus outbreak.
A statement from Barclays on Wednesday said the company would stop charging interest on personal current overdrafts between 27 March and 30 April.

HSBC confirmed last week it was introducing a temporary £300 interest-free buffer on overdrafts for customers with its Bank Account and Advance Accounts for a period of three months from March 26.

Lloyds followed suit today, saying customers of Lloyds Bank, Halifax and Bank of Scotland would automatically be able to access a £300 interest-free overdraft from April 6 to July 6.

Nationwide has also confirmed it will waive interest for those struggling due to the impact of coronavirus on credit cards and overdrafts, as well as increasing credit limits where needed.

However, decisions will be made on a case-by-case basis, the company added.

Gillean Dooney, managing director at Barclays said it was ‘crucial’ to help customers through this ‘challenging time’, as the virus infects more than 8,000 people across the UK.

She added: ’We have therefore decided to waive all overdraft interest until the end of April, meaning there will be no charges for customers to use their arranged overdraft.

‘We are reviewing all options to help customers after this time to ensure we support those in financial difficulty.’

Vim Maru, Retail Director Lloyds Banking Group, said: ‘Being there for our customers when they need us is our priority. The introduction of the £300 interest-free overdraft will give our customers some important breathing space at this difficult time.

‘We will be implementing changes to our overdraft interest rates in April meaning all customers will pay less for their overdraft than they do today.’

Tracie Pearce, HSBC UK director of retail banking said: ‘With this temporary buffer for the first £300, up to nine in ten customers who use an overdraft will see no additional cost, based on our previous structure.’

The changes are set to take place automatically, meaning customers will not need to get in touch with banks to take advantage.

On Wednesday, it was announced that Prince Charles had tested positive for coronavirus.

The Prince of Wales, 71, has ‘mild symptoms’ of Covid-19, which has killed 424 people across the UK. He otherwise ‘remains in good health’, a spokesperson for Clarence House said.

Meanwhile, a study from researchers at the University of Oxford claimed up to half of the UK population may have already contracted the illness.

New measures to help the millions of self-employed people through the coronavirus crisis are set to be unveiled this week.

Boris Johnson said in parliament today the government would set out ‘in the next couple of days’ what support it would give to workers.
#COVID-19  #Covid  #Coronavirus  #Boris Johnson
Add Comment