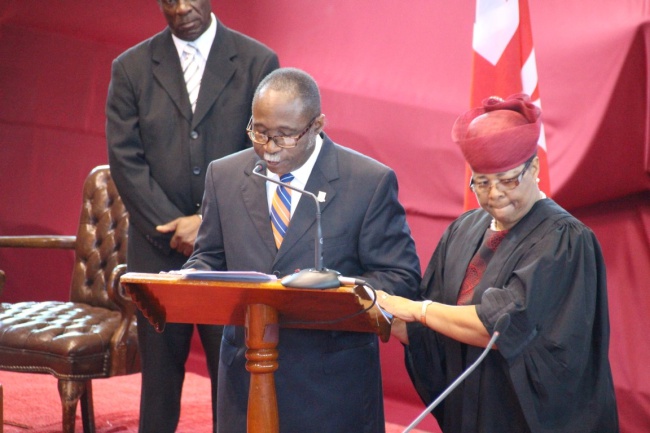 Best for the job! Fraser now the leader of a one-man Opposition

Newly appointed Premier, Dr Natalio Wheatley said it was in the best interests of the Virgin Islands for there to remain an Opposition and he believed that senior legislator in the House of Assembly, Julian Fraser, was best suited for that job.

Now being the only member of the parliamentary opposition, Fraser, the Third District Representative, will be appointed as Leader of the Opposition.

When asked whether it was Fraser’s decision to not be included in the National Unity Government, Dr Wheatley said he would not say it was Fraser’s choice, but that he believes it was in the best interest of the territory to have an opposition.

“I thought he was the best person but of course, that was not my decision. But his inclusion in the government we thought it best if we take two members, one from the National Democratic Party and one from the Progressive Virgin Islands Movement and we thought that was best for our Cabinet,” the Premier said.

In relation to Fourth District Representative and opposition legislator Mark Vanterpool, Dr Wheatley said he has chosen to support the government and crossed the floor to become a part of the new government of national unity.

In the meantime, Dr Wheatley said the move to revoke disgraced premier, Andrew Fahie’s appointment and install a new government was an important step in stabilising the territory and moving forward to a brighter future.

“We had a vote of no-confidence against the Premier and of course, we were damaged badly in terms of our international reputation and even in terms of the confidence of our local people in their governance so that was an important step,” Dr Wheatley said.

“The unity government was an important step as well so that persons can see that we can put aside partisan differences and do what is in the best interests of the people of the territory which is what people are looking for,” he added.

The Premier noted the best way to inspire confidence moving forward is through taking swift actions, especially on the Commission of Inquiry Report recommendations. He noted the COI Report revealed a lot of shocking and alarming things, but said those revelations were things the government knew needed to be fixed over a long period of time.

“There must be a real commitment to reform. So, the details of that are being worked out in a proposal that will go to the United Kingdom. Hopefully, they will accept our proposal and we can avoid the partial suspension of our constitution. It is going to take real work; it is going to take real commitment, but this government of unity is committed to doing that,” the Premier Wheatley said.