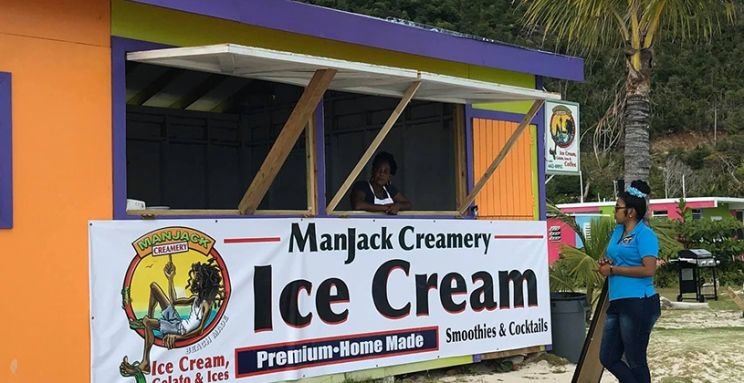 Local businessman, Mr. Hezikiah Maddox took to social media to decry that he will close his business in response to the Labour Department forcing him to hire someone not suitable for his business.
In this instance, the individual Maddox is seeking to hire requires a work permit while Labour is insisting he hires a local.

Maddox, who operates an ice cream business, said, "it is with a heavy heart that we are forced to close ManJack Creamery. The Labour Commissioner, Ms (Janice) Rymer, wants to force this business to hire someone who is good for the country, but not a good fit for our business."

He went on to state, "before we are forced to lower our standards and add to the already poor customer service climate in our beloved British Virgin Islands: We will respectfully close our doors."

Many residents quickly sympathized with the businessman. It is law for businesses to give first preference to a belonger for any vacancy. In the midst of the COVID-19 pandemic, Government is said to be placing greater emphasis on the hiring of locals.

Hon. Vincent Wheatley, Minister of Natural Resources, Labour and Immigration quickly responded to Maddox on social media where he defended the position by the Labour Department on his Facebook page.

"As the Minister responsible for Labour I cannot in good conscience let this float around without responding to it. The records show that he was sent about a dozen locals to fill that position, his attitude was that he would rather close than hire a local," the Labour Minister said.

Hon. Wheatley added, "If this is your attitude in this country at this time, good luck. I will not be threatened, blackmailed or held hostage for trying to help my people in this most difficult of times."

Speaking more to the issue, Maddox's daugther defended her parents during a string of social media posts.

"They were sent 18 candidates from labor between January and today and they hired 3 local candidates. All 3 did not work out for various reasons and in going with their 3rd choice who requires a work permit they are now being forced to hire someone else. This isn’t for the betterment of the territory. No one wins in this situation," Adya Maddox argued.

Debates have reignited over the need to protect locals in the workforce in wake of COVID-19.

On Friday, Premier and Minister of Finance, Hon. Andrew Fahie defended the Government's decision to lockout work permit and work exempt employees, stating that they have to protect the job market for residents. He also pointed to the over 300 persons who recently graduated.
#COVID-19  #Covid  #Fahie  #Facebook
Add Comment