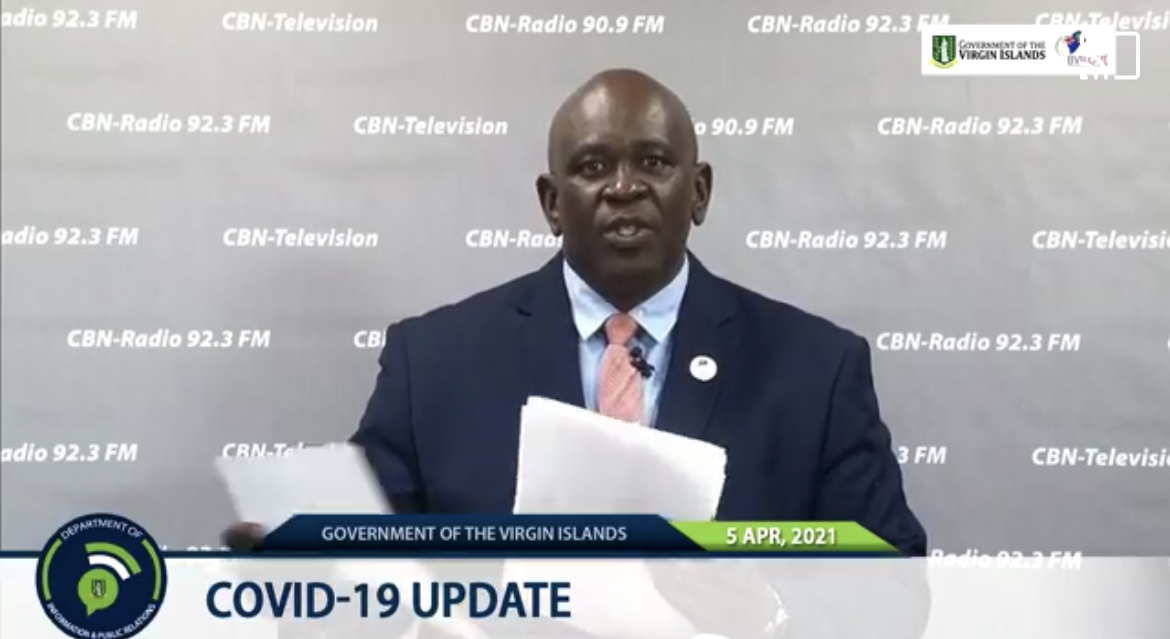 BVI Covid-19 cases rises to 18! Residents are still reluctant to take the first jab of vaccine

According to an official Government update, the BVI’s toll of Covid-19 cases has increased to 18.

This was confirmed by Minister of Health and Social Development, Honorable Carvin Malone who said “as of today April 5th, of the 178 positive cases diagnosed there was 1 untimely death, 159 cases have recovered and the number of active positive cases in the Territory now stands at 18.”

“This accounts for 14 persons on Tortola, 1 on Anegada, and 3 on marine vessels. Based on the epidemiological summary provided by the Public Health Unit team, 4 of these cases were captured in the arrival Day 0 screening, 7 on their Day 4 screening, and 3 through Travel screening. A concerning reality is that we now have 4 local cases, one of whom is hospitalized, though, for other non-COVID medical conditions,” the Minister later continued.

Honorable Malone stated that of the 18 cases, 7 were returning tourists or cases within the population and as a result, Health Officials are actively engaging in contact tracing and providing opportunities for persons to get tested who may have been exposed.

“Seven (7) of the 18 active cases in the Territory were either returning tourists or cases within our population. Persons occupying common spaces with positive cases were asked to self-isolate for a period of 10 days. Persons in direct contact with positive cases were asked to quarantine to avoid the risk of spreading the virus to unknown and unassuming persons within the Territory. As a result of these facts, active and aggressive contact tracing exercises and COVID-19 testing have commenced on Tortola and Anegada. I am pleased to report that the Public Health Unit and the Community Health Unit of the Hospital Services Authority have been actively engaged in the contact tracing activities.”

“Persons on Tortola with possible exposure are being notified and are expected to be tested on Tuesday, April 6th and Wednesday, April 7th at the Ebenezer Thomas Primary School in Sea Cow’s Bay between the hours of 9:00 a.m. to 12:00 noon,” Honorable Malone added.

The recent spike was traced to a visitor who recently returned to the BVI to attend a funeral service.

Once prompted by Media, Health Officials stated that an error was made in the issuing of a Quarantine Clearance letter to the individual on March 25th after conducting a test the day before on March 24th.

They clarified that the document was quickly retracted and the individual was made aware of their positive status and instructed to remain in quarantine.

The visitor then requested confirmation testing and received two additional (2) positive test as of Friday March 26th, one day prior to the funeral however, was determined to attend the funeral service and officials say went against their orders and attended the funeral despite their instructions.

This has resulted in new Cabinet decisions which now include:

*  Crowd sizes for indoor and outdoor establishments being reduced from 200 to 75 persons;

*  Crowd sizes for faith-based services; graduations; weddings and funerals being reduced from 200 to 100;

*  Written application for crowd sizes for outdoor events of more than 75 persons shall be made to the Minister for approval and;

*  Recommended to the National Security Council that the Curfew Order remains in-force from 2:00 a.m. to 5:00 a.m. This order will expire on the 15th of April.

Though cases continue to rise, there is still a high level of reluctance from residents to take the vaccine. BVIslanders are showing up in the lowest numbers.

Honorable Malone is imploring the public to be vigilant and mindful as the vaccines may soon expire.

“The BVI has been fortunate to receive 32,000 doses of the AstraZeneca Vaccine from the United Kingdom and 2,000 doses from the Government of Dominica. The first shipment of the vaccine has a shelf life of early May; the second shipment’s shelf life is early June and the third early July.”

“Given the global position of availability of vaccines, it is critical to use what we have and not allow for any spoilage as at some point there will be a shortage of vaccines which will impact our efforts, our safety, our economy, our schools, and our livelihood,” the Minister added.