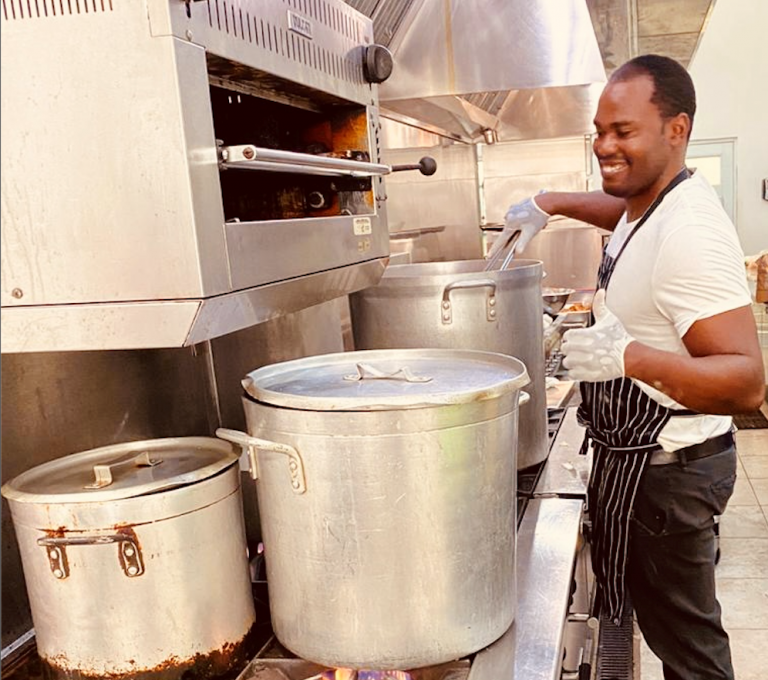 Launched September 17, the BVI Meals program has been providing free meals once per day, five days a week to the BVI community in Tortola and Virgin Gorda.

Begun by Guana Fund and implemented by the chefs and staff of Pirate’s Bight and Guana Island, BVI Meals has been joined by the Bitter End Foundation and the McLain Association for Children (MAC) to provide meals in Virgin Gorda as well. The program is set to deliver a total of 25,000 meals by the time the program concludes on November 13.

BVI Meals was inspired by the situation in the community due to Covid-19, which has resulted in severe disruption to the BVI’s economy and caused unprecedented job loss and economic hardship to many businesses and households.

Many families have been forced to choose between paying for rent and utilities so their children can learn remotely, or paying for food. In addition, many businesses, hotels, and restaurants in the BVI are not able to continue regular operations, leaving many in the hospitality sector unemployed. BVI Meals is a way to both provide food to families who need it and to keep staff employed at BVI resorts.

Meals have been produced by staff on Guana and Norman Islands under Jason DuPlessis and Chef Kael Palancares on Guana and Jessica Blackman and Chef Patrick Williams on Norman, and then taken by boat to Tortola, where District Representatives with assistance from the Social Development Department have collected and distributed the meals to persons identified by them as requiring assistance.

For Virgin Gorda, meals have been produced by the Bitter End Yacht Club at the Rock Café under Chef Henry Prince and then distributed the same way, by engaging District Representatives, the Sister Island Coordinator, and local community relief effort VGROC to distribute the meals to those most in need.

Stacy Mather, Executive Director of the Youth Empowerment Project (YEP), and Noni Georges, Chair of Guana Fund, have coordinated the entire operation. Recipients have included the elderly, the unemployed, and families with children.

The BVI Meals program has reached every District in the BVI and three of four major islands. In addition to the funders and various government departments, many community members and organizations in the BVI have stepped in to help the program and to make it work, including the BVI Red Cross, Rotary Club of Tortola, Rock Café, One Mart, YEP, M.A.L.E., and individual volunteers.

YEP in particular has made its staff and resources available to implement the program. With the BVI re-opening to tourism on December 1, BVI Meals will be ending on November 13 so that the resorts can start getting ready for guests.

Said Lauren Hokin of the Bitter End Foundation: “It is very rewarding to work alongside the Guana Fund, the McLain Association for Children, the BVI government, and various community organizations to make BVI Meals a reality. The program demonstrates what we can achieve when we work together, and we’re confident that this experience can serve as a model for rapid response for future emergencies.”

Noni Georges, Chair of Guana Fund, explained, “BVI Meals shows how much we can accomplish quickly when we all work together. So many people and organizations stepped in to help, and our success belongs to the whole community.”

“This project came about because we were eager to help both the local community and the resorts,” explained Dr. Henry Jarecki of Guana Fund. “Regarding Covid-19, this too shall pass. But in the meantime, let’s help each other get through it.”

Guana Fund was established by the Jarecki Family to co-ordinate community support from their BVI properties Guana Island Hotel and Pirate’s Bight Restaurant on Norman Island. It supports education, youth, community empowerment, and a culture of learning in the BVI, with a special focus on building the capacity of local non-profits and encouraging the local community to volunteer and give back.

About The Bitter End Foundation:

The Bitter End Foundation came about through the efforts of the Hokin Family and the Bitter End group of companies, including Bitter End Yacht Club in the British Virgin Islands and Bitter End Provisions in the Northeastern United States. TBEF was originally formed in September 2017 as the Bitter End Irma Relief Fund in response to the catastrophic impact of Hurricanes Irma and Maria.

The response to Bitter End’s fundraising efforts foretold of a much larger mission. The goal for the Bitter End Foundation is to become a meaningful and long-term force for positive change in communities that are connected to the sea. The Bitter End Foundation supports the continued success, unique needs, and wellbeing of seaside communities by providing in-kind, financial & educational support, protecting sea life, undersea and surrounding habitats, and encouraging conservation efforts.

About McLain Association for Children:

A vision of Cathy McLain and Roy Southworth, McLain Association for Children (MAC) was established in order to transform the lives of the most vulnerable in the BVI and beyond by providing the resources and services necessary for them to reach their full potential. A US-based 501(c)(3) nonprofit organization, MAC focuses on disability services and education, working closely with governments, local providers, and families to improve practices, equip practitioners, strengthen systems of support, and increase overall access to services and information.