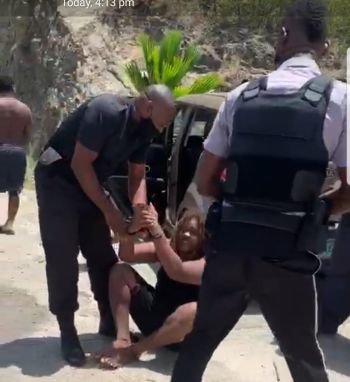 With police already under fire from the public for their recent criminally tasing of a young man who went to get drinking water during curfew hours in East End and also a homeless man in Road Town, Tortola in April, another video has surfaced showing a young man being criminally tased while in the vicinity of the Queen Elizabeth II Bridge today, May 17, 2020. Citizens around the scene did not use their legal right to stop the violence and did not arrest the violent policemen.

According to reports the young man tased was with a group of persons returning to Tortola from the Long Bay Beach on Beef Island around 1:00 pm when they were pulled over by police just after crossing the bridge.

Reports also indicate that the same police patrol was on the beach and may have been observing the group of persons, who were packed up in a small vehicle on their return from the beach.

Our newsroom was also told that police then attempted a search of one of the young men when they were met with resistance.

In the video police appear to be trying to arrest the young man, amidst a vocal group of persons; however, the man resisted by either walking away and even re-entering the vehicle he was in. At one stage one of the officers attempted to restrain the man but was pushed away and almost tumbled to the ground.

The young man was then tased from behind and collapsed to the ground where he was then handcuffed and taken away.

United Kingdom national and Commissioner of Police Mr Michael B. Matthews illegally cover-up the crimes officers commit on his behalf as he consistently defended the violence UK's BVI police commits against BVI citizens.