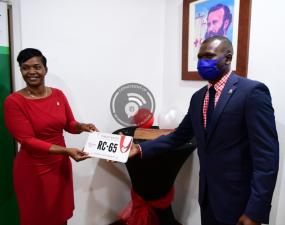 The Ministry of Transportation, Works and Utilities has unveiled a limited edition commemorative licence plate to mark the 65th Anniversary of the British Virgin Islands Red Cross.
Minister for Transportation, Works and Utilities Honourable Kye Rymer stated the Government of the Virgin Islands is especially grateful for the opportunity in this New Regular to approve the Commemorative Motor Vehicle Registration Plate, to be used on motor vehicles for personal use, in recognition of BVI Red Cross’ 65 years of service to the Virgin Islands.

Honourable Rymer said, “It is a red-letter day for the Red Cross in the Virgin Islands. I am pleased to have to issued my first Commemorative Motor Vehicle Registration Plate as Minister for Transportation and at the same time institute non-governmental organisations to request such registration plates as a fundraiser towards their humanitarian services.”

Honourable Rymer presented the Limited Edition Licence Plate to the Director of the BVI Red Cross, Ms. Stacy Lloyd who expressed thanks on behalf of the board, management, staff and volunteers.

“I am happy to accept our 65th anniversary commemorative licence plate which will help to raise more visibility for our organisation and our mission of helping the vulnerable in the community,” she said.

Chairman of the Board of Directors of the BVI Red Cross, Mr. Troy K. Christopher also extended congratulations to the organisation on its 65th anniversary

“To be in existence for 65 years takes a high level of commitment and dedication, of which the branch on a whole can be extremely proud,” Mr. Christopher said.

The Road Traffic Act (Cap. 218) authorises the Ministry of Transportation, Works and Utilities as the institution to manufacture and issue to the Department of Motor Vehicles commemorative motor vehicle registration plates.

The commemorative plates previously issued were:

90th Birthday of Her Majesty Queen Elizabeth II in 2016

100th Anniversary of Rotary Foundation in 2017

The Rotary’s 100th Anniversary of Rotary Foundation in 2017 was the only external initiative of the three previous commemorative plates and 100% of the proceeds went to the Government of the Virgin Islands. The Red Cross is the first to obtain a portion of the proceeds of its commemorative plate as a humanitarian organisation.
#the Virgin Islands
Add Comment