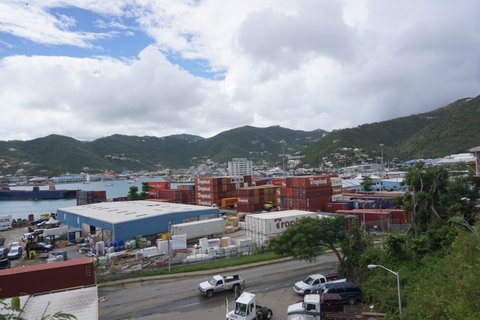 The state-owned BVI Ports Authority (BVIPA) has refused to say how much of the public’s purse was spent for the recently-acquired Chateau beachfront property on Virgin Gorda.

Leading up to the BVIPA’s October 9 announcement that they acquired the property, BVI News made several attempts to get information relating to the cost of the purchase.

Our news centre was prompted to start its inquiry after sources reported that the property — which was owned by close relatives of a sitting legislator — had been purchased at an estimated $5 million.

While contacting the BVIPA’s Deputy Managing Director, Oleanvine Maynard on Thursday, October 8, she confirmed that the BVIPA had indeed acquired the property but said the reported $5 million price tag was not accurate.

She then promised to issue a statement with all the accurate information relating to the acquisition of the property. Subsequent to the Authority releasing a statement the following day, BVI News observed that the name of the property, the price of the sale, and the appraisal quote of the property were all excluded from the media document.

Those omissions prompted our news centre to make further contact with the BVIPA Deputy Director, who said at the time of answering, that she was not in close proximity to the documents to give a precise quote. She then gave the directive to contact her at a later time during that day.

Run around by the BVIPA

Several subsequent attempts were made to call Maynard before getting through. And during that over-the-phone conversation, Maynard said she gave consideration to our news centre’s request and felt that it would not be in the BVIPA’s interest to disclose the amount paid for the property at this time.

BVI News then explained that the information is of public interest as it was the taxpayers’ money that was used to acquire the property. Maynard then stated that she would have the information within the next five minutes.

More than 40 minutes later, an employee from the BVIPA contacted our news centre and informed us that Maynard was “unfortunately scheduled for several meetings” and was therefore unable to grant the requested information during the day.

BVI News had also made contact with the recently-appointed Managing Director of the BVIPA, Dean Fahie who told our news centre that Maynard was the Port Authority’s point-of-contact on the matter.

According to the aforementioned media release by the BVIPA, the acquisition of the Virgin Gorda-based property is to expand the St Thomas Bay port facility on the sister island.