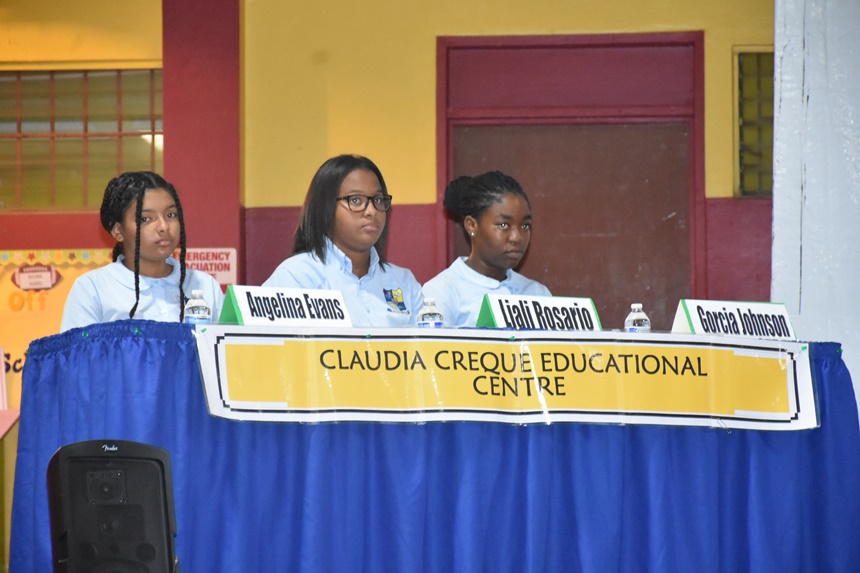 Cedar and Claudia Creque advance to semi-finals of school debates

Cedar International School (CIS) and Claudia Creque Educational Centre (CCES) are through to the semi-final round of the 2020 Inter-Secondary School Debates.

Competing in the first debate of the preliminary rounds on Monday, CIS defeated St George’s Secondary School (SGS) by 94 points; winning with 603 points while to their opponent’s accumulated 509.

Representing CIS were Amelia Adamson who won Best Speaker, Hailey Chomiak, and Jaleel Cameron who argued in favour of the moot: Parents should be held legally responsible for illegal behaviours of their underage children.

To support their argument, Cedar referenced local articles regarding the subject of underage children being made to ride motor scooters. They further quoted law enforcement officials who said they (the law enforcers) would hold parents responsible for gifting their children with these bikes.

St George’s, who argued in opposition of the moot, had the trio of Nyobi Padmore, Venus Williams and Chris-Tiyah Roberts.

Their key points were that parents are not the only ones that influence the behaviours of children, the decision-making component of a child’s brain is still developing, and that it is hard to differentiate between parents who teach their children to be moral citizens from those parents who do not.

SGS, therefore, concluded that instead of holding parents legally accountable for their children’s criminal actions, society should be the ones to deal with the root of the problem.

In the second debate of the evening, CCES defeated the Virgin Islands School of Technical Studies (VISTS) by 129 points; winning 584 to 455.

The CCES team consisted of Gorcia Johnson, Liali Rosario and Angelina Evans who won the Best Speaker award. They argued in favour of the moot: Popularity of skin lightening is testament to the racism/colourism that plagues Caribbean society.

Referring to the islands of Jamaica – prominently known in the Caribbean for skin bleaching – Barbados, and Puerto Rico, CCES argued that the popularity of skin lightening is found in places where slavery and racism have deep roots.

They further pointed to a body of research which stated that internalised racism has resulted in persons bleaching their skins to achieve a lighter complexion close to their colonisers, in an effort to enhance their quality of life and improve their self-image.

On the other end of the argument was the trio of Chevan Richards, Alyssa Butler and Kyle Grant representing VISTS.

Their position was that many other reasons exist as to why persons choose to lighten their skins that have no relation to racism or colourism.

Using popular Caribbean dancehall artiste Vybz Kartel as a reference, it was argued that skin bleaching for many in the Caribbean is simply a trend of fashion and a form of self-expression.

The trio further said that for many persons, skin bleaching is done as a mere accessory, similar to persons who choose to dye their hair or wear weaves, paint their nails, or even use different colour contact lenses.