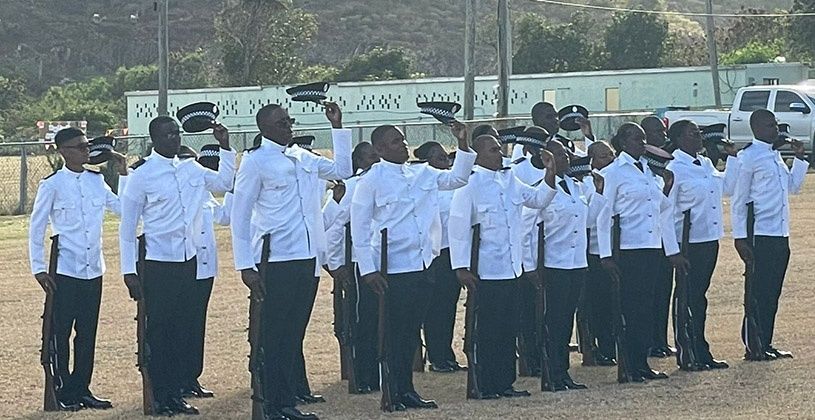 Challenge Yourselves To Break Barriers - Top Cop To Recruits

Commissioner of Police Mark Collins was among the high-ranking officials who imparted words of wisdom to the newly graduated police recruits on Thursday, April 21.
In addition to congratulating the officers and reminding them of their potential, he also asked them to challenge themselves to break barriers and to continue to strive for excellence.

He invoked the words of Thomas Edison about the importance of knowing the difference between being busy and being productive.

"Being busy does not always mean real work. The object of all work is production or accomplishment and to either of these ends there must be forethought, system, planning, intelligence, and honest purpose, as well as perspiration. Seeming to do is not doing.”

In doing so, he confirmed he was confident that each of the new recruits had been guided by Edison’s principle of dedication that leads to success. He maintained that the successful completion of both academic and in the field training, was a clear testament to the cohort’s hard work. For this reason, he proudly referred to them as “the cohort to be reckoned with”.

He announced to the officers, who had been drenched by rain during the ceremony at the H. Lavity Stoutt Community College's (HLSCC) Paraquita Bay campus that each has put their shoulders to the wheel.

"You’ve studied and learnt the principles of policing; you questioned to clear up ambiguities, and when tested, you showed depth in understanding," the top cop stated.

He also revealed that due to Cohort 5’s diligence and tenacity, they were able to achieve some of the highest scores achieved in the history of the programme.

Although they were able to distinguish themselves from some of their predecessors, Commissioner Collins is certain that members of cohort 5 will evolve and achieve greater feats and accomplishments than they currently have.

“I look around and wonder who among you will rise through the ranks to Chief Inspectors, Superintendents or even Commissioner? Who has the desire, the discipline, the determination, and the strength of character necessary?” he pondered.

He encouraged the recruits to embark on a life-long journey or learning and discovering the intricacies of effective policing, since there was still much to be learnt. He asked of them to be impartial and accountable when serving the people of the Virgin Islands. He also stressed that taking pride, and respect for oneself and for others, are indispensable virtues that will aid in overall effective policing.

Added to impressive accomplishments that cohort 5 were able to muster, they also had the highest percentage of female graduands in recent times.
#the Virgin Islands
Add Comment