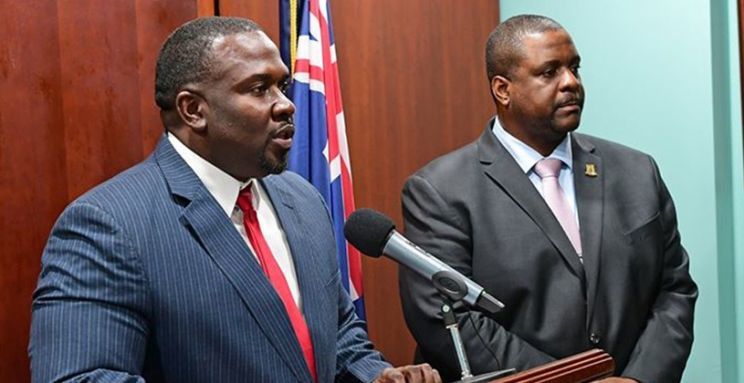 Opposition Leader, Hon. Marlon Penn, is calling for honesty from Premier and Minister for Finance Hon. Andrew Fahie on the British Virgin Islands’ financial standing.
Hon. Penn’s remarks were made against the backdrop that the territory saw a roughly $12 million increase last year despite the COVID-19 pandemic, as announced by the Premier during a recent sitting of the House of Assembly.

“If he [Premier] is counting the stimulus money that we got from Social Security Board, that’s a misrepresentation of the reality on the ground in terms of where we are financially. We all know 2020 was a difficult year, not just for the Virgin Islands, but globally but let us be honest with the people of this Territory in terms of what our true financial position is, is what I am saying,” he stated, on NDP radio on Monday evening, March 15.

The Opposition Leader said once the financial position is known the territory could make effective plans on the way forward.

“We are leaders; we were put to lead the people of this territory, not to mislead them. We should never seek to mislead the people of this territory in terms of punching the numbers. Let us be truthful about what our true financial position is and let us plan as a territory, as a people in terms of how we move forward and manage our current financial situation; and that all goes to the economic plan for the territory, so we have to be able to manage those things,” Hon. Penn told listeners.

He then pledged to “get more specific numbers” in terms of the numbers to educate the people in that regard.

He added, “because the people need to know this. Because the reality is that if we don’t know where we are economically, we can’t really plan our next step.”

Premier Fahie informed the House of Assembly on March 10 that despite the floods and hurricanes of 2017 and the ongoing pandemic, “The revenue of the Government of the Virgin Islands continues to surpass the revised projected estimates for the periods 2018 to 2020.”

The Premier provided the dollar amounts for unaudited revenue from the government of the Virgin Islands, excluding financial services and total expenditure for the periods January 1 to December 31 in 2018, 2019 and 2020.

After hearing the figures, Hon. Penn asked the Premier to explain the $12 million increase in revenue for 2020.

In response, Premier Fahie said: “We did some revenue measures, and some of them brought in some money but remember your question is void of financial services, so when you look at financial services revenue, it did drop of it being COVID-19. Overall revenue was down, but we continue to push some significant initiatives, whether it be through construction through different areas, and the government was able to do business with some of the amendments we came in here and make. So we were able to push forward with some revenues for 2020 beyond the other years, but overall revenue was down.”

Hon. Penn then pointed out that the details are needed because “it is virtually impossible for us to be shut down since March, just open up our territory in December, many of the businesses were closed, and you are saying that you had a $12 million increase during the time that we were shut down during COVID-19 than the year before.”

Premier Fahie said if the figures are analyzed in isolation, that would be the case.

“We had unexpected sales in natural resources and labour that came up with some stamp duty; we did have some other things coming up towards the end of the year that increased the revenue. So there were some factors that increased revenue, but when you add revenue together with Financial Services, revenue was still down.”

He said the stimulus received from the Social Security Board would have been recorded on the books under revenue.
#COVID-19  #Covid  #Fahie  #the Virgin Islands
Add Comment