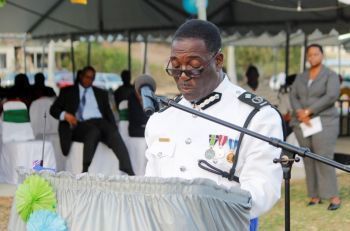 A September 3, 2021, release from the force noted that Deputy Commissioner of Police Alwin James submitted his retirement letter from the Force which will come into effect at the end of January 2022 after almost 37 years.

A September 3, 2021, release from the force noted that Deputy Commissioner of Police Alwin James submitted his retirement letter from the Force which will come into effect at the end of January 2022 after almost 37 years. He began his pre-retirement leave on September 1, 2021.

In an email to James circulated Force-wide, the Commissioner shared his gratitude to the Deputy for his years of service to the BVI community and his leadership within the RVIPF. Other ranks also expressed their appreciation for the Deputy’s guidance and contribution to the Force. Before being appointed to the post of deputy, he climbed the ranks as detective within the Crime Division to become Superintendent of that division.

Michael Matthews, who worked closely with the former deputy, noted that James admirably led in various capacities throughout a significant portion of his career including Acting Commissioner for close to one year.

“My successes as Commissioner for the five years in office had been due in part to the work of Alwin James. I have nothing but admiration for him. The absence of his immense skill set and fortitude will no doubt be felt. I join with others in wishing him all the best in his retirement,” Matthews noted.

In notifying the Force of his departure, Alwin James shared his love for the profession and the sadness he felt in leaving despite the many challenges and adversities throughout his career. He thanked officers for their support during his leadership and recognize the great talent which exists within the organization.

Ms. Jacqueline E. Vanterpool will continue to act as Deputy Commissioner until an official appointment is made.