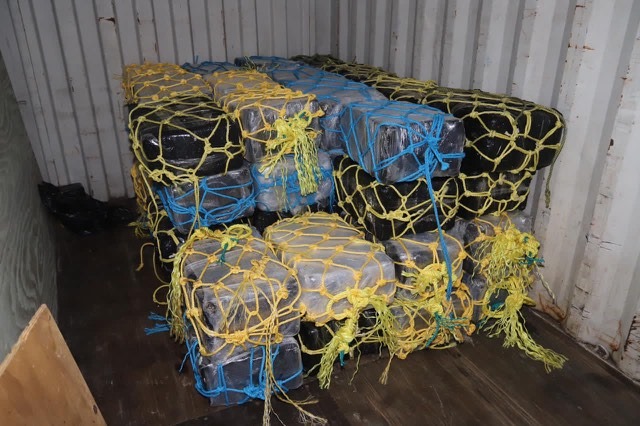 A police officer and his brother were arrested in connection to a Friday morning raid at a house the policeman has been building in Balsam Ghut, which resulted in the seizure of 2.3 tonnes of cocaine worth $250 million, making it the largest drug bust in the history of the Virgin Islands and likely in any of the British overseas territories, according to Police Commissioner Michael Matthews.

The value of the recovered cocaine is about 75 percent of the VI’s national budget, Governor Gus Jaspert said during a Tuesday afternoon press conference where he and Mr. Matthews announced the seizure.

Several people at the property fled as police arrived on the scene, and while it is unclear how many people remain at large, police have arrested Darren Davis, 41, who has been a VI police officer for 20 years, and his brother Liston Davis, 40, and charged them with three counts of possession of a controlled substance with intent to supply and keeping an unlicensed firearm, Mr.Matthews said.

During the press conference, neither Mr. Jaspert nor Mr. Matthews mentioned that the residence on the property where the cocaine was found belonged to the arrested police officer, but Mr. Matthews confirmed this fact to the Beacon after retweeting an article by The Sun, a British tabloid, that includes the information in the headline.

Although both Messrs. Matthews and Jaspert assured the public that the VI remains one of the safest places in the Caribbean despite recent violent crimes, they also warned that such a large drug operation suggests that organised crime and corruption exist in the territory.

“A seizure of this scale, especially combined with other seizures made in recent months, [indicates] serious and organised criminality here in the British Virgin Islands,” Mr. Jaspert said, adding, “There may be pockets of corruption facilitating this kind of criminal activity.”

In response to the seizure, Messrs. Jaspert and Matthews promised sweeping actions to better secure the borders and stop the flow of drugs into the territory as investigations continue.

Mr. Jaspert said he will seek additional assistance from the United Kingdom, while the HMS Medway, a Royal Navy ship that arrived in the region in late September, will continue to patrol the VI’s borders.

Additionally, Mr. Jaspert will stay in close contact with the National Security Council and government agencies as they continue to monitor the situation, he said.

Mr. Matthews also said he has contacted US and UK law enforcement agencies to request help carrying out investigations in the territory, though he added, “For operational reasons I cannot comment any further on that aspect.”

The commissioner added that the police force will employ outside expertise to conduct an internal investigation among its own ranks.

Premier Andrew Fahie, who has vigorously opposed the arrival of the HMS Medway and other UK security assistance, did not attend the press conference or release a public statement on the drug seizure as of yesterday afternoon, and he did not immediately respond to requests for comment.

Due to the covert nature of the police operation that led to the bust, Mr. Matthews said, he could not share many details about how officers targeted the residence or executed their search, nor would he say how many people escaped during the raid and could still be at large.

However, he did say that the force had been gathering intelligence for many weeks before the operation.

“We had been suspicious for some time about what may be occurring,” Mr. Matthews said. While he anticipates making further arrests, he did not provide additional details, which he said could hamper a live investigation.

Both of the accused men appeared in Magistrates’ Court on Tuesday morning, where Director of Public Prosecutions Tiffany Scatliffe-Esprit read the allegations against them.

When the officers first approached the property, they saw people hiding in the bushes and tried to chase them down but were unsuccessful, Ms. Scatliffe-Esprit alleged.

When they returned to the premises, the officers found bails containing what they suspected was cocaine, and they found similar stashes in different parts of the property, including a Ford Explorer that had two boxes filled with 10-kilogram bricks of the drug, the DPP alleged. Magistrate Christilyn Benjamin did not make a bail offer to either of the accused.

On Sunday, police also took into custody two individuals after $99,000 was recovered as they were rescued from a capsized boat that since was reported stolen, Mr. Jaspert said.

However, he did not name the individuals and said it is not clear if they have any connection to the Balsam Ghut bust.

The Friday bust comes a little more than a month after police seized 124 kilograms of cocaine and arrested seven Venezuelans during a Sept. 27 raid at an Anderson Hill residence.

Though Mr. Matthews said that there is no known direct link between these two busts, he did suggest that they were both connected to organised crime in the VI.

“We do have rival factions of organised crime,” with one seeming to “gain control of the drugs market as it comes through here and goes on to other locations,” Mr. Matthews said.

Even if there is some “connectivity” between different seizures, it doesn’t mean that the captured drugs belong to the same group, the commissioner added.

In spite of the allegations against a police officer, Mr. Jaspert urged the public to remember that the force is mostly composed of honest people doing good work, and not to lose their faith in the force’s ability to keep the territory safe.

Police departments around the world have faced similar problems, and one of the best ways to fight back is by demonstrating that the force is capable of rooting out corrupt officers, Mr. Matthews said.

The upcoming internal investigation is one such mechanism, he explained.

“What I can do is reassure the public that we take every single one of those allegations seriously,” Mr. Matthews said in reference to the charges facing Darren Davis.

But enhancing the strength of the territory’s borders and weeding out corrupt police is not enough to prevent drugs from infiltrating VI streets, Mr. Jaspert said.

Legislation must also be drafted that ensures greater transparency and makes it harder for corruption to spread amongst government ranks, he added.

“We have not done enough … to ensure that no kind of corruption can take place,” Mr. Jaspert said, adding, “We urgently need … an Integrity Commission, a modernised Police Act, an Unexplained Wealth Order,” and other laws.

Both he and Mr. Matthews said they would continue working to keep VI residents safe.

“Our mandate is clear,” the commissioner said, adding, “Those that take part in illegal activity will be brought to justice.”