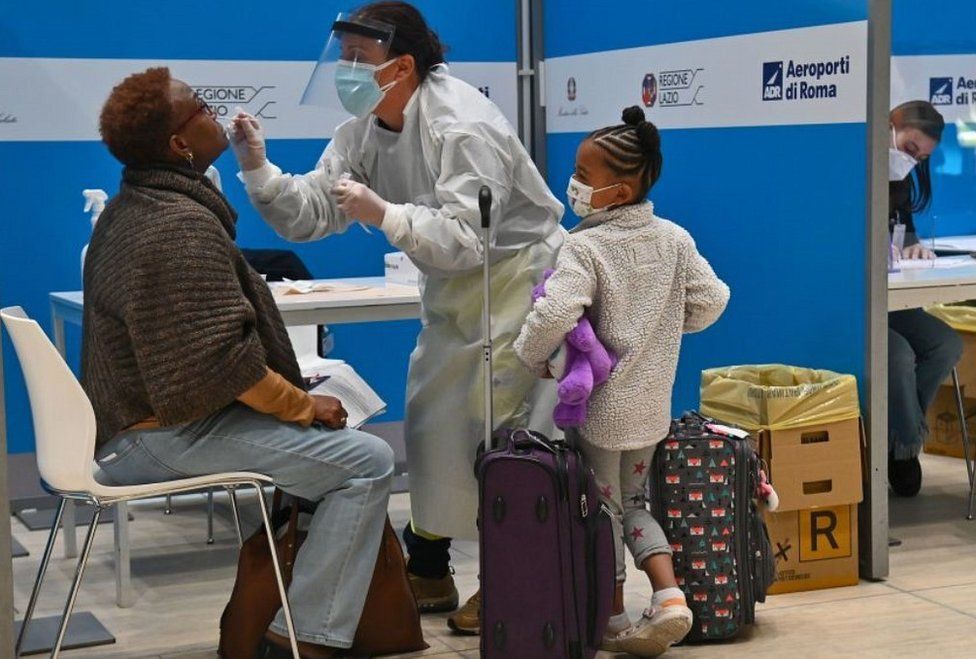 Or, it faces another gloomy holiday season of travel restrictions, quarantine rules and a locked-down leisure industry.

In a few weeks from now we will know which it is to be - but the policy decisions which will shape the outcome are already being taken.

One big question is whether EU member states will be content to leave decision-making to the European Commission in Brussels - which has bungled the vaccine-buying programme - or simply take matters into their own hands.

Greece, for example, has already struck a deal to welcome tourists from Israel if they have a vaccine passport.

And Cyprus has said it will welcome British tourists from 1 May, as long as they have had two doses of any vaccine approved by the European Medicines Agency (EMA).

The Director-General of the Cyprus Hotels Association, Philokypros Roussonides, told the BBC: "We are really delighted with this development. It's going to be really effective and very good for airlines to schedule their flights. Cyprus is traditionally a very popular destination for British tourists." 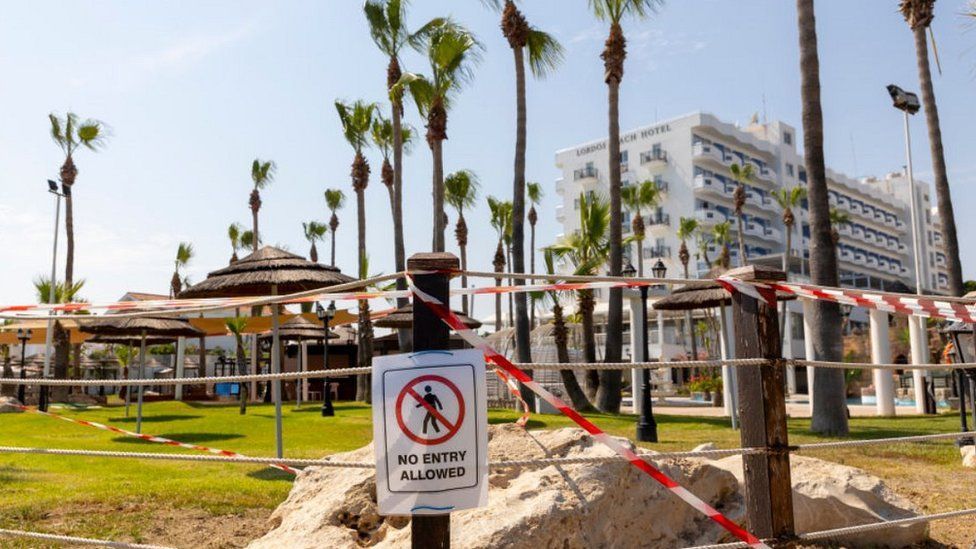 Larnaca, Cyprus in July 2020. Hotels hope for a much better summer this year

What is at stake here is not just the issue of whether wealthy northern Europeans get to enjoy a beer or an ice cream on the beach.

Tourism is big business, providing 27m jobs in Europe, and generating around 10% of the EU's GDP, when you take into account the other sectors which depend on it.

The economies of countries like Greece, Spain and Italy cannot recover until the tourist industry is reopened.

The GDP of the Balearic Islands - which include Majorca - fell by 27% last year. If a second summer season is lost to Covid-19 the consequences will be disastrous.

A tourism official in Majorca described the situation as "unsustainable" and said that if tourists were not allowed to return, many local business would disappear.

Saving the summer depends on two Europe-wide problems: getting people vaccinated and then agreeing rules about whether or not the right to travel should be linked to your vaccination status.

The chief economist of the Bank of Spain, Oscar Arce, told the Spanish newspaper El País: "If the vaccination levels are high in June, the tourist season will be saved. But if it's delayed to the end of the summer the economy will suffer a great deal. In those three months of radical uncertainty we have a lot at stake."

So far at least the omens are not good.

By the end of this week only 4.96% of Belgians and 5.5% of Germans have had at least one vaccine dose.

The Politico news service produced a fascinating calculation this week, showing that if the vaccination rollout continues at the current rate, Belgium won't reach the threshold of protecting 70% of its population until July 2023.

The date calculated for Germany was September 2022.

That would suggest we should be asking about the holiday prospects for next year or the year after - not this July or August.

Now of course the Belgian and German governments - and the European Commission - would argue that the rollout is going to gather pace as supplies improve and new vaccines are approved. And so it might.

But what those figures show is that the vaccination programme so far in the EU has been a disaster. Less than 10% of the EU population has been vaccinated so far, against 31% in the UK and 52% in Israel. 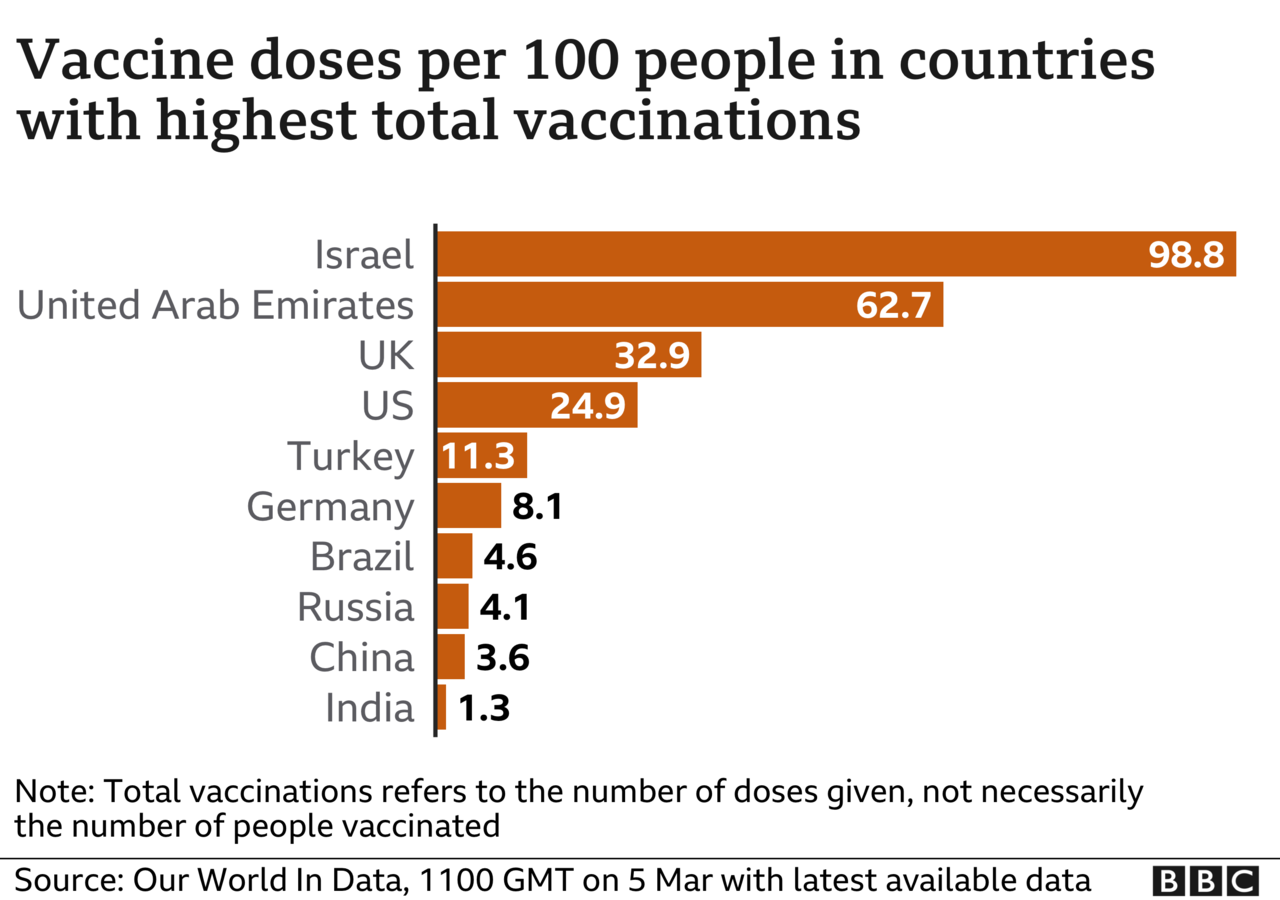 The President of the European Commission, Ursula von der Leyen, admitted last month that the EU was "not where it wanted to be" on vaccinations. But German Finance Minister Olaf Scholz was widely reported to have summed things up more succinctly, telling a meeting that the EU rollout was a "total" horror show (using ruder word than "horror").

The slow vaccine rollout has been a political embarrassment for the European Commission, which took over responsibility from individual member states and then fell far behind other countries like the United States and Israel.

It cannot afford a second failure on vaccine passports, but so far the signs are not encouraging.

German Chancellor Angela Merkel has suggested that the technical work on the issue - what sort of information a passport should show and how it might be collected and stored - could be complete in three months.

But the problems with vaccine passports are political and ethical, rather than technical.

Mrs Merkel said it was not the EU's intention that only people with vaccine passports should be allowed to travel, adding "absolutely no political decisions have been made about that yet".

Some countries including France, where as many as 40% of adults may refuse a vaccination, are uncomfortable with creating rights for those who have had the jab - rights which are not available to those who have not.

Spain, desperate to get tourism moving again, has already said it won't restrict the right of entry to travellers who have been inoculated.

But if Chancellor Merkel is right, and freedom of movement is not restricted to those who have a vaccine passport, then travellers may feel there is no point in carrying one.

Huge political decisions are looming for Europe - freedom of movement is one of the founding principles of the EU.

If those decisions are going to help save this summer then the time to take them is already running short.