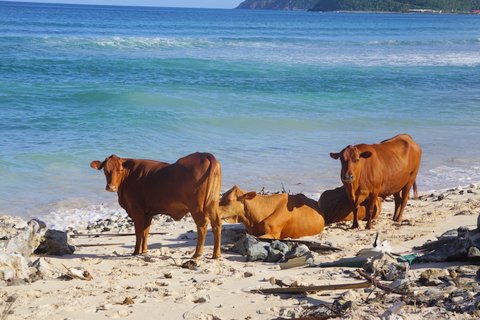 Cattle roaming freely in the Spooner’s Estate area is a cause of concern for residents who said the cows are now causing them to spend money in at least one case, thousands to protect themselves and their properties.

These concerns were made public during a community meeting held at the Enis Adams Primary School on Tuesday evening, February 4.

“These cows there seems to me like nobody responsible for them,” one male resident said.

“What we had to do was fence our entire property, and it cost us $4,000 to do that. And it hurt us. But we didn’t want to live with a tragedy because sometimes we sleeping and these cows are on our roof, and if they fall down now, we have a situation on our hands,” a female resident added.

Another male resident agreed that the situation has become unbearable because the cows have travelled to all corners of the community.

He said the seemingly wild cattle has even ended up in the cistern on his property.

“That happened to me when I was building. Actually, they fell into the cistern -two of them -and I had to pay to get them out myself with a backhoe. One died, and the next day I got it out. They are a menace,” the property owner said.

Issue reported to the Department of Agriculture

Hearing their concerns, Representative of the Second District where Spooners is located, Melvin ‘Mitch’ Turnbull, said the issue is not new to him.

He further said he has attempted to have it rectified by reporting it to the relevant authorities.

“I don’t know who they (the cows) are for. I have been receiving the reports and I have made the reports to Agriculture [Department] … but nothing seems to be happening,” Turnbull told residents.

Other residents complained about the cattle coming out during night-time hours and the danger that poses to the motoring public.

One of the suggestions that came out from the residents was the installation cattle grids that would prevent the cows from passing from one area to the next.

Minister for Transportation Kye Rymer is appealing to motorcyclists in the territory to attend a licensing and registration drive scheduled for this weekend.
British Virgin Islands
BVI
Caribbeans
World
Business
Tourism
Add Your News
×