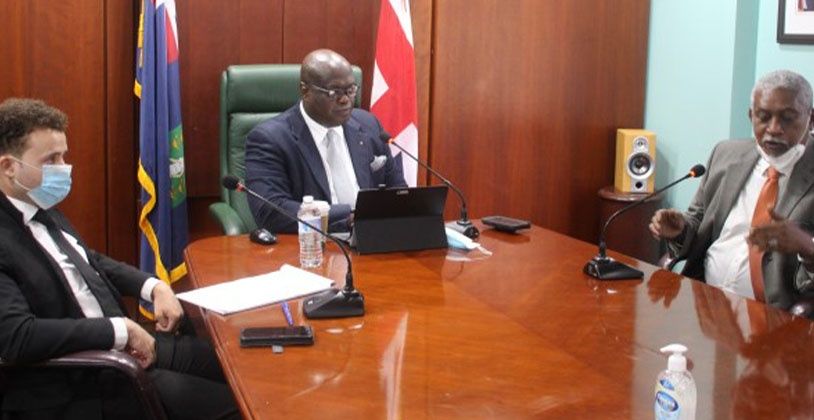 Speaker of the House of Assembly, Hon. Julian Willock has up until today, September 14 to file financial details surrounding the use of Silk Law to pursue an injunction against three UK attorneys with the ongoing Commission of Inquiry (CoI).

Acting Commercial Court Judge Mr. Adrian Jack requested the information about the contractual arrangements after receiving conflicting claims over which party is responsible to pay legal costs associated with the injunction proceedings.

The attorneys in question – Bilal Rawat, Andrew King and Rhea Harrickisson – had not yet been called to the BVI Bar, and as a consequence, Mr. Willock felt that they rendering their legal assistance to the CoI before doing so meant they were practising law illegally and wanted them to cease until the conclusion of the injunction.

Nonetheless, Mr. Willock withdrew the injunction proceedings because the acting Attorney General (AG) Hon. Dawn Smith did not grant consent. However, costs were incurred, according to court documents.

The judge went on to say that there is seemingly a legal cost dispute which needs ironing out.

The Judge mentioned that Mrs Fiona Forbes-Vanterpool of the AG's Chambers, has disputed that there was any such agreement between Mr. Willock and the BVI Government.

Not My Responsibility To Pay

Judge Jack said as a result, Hon. Willock had to file an affidavit by the close of business on September 7 explaining the funding arrangements.

In the affidavit, Mr. Willock said: “I make this affidavit to state whether the funding of the action is private or governmental in relation to this matter. I hereby confirm that I instructed the lawyers at Silk Legal (BVI) Inc. to pursue this administrative law action on the understanding that the Government of the Virgin Islands is covering the costs/fees of the matter. I have not paid for the lawyers of Silk Legal (BVI) Inc., it is not my responsibility.”

The judge said he had questions pertaining to the words “understanding” and asked the question whether it is legally binding or not.

“Secondly, with whom did he reach the understanding? Presumably to have any efficaciousness, it needed to be an understanding with the BVI Government. An understanding simply with Silk Legal would have been pointless. Mrs. Vanterpool was asserting at the hearing on 2nd September that there had been no such agreement, because it would have had to have been approved by (depending on its size) the clerk of the House of Assembly or the Financial Secretary," the judge stated.

The judge said Mr. Willock has said nothing about whether such approval was given, and if no such approval was given, how could the understanding be legally enforceable? The judge went on to asked, thirdly, who was Silk Legal’s client? Which human being agreed that the Government of this Territory would pay Silk Legal’s legal fees? Lastly, the judge stated that Mr. Willock said nothing about the alleged liability on the part of the BVI Government to indemnify him against any costs order in favour of the defendants to the current action.

“The evidence I have at present as to the funding arrangements is unclear. It would not be fair to Mr. Willock to determine this aspect of his defence to the costs application by the defendants without giving him an opportunity to explain the position. I am therefore minded to direct that this matter be clarified,” the judge explained.

As such, he ruled that he would hear the attorney but is ordering that by 4pm today, Tuesday, September 14, the Speaker of the House of Assembly, along with someone with knowledge of the facts from Silk Legal each make and swear and then file an affidavit on the e-portal.

It must include all the evidence of the agreement whether in written, oral, or electronic form.

“Once this further information is filed, I shall consider whether I can reach a determination of costs or whether I should invite further submissions,” he surmised.

Notably, Silk Legal is representing the non-Cabinet Members of the HoA, which includes the Speaker, during the ongoing CoI.

Meanwhile, Silk Legal made no-order to cost argument. Mr. Daniel Fligelstone Davies of Silk Legal appeared on behalf of Hon. Willock on September 2 and argued that the court should make no order for costs on two bases.

“Firstly, the current action was not an ordinary private law action. Rather it was an administrative action, which Mr. Willock in his capacity as Speaker of the House of Assembly could properly bring without the Attorney-General’s fiat, as would have been required for a relatoraction,” the judgement said.

Mr. Davies argued that his client was acting in the public interest and as such there should be no order of costs against him unless he acted unreasonably.

Nonetheless, Judge Jack said in his discretion the court should not recognise Mr. Willock’s public-spiritedness in bringing these proceedings so to make no order as to costs.

Judge Jack said Mr. Willock folded the moment he met a “potential difficulty” which was getting the consent of the Attorney General, which he did not obtain.

“In my judgment, he acted unreasonably in abandoning the action at the first indication that there might be procedural difficulties. It caused very substantial costs to be incurred by the defendants to no public benefit whatsoever."

The judge added, "robbing Peter to pay Paul, the second head of argument put forward by Mr. Davies was that, since the Government of this Territory was paying Mr. Willock’s legal costs and would pay any costs order made against him, it made little sense to be moving money from one government pocket to another.”