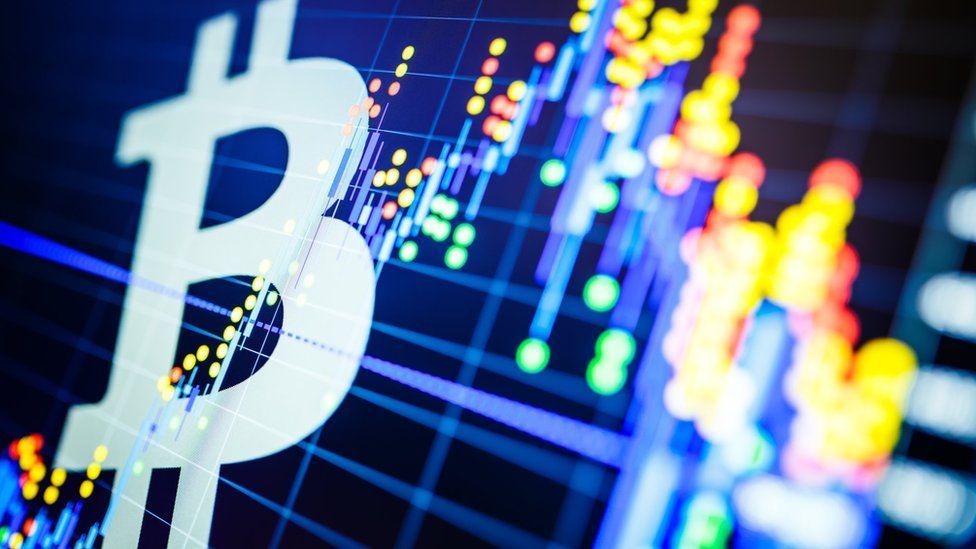 Tola Fadugbagbe recalls moving to Lagos from his small south-western town 10 years ago with dreams of brighter prospects.

Instead, the 34-year-old ended up in a series of odd jobs earning the minimum wage to survive - a typical story for many young Nigerians who are just trying to get by.

It was not until 2016 that online adverts for Bitcoin piqued his interest and he began his cryptocurrency journey.

"I was spending hours every day watching videos on YouTube and reading articles about Bitcoin. I didn't have much money so I started with $100 to $200."

It was a decision that transformed his life.

At the time that we spoke, Mr Fadugbagbe, who now trades full time and teaches budding investors, said he had cryptocurrency worth more than $200,000 (£140,000) in his possession.

"I'll soon be moving into my own house, which I'm building. I have a farm - a very big one - courtesy of cryptocurrency," he laughs gleefully, unencumbered by concerns that he could be inflating an investment bubble that will one day burst.

"No Nigerian comes to cryptocurrency and wants to look back. It's a big opportunity."

Success stories like Mr Fadugbagbe's have attracted millions of Nigerians to digital currencies such as Bitcoin.

A 2020 survey by data platform Statista revealed that 32% of Nigerians are users of cryptocurrencies - the highest proportion of any country in the world. 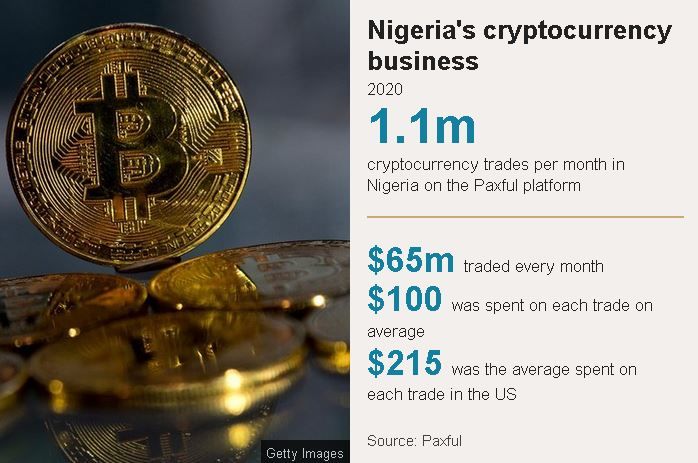 Estimates show that of the top 10 countries for trading volumes, Nigeria ranked third place after the US and Russia in 2020, generating more than $400m worth of transactions.

Although Nigeria has eased out of its second recession in less than five years, the challenging economic climate remains, making alternative sources of income and alternative currencies attractive.

The Central Bank of Nigeria devalued the currency, the naira, by 24% last year. There are fears of a further fall in value by as much as 10% this year.

Meanwhile prices continue to rise, with food inflation climbing to its highest point since July 2008.

When Michael Ugwu, the founder of a media company in Lagos, sold land he owned in 2018, he realised he needed to explore new investment opportunities.

Although his naira earnings had gone up, he was worse of in US dollar terms because of the devaluation.

"I'd made naira but lost US dollars. That's when I realised we're hustling backwards. It was then that I started to look into Bitcoin."

The move to invest in digital currencies has paid off.

"On some of my currencies I've made 50 times what I invested. On Bitcoin it's easily grown 10 times in the last year," he says.

The former banker sees cryptocurrency as an evolution of finance, describing it as "finance 2.0".

Despite the currency's volatility, Mr Ugwu sees it as a valuable tool to "hedge" or reduce the risk of living in what he describes as a high-risk environment.

His wife Onyeka started to invest when faced with high commission charges to transfer cash between her Nigerian and British accounts.

"For me it's a banking system," she says.

"It wasn't about making money. It was about how [to] have a better banking experience. Look at it as saving your money in a currency that can keep the value of the money."

Despite its appeal, economists around the world warn that Bitcoin, and other cryptocurrencies, are high-risk investments. 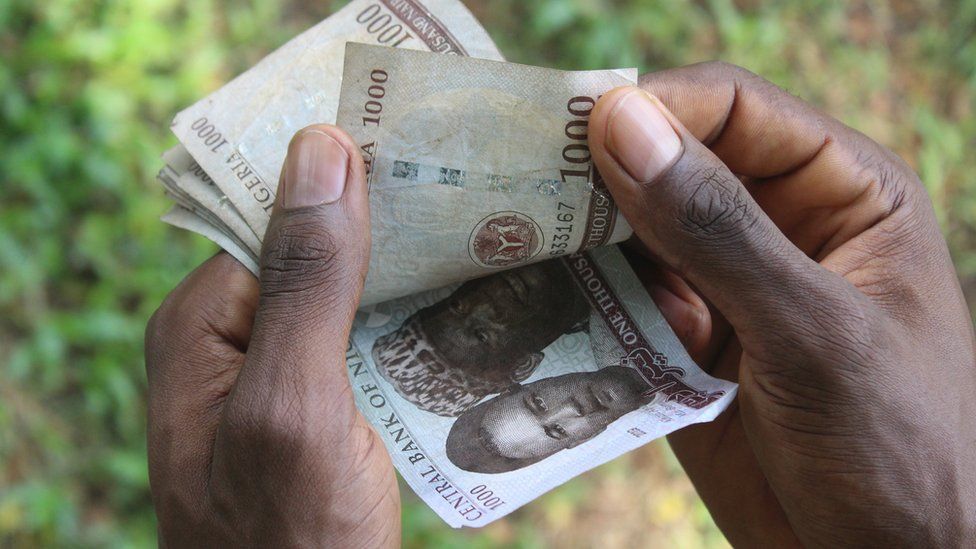 An international banker based in Nigeria, who asked to remain anonymous, says it is a financial product that carries significant potential regulatory risk.

He says that "governments and central banks have not decided whether they can, or should, regulate it".

"On a technical level I'm not 100% sure that the security that it uses is entirely foolproof. I think there are still some technical uncertainties," he adds.

In an effort to regulate the market, Nigeria's central bank banned banks from facilitating cryptocurrency-related transactions in 2017, but the ban remained largely unenforced.

However, this year the institution doubled down on its stance.

In a statement released on 7 February it cited the need to protect the general public and safeguard the country from potential threats posed by "unknown and unregulated entities" that are "well-suited for conducting many illegal activities".

Since then, many Nigerians have reported that their bank accounts have been frozen due to cryptocurrency-related activity.

Mr Fadugbagbe's bank manager called to advise him that his account would be closed, giving him a day to transfer his funds.

However, not everyone has been so fortunate.

One source says his bank account was frozen two weeks ago with tens of thousands of naira in it.

The software engineer says the bank would not disclose the reason for its actions.

He suspects he was targeted for running a cryptocurrency remittance business.

Furthermore, the BBC was shown a customer's bank correspondence, which contains the warning: "We strongly advise that you do not use your account for cryptocurrency-related activities so you don't get into trouble with the law".

However many investors with the possibility say they will continue to trade using their overseas bank accounts.

They say they can easily revert to peer-to-peer transactions. This means that rather than transferring funds between a financial institution and a cryptocurrency online trading platform, investors transfer funds directly to each other or through a middle person as they buy and sell.

'Don't shut it off completely'

This is the method the cryptocurrency community used before the development of the virtual currency marketplace ecosystem in Nigeria.

Mr Ugwu has also heard many in the business of cryptocurrency talk of relocating to potentially more hospitable environments such as Ghana, Rwanda and Sierra Leone.

The concerns of the authorities when it comes to cryptocurrencies being used for illegal purposes are legitimate but some argue that they are being too heavy handed.

A former Deputy Governor of the Central Bank, Kingsley Moghalu, believes that the country should engage and manage the risks "rather than just shutting it off completely - especially to the extent that it provides livelihoods for many people in a depressed economy".

There are also fears that cryptocurrency could become a missed opportunity, according to Gbite Oduneye who heads EGM Group, a Lagos-based brokerage firm.

"Nigeria is the third largest place for cryptocurrency trade in terms of volume," he explains. "If you don't take advantage, someone else will. Build an ecosystem round it. Put in rules and regulations."

'I trust cryptocurrency more than shares'

Nigerians also see cryptocurrencies as a way to get around foreign currency restrictions.

"There are a lot of restrictions on what we can and cannot do with our foreign exchange," Nena Nwachukwu from popular trading platform Paxful explains.

"Nigerians find it easier to use [cryptocurrency] as an investment tool." 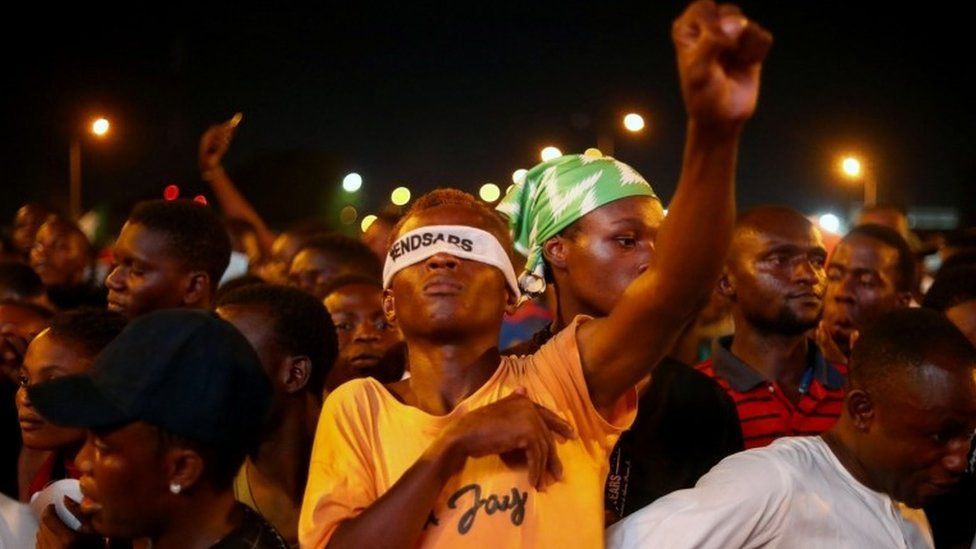 She saw awareness of their service grow in October 2020 during the #EndSars protests against police brutality.

Attempts to crack down on the organisers by freezing their bank accounts led to the increased use of digital currencies, which saw Bitcoin trend on Twitter.

Ms Nwachukwu says this resulted in a wave of new sign ups and an increase in transactions.

At the heart of the rise of Bitcoin is a distrust of centralised financial systems and top-down economic control, investors say.

Many express their frustrations with government policy and the decline of the Nigerian economy.

None more so than Mr Fadugbagbe, who spent years struggling to scrape by as what he describes as a "minimum-wage slave".

"I don't do shares and government bonds", he says. "Those are scams. I trust cryptocurrency more."

Oh ya 279 days ago
Make money? Yes you can only if you sell out to a bigger fool. Holding bitcoin does not make you any richer. It is a VERY risky stock market game. Bitcoin has no value in itself, it's value comes from others wanting to buy it so they can sell it to yet another bigger fool. And government can stop it at anytime they want and will when it threatens the national currency
View all comments (1)Add comment