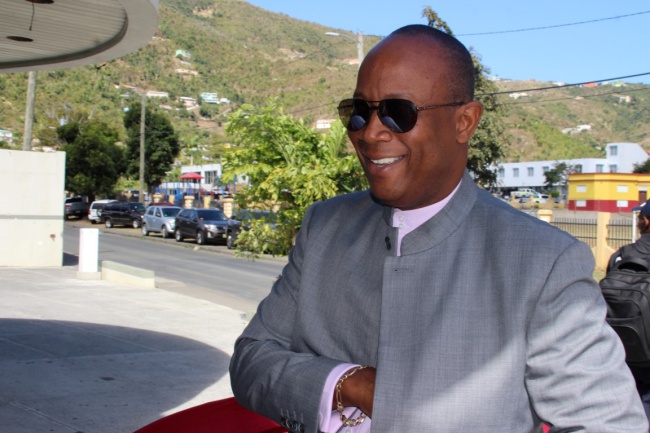 Pastor Claude Skelton Cline has said he is still under contract as a government consultant for the governing Andrew Fahie administration and is working on two major projects that will be announced soon.

While no recent publications by Cabinet suggest an extension of Skelton Cline’s contract, he confirmed still being a government consultant in a recent video interview with 284 Media.

“It’s going well. I am enjoying the journey. I’m doing what I’m supposed to be doing,” said Skelton Cline who is an open supporter of the Virgin Islands Party government.

“Though I cannot report with any specificity on what we are working on, I can say that there are two major projects that’s in tow right now and so it’s not to preempt the government’s position and they being able to come to the public, which will be their rightful position,” he added.

Skelton Cline said there were two “salient points” of his current contractual agreement with the government.

“One, I do as the contract states: whatever the Premier/Minister of Finance asks of me. There’s always that line in the contract that [also] says, ‘and anything else that he may ask’. Then the other salient point is I’m responsible for identifying new developments, new revenue streams in terms of bringing new job opportunities, new entrepreneur opportunities to the country,” he stated.

Skelton Cline who is the owner of Grace Consulting — the company under which the contract was awarded — said he believe he is constantly singled out by residents, unlike other persons who are in regular business with the government.

“I always think that don’t matter in spite what people say about my contracts. There are a myriad of contracts that’s issued in these Virgin Islands and seldom do you hear anything about any of them. But when it comes to Claude Skelton Cline, I understand that I can be a lightning rod given who I am and the voice that I lend to this country,” the clergyman stated.

Prior to receiving the $144,000 one-year contract, Skelton Cline said he previously received a six-month contract valued $98,000.

The tender process was waived for both contracts. This effectively means they were not open for bid to other companies.