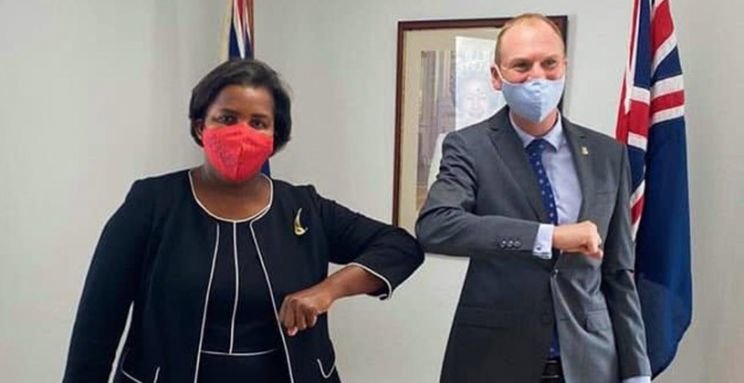 Premier and Minister of Finance, Honourable Andrew A. Fahie said that it was the ‘dawning of many new mornings in our beloved Virgin Islands,’ as he described the swearing-in of Attorney General, Hon. Dawn Smith to the House of Assembly.
Premier Fahie congratulated Hon. Smith on her appointment and stated that the Government looks forward to a harmonious relationship as its ministries and departments work together with the new Attorney General and the Chambers under her leadership.

He said, “I urge the Attorney General to always keep the integrity of the rule of law so that even Governments can be challenged to ensure that there is democracy.”

He added, “It is not about the appointment of a high post but a reminder that Virgin Islanders must remain laser-focused on our journey and appointment with destiny.”

The Premier said the day was one of hope, and one that renewed the energy of the people of the Virgin Islands to keep their hands on the plow.

“Today is a day of hope in the advancement of our people where every young boy and girl of the Virgin Islands who are in primary and high school can have the confidence to dream about taking up their rightful place in society in the BVI. By viewing what is taking place today with the appointment of Honourable Dawn Smith as Attorney General reassures them with profound confidence that it is possible and achievable”, the Premier said.

Premier Fahie further stated that it was fitting that the Attorney General’s swearing in was held during United Kingdom’s Black History Month. He also explained what the appointment of a local Attorney General means to the ancestors of the Virgin Islands.

“We are getting to the destination where our ancestors started the journey and died with the hope that their future generations would get there one day once we remained in prayer, trusting in God for His wisdom, knowledge and understanding protection and guidance. This means that we are getting there, step by step,” Premier said.

The Premier mentioned other indigenous Virgin Islanders that hold senior post in the Government and Public Service including the Deputy Governor, Premier, Leader of the Opposition, female members of Government, the newly appointed Attorney General, Speaker of the House of Assembly, Clerk of the House of Assembly, the first local Attorney General and Financial Secretary.

Additionally, Premier Fahie outlined other posts he wishes to see held by Virgin Islanders including the Commissioner of Police, Superintendent of Her Majesty’s Prison, and Governor.

Hon. Smith was sworn in to the House of Assembly during a Special Sitting on Thursday, October 1. She succeeds Mr. Baba Aziz who served in the post from 2010 to 2011 and again from 2015 to this year.

Hon. Smith is the second local Attorney General of the Virgin Islands. R. Dancia Penn-Sallah, QC OBE first served in the post from 1992 to 1999.
#Andrew A. Fahie  #Fahie  #the Virgin Islands

John Doe 151 days ago
Rule of law Is a colonial term, that has nothing to do with democracy. It’s a term universities teach blessed poor students to obey, as form of being ok. Ok slaves and ok working class.

The term rule of law has been invented against slaves and second class citizens, by the people that wrote those laws, to protect their own interest, not the people’s human rights.

Democracy is about the rule of justice, above any law. Wake up, Fahie. Do not let spit on you and call it rain.

Dawn is wonderful, honest and professional. No question about it at all.

But Rule of Law is to maintain bureaucracy, not democracy. To protect the masters, not the people.

Or in another words: once you supported justice (reparation) they will work out with your opposition to replace you, this way or another.

The Rule of Law has the ultimate power to invent wrong doing out of nothing, making elephants from mosquitos, and ignoring their friendly elephants in the room.

It will be used against against any leader who will try to get paid for building UK’s fortune with black blood, tears and slavery.

Therefore Governor Jasper does nothing wrong by reminding you guys that he has the ultimate power to use the army against your democratic will. He is there to protect your masters, not you. Reminder: you are not a citizen of your island, but a subjects of your masters.

The rule of law will always support the traitors and snitches among you that cooperate with your masters against your people. “In the name of law”, of course.

Slavery was once rule of law, just as Nazism was, remember that before giving up your democracy for bureaucracy.

The only reason the masters are higher is because the slaves got down on their knees. Stand up or keep crawling. Both ok as a choice, but not together.
View all comments (1)Add comment