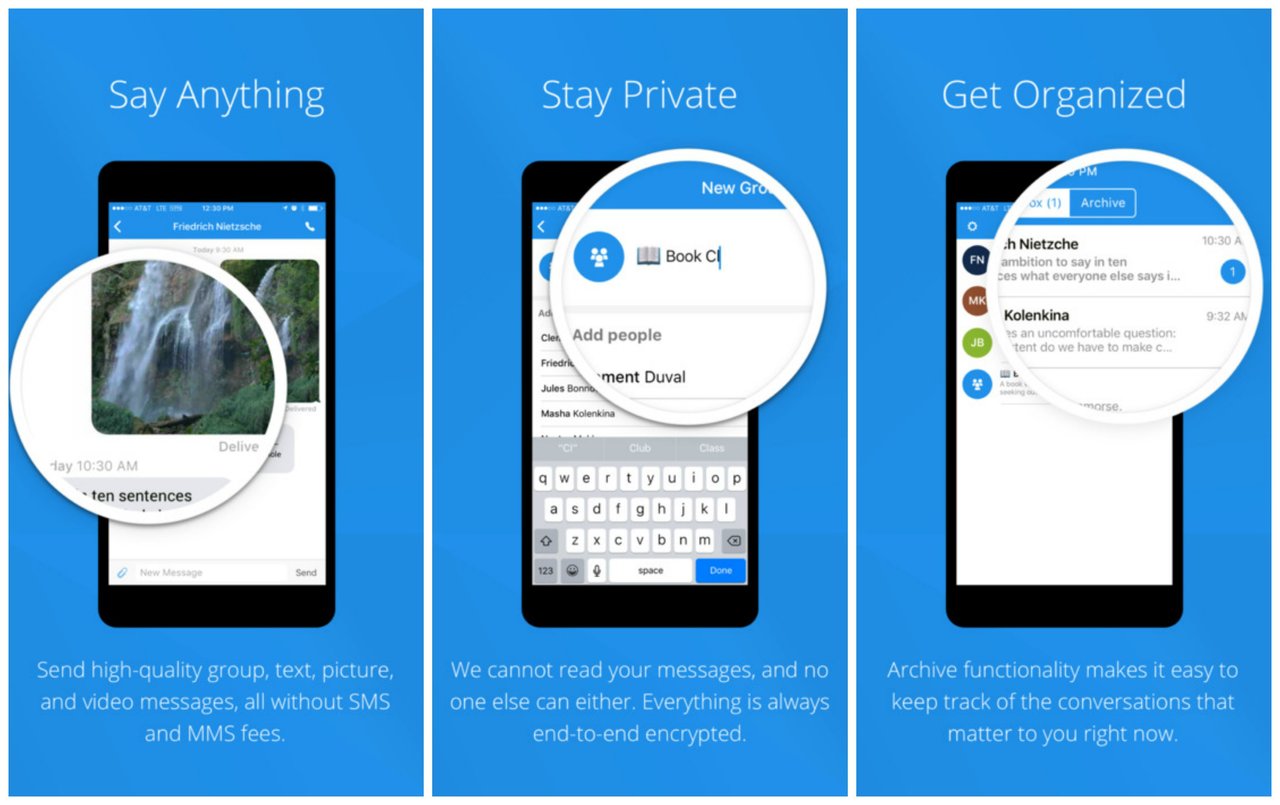 If you value your privacy, switch to Signal as your messaging app now

No, it isn’t just for spies and whistle-blowers.

It’s hard to remember what life was like before modern messaging apps came onto the scene a little over a decade ago. Since their rise alongside the smartphone, they’ve quickly become a primary way people communicate with friends and family. It’s no surprise that such apps usually hold the crown of the most popular apps on Apple’s App Store and the Google Play store.

And messaging apps are big business. The world’s top two messaging apps have over a quarter of the people on the planet using them. WhatsApp has 1.5 billion users worldwide, and Facebook Messenger comes in a close second at 1.3 billion users worldwide, reports Inc. Both of those apps are owned by Facebook. But there are other insanely popular messaging apps used by hundreds of millions or even billions of people on a daily basis, with regional favorites such as China’s WeChat, Korea’s Viber, and Japan’s Line.

The thing about these lists of top messaging apps is that there’s always one notable absence: Signal is never on them. And that’s a shame, because Signal is the most secure, privacy-centric messaging app ever made. If you haven’t given it a try yet, you should. Here’s why:

Time and time again it’s been shown that it’s dangerous to trust Facebook with our data. Yet, well over a billion people choose to send their most intimate messages over apps made by the company. And while Facebook says it can’t access messages sent over WhatsApp and doesn’t have access to messages sent via Facebook Messenger, the company does mine your usage of those apps for other data, like how often you talk to someone and whose phone numbers you have stored in your smartphone’s address book.

Facebook doesn’t allow outside privacy and security researchers to inspect its data collection processes, nor the code of its messaging apps. That means we just need to take the company at its word that it’s being responsible with our communications. And studies show that many people are unwilling to make that leap of faith.

So why jump ship from Facebook Messenger and WhatsApp to Signal and not some other messaging platform? Because Signal is the only major messenger that runs on multiple platforms (iOS, Android, desktop) and steers clear of tracking you and your connections to other people. All the other cross-platform apps track you. And while Apple’s Messages doesn’t, it’s only available on iOS and MacOS devices. Android and Windows users are out of luck.

As you may have heard, Edward Snowden uses Signal. That fact alone usually makes people realize just how secure the app is. All messages are end-to-end encrypted. “But so what?” you might say. Other messaging apps use encryption.

I use Signal every day. #notesforFBI (Spoiler: they already know) https://t.co/KNy0xppsN0

And you’re right: some do. But others don’t. The major messaging apps that use encryption are Apple’s Messages and Facebook’s WhatsApp (which is built on Signal’s encryption, though Facebook mines other metadata about its users). However, Facebook Messenger does not encrypt its messages by default, nor do messaging apps made by Google, such as its Hangouts app.

But Signal does more than just encrypt your messages. It also hides virtually all of the metadata, including who sent the message. That means only the person who the message is being sent to can see who sent it to them. Signal has no way of telling who is sending you other Signal messages, nor does anyone else who intercepts a Signal message in transit. This is pretty much the most security you could ask for in a messaging app. And only Signal offers it.

And yeah, most of us aren’t and never will be spies or whistle-blowers. But that doesn’t mean we shouldn’t be using the most secure messaging app possible. Even the U.S. Senate urges members and their aides to use Signal. Given that we live in an age where tech giants and data firms have built an entire industry off of mining our data, most of the time without our knowledge and with little regard to the security of that data, why wouldn’t we want to keep our most private, personal, and sensitive communications from them?

Signal is open-source and a nonprofit

But perhaps the best reason to use Signal is that it’s open-source software. This means that anyone in the world can take a peek at its code and verify that the app is as secure as its makers claim. No other major messaging apps would ever dream of allowing that.

Speaking of Signal’s maker: the app is now maintained and developed by the Signal Foundation, a 501(c)(3) nonprofit organization that was cofounded by Brian Acton, the cofounder of WhatsApp. Acton has always been an outspoken advocate of user privacy and is rumored to have left Facebook in September 2017 due to extreme disagreements with Mark Zuckerberg about the future direction of WhatsApp. Five months later, Action cofounded the Signal Foundation with Moxie Marlinspike.

The foundation was created to fund the further development of Signal, which had been maintained by Open Whisper Systems until that point. With the Signal Foundation’s founding, Acton gave the nonprofit $50 million to continue to develop Signal, which had struggled with financing for years. As Acton wrote in a blog post at the time:

As more and more of our lives happen online, data protection and privacy are critical. This isn’t just important for select people in select countries. It’s important for people from all walks of life in every part of the world. Everyone deserves to be protected. We created the Signal Foundation in response to this global need. Our plan is to pioneer a new model of technology nonprofit focused on privacy and data protection for everyone, everywhere.

Moxie and I share a belief that the best way to continue to ensure the universal availability of high-security and low-cost communications services like Signal is to do so through a foundation structure that is free of the inherent limitations of a for-profit company. Ultimately, our goal is to make the Signal Foundation financially self-sustaining. We believe there is an opportunity to act in the public interest and make a meaningful contribution to society by building sustainable technology that respects users and does not rely on the commoditization of personal data. Signal has always been a collaborative project with a strong community, and we will continue to learn from our users and experiment together.

Unlike other encrypted messaging apps, Signal has no financial motivations. The company is a nonprofit run by privacy advocates who believe that online data shouldn’t just be kept safe from hackers but from the companies who want to profit from it.

All this being said, there is one drawback to Signal. Since it never makes the lists of the most popular messaging apps, many of your friends and family members probably aren’t using the app. And a messaging app is only useful if the people in your life are using it, too. So if you like the privacy Signal provides, it’s up to you to help spread the word.

So why not make today the day you download Signal and start taking back just a little more of your privacy from the corporate interests that now control your messages?