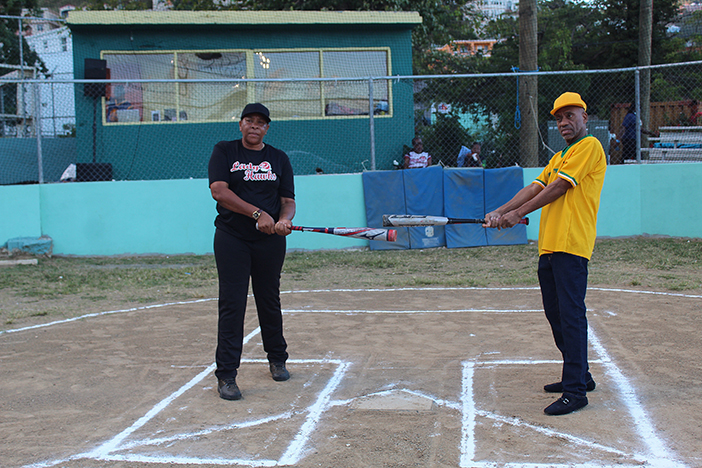 Power Outage and That’s Ya Problem, finally began their BVI Softball Association league title defense on Saturday, three years and five months after Hurricane Irma destroyed the territory, including severe damage to the E. Walwyn Brewley Softball Park.
The Astros-Atoms League that honored the Blue Wings’ Rufus “Sleepy” Malone and Gertrude Thomas of the Crushers, began with a parade of teams from UP’s Cinemax to the E. Walwyn Brewley Softball Park for the opening ceremonies. The league was delayed from a March 21, 2020 start and another attempt, because of the Covid-19 pandemic.

Players were able to prepare for the league in the George “Shawala” Borrows Memorial Tournament that ended in December, in honor of the slugger who played his last game in the BVI Softball Association preseason tournament with Storm on August 16, before a Covid-19 pandemic break, then was gunned down in his home on Sept 2.

That’s Ya Problem began their title defense with a 13-6 victory over the West End Warriors. Che’Vaunne Richardson was credited with the victory and Daphne Blyden-Smith took the loss. That’s Ya Problem’s Kaynesha Stoutt was 2-for-4, scored twice and had a run batted in. Brianna Brewley scored three times on a 1-for-4 day and had an RBI. Kiara Woodley finished 2-for-3 with a run batted in.

The West End Warriors’ Denesha Penn went 1-for-3 and finished with 2 RBI’s. Tashima Hill doubled twice in three trips to the plate.

Jamal “Lefty” Allen who assists as That’s Ya Problem’s Coach told Island Sun Sports that they’re a team you can’t linger with, but they still have a lot of work to do.

“The only issue I had with them is not waiting on the slow balls being pitched,” he said. “With that slow ball, they don’t wait on it and we all know the result. We also had some errors, but most of the players fought and we came out on top.”

Then he went in the men’s game and Allen fired a 2-hitter and Power Outage crushed the Pirates, 12-2. Rico Penn suffered the loss. Jamalie James tripled in three at bats, scored once and had 2 runs batted in.

“Clearly our team came out and dominated, we put up runs when we needed to, because the games are now being played for seven innings or an hour and a half, whichever comes first,” Allen explained. ”So the best thing to do is play defense, make sure your team bats behind you and that’s what we came out and we did and we were successful.”

On Sunday, Thea Cooke allowed 2 hits in Synergy’s 12-4 victory over the Lady Hawks in a game that was played under protest by the losers. Riiah Durante took the loss. Marissa Malone was 1-for-3 with a triple and 3 runs batted in, for Synergy. Lady Hawks’ Celine Thomas also tripled in two at bats and drove in two.

Renold “Bushman” Corum gave up 11 hits but the Los Macarrecios fended off Storm’s charge, 9-6, as he got the victory. Aubrey “Kong” Frett was the losing hurler. No other statistics from the game was provided.

“To be honest, a lot of us couldn’t wait for this day to come, even the fans,” Allen noted of the first post Hurricane Irma league. “Even fans were asking when it was going to start and for my teams’ that won the 2017 championships, it’s good to start off with a victory and this is tremendous for us.”

There were a series of lead up games after Covid-19 breaks followed by the George “Shawala” Borrows Memorial Tournament and Allen said the games helped to keep them in shape for their title defense.

“We all know the struggle here in the BVI is practice,” he said. “At least we were able to gel as a team, see live pitches and it really helped us a lot. Even though it was a tournament, most of us took it seriously and did what we had to do and talent shows.”
#COVID-19  #Covid
Add Comment