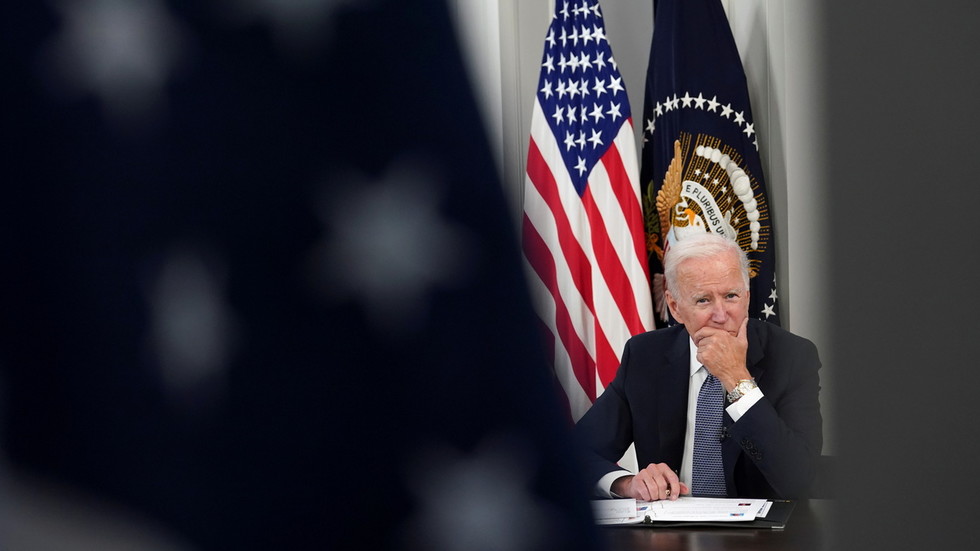 Despite all the severe sanctions that were supposed to boost US industry, imports from China are up and the economy’s in trouble

Despite all the early optimism of a post-Covid economic revival, soaring inflation stoked by the government’s multi-billion-dollar stimulus schemes is threatening to ruin Joe Biden’s dreams less than a year since he took office.
At the beginning of this year, the mainstream media was blasting rays of optimism over America’s Covid-19 economic recovery, which, owing to the combination of a successful vaccine rollout, huge injections of government money and a sheer disregard for human life, allowed the US to roar back in recovery.

Hal Brands, who authored an article the other week claiming that China’s rise was “over,” in April proclaimed “America’s Come-From-Behind Pandemic Victory” and stated the US was “the true winner.” Still technically on course for economic growth of just under 6% for the year of 2021 (following a -3.5% retraction in the previous year), it didn’t seem unrealistic at first glance that such optimism was displaced.

Yet by October, the bright lights of hope have faded into a murky grey of misery. The emerging post-Covid-19 world and economy isn’t like the old one. Surging commodity and energy prices have caused chaos the world over, squeezing supply chains and coinciding with a tidal wave of inflation which doesn’t seem to be slowing down. It’s hitting hard in the US, where inflation rose to a 13-year high of an annually adjusted 5.4%. The US Federal Reserve has insisted this phenomenon is “transitionary” – ignoring the bulk of evidence that it clearly isn’t. Already around the world, certain countries are now pushing up interest rates to try to cool down the flow of credit, leading to GDP projections coming down.

However, the bigger elephant in the room is that these price rises are the product of America’s own self-defeating and ill-calculated economic policies, namely ploughing trillions into the economy to force it to restart, leading to a spree of uneven consumption. It’s also been hit by the effects from the imposition of strident tariffs on imports from China, imposed during the Donald Trump era but maintained by President Biden.

Despite being hailed as measures that would boost US industry and hurt China’s, they have not served to shift manufacturing whatsoever and have instead translated into steep price rises, as China remained the only supply chain capable of riding out the storm. The result is now a vicious cycle of inflationary pressure, or better termed “stagflation,” which amounts to an early setback for Biden’s economic policy, which is still peppered with the obsession of “America First.”

Recent export data shows that despite its well-reported power crisis, China’s exports boomed in September and its trade surplus over the US jumped 12% to $28.1 billion in August.

Such an outcome is deeply ironic, not least because it remains the aim of US trade policy to not only try to contain China’s economic growth but to bring manufacturing “home.”

It hasn’t worked, primarily because no other country besides China has got the industrial and logistical capacity to meet global demand, coupled with political stability and certainty stemming from its handling of Covid-19. In America, both Trump and Biden pursued stimulus bills and mega investments into the US economy, producing an earthquake of unprecedented demand which breezed over their sacred tariffs, and causing ricocheting price rises throughout the entire supply chain.

It’s become a vicious cycle. Commodity, energy and price costs have all surged, leading to China’s Producer Price Index soaring to an all-time high, which will then be exported in the form of rising prices for goods throughout the entire world.

The US is importing more and more from China, not less, simply because it has no feasible alternative to handle the demand of an economy that’s been on stimulus “steroids.” Yet now, as we are seeing with GDP projections, it has got to the point where inflation has begun to wear down growth because it naturally suppresses consumption, as wages tend not to keep up with businesses prioritizing their profit margins. US GDP was constantly forecast to reach 7% at the start of this year, Fortune even produced a ridiculous article claiming it would overtake China’s percentage rise, but now it has slipped to under 6% as the post-Covid “stagflation” takes root.

What are Biden’s options? The most obvious one to offset inflation would be to cancel the counterproductive, self-defeating and useless Trump tariffs, but as explained previously: he can’t do that because that is politically toxic; these tariffs are a quasi-religious, sacred white elephant. Protectionism, “China bad” and “American jobs first” are the new normal. But if this kind of inflation is what is happening now, imagine what it would be like if the US hypothetically doubled down on manufacturing at home? The US has, as it is, attempted to force through a nationalistic economic strategy in a globalized modern world, and it is threatening to make the wheels fall off the train.

On that note, it is ironic that the mainstream media is relentlessly reporting a “crisis” in China over its electricity shortages, yet fails to see what has caused this in context and how this problem is interlocking. There’s one root problem: A US economic strategy over the past few years that has been premised on eye-watering contradictions, the mixing of trade protectionism with a money supply on steroids overdose.