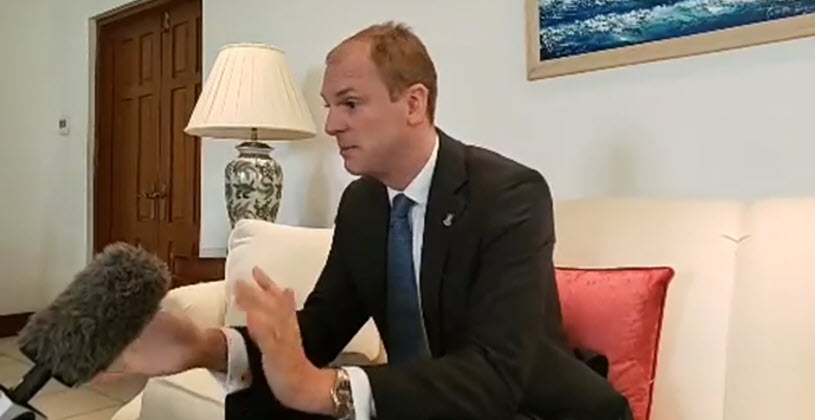 In the face of international concerns for free speech, Governor Augustus Jaspert yesterday assented to Computer Misuse and Cybercrime (Amendment) Act, 2019, bringing the amendments into effect.

Following the passage of the Act, the Governor had withheld his sigature as there were concerns that the Act would interfere with freedom of expression and the media.

In a statement on his decision to proceed with the signing of the legislation, the Governor explained that he considered the provisions in the amended Act very carefully. He said that many of these amendments are positive steps and are needed to deter nefarious online behaviour such as cyberbullying, to prevent and identity theft and fraud, and to protect children and vulnerable people.

However, he noted that concerns have also been expressed to me by local and regional members of the media, particularly in relation to freedom of expression. Their concerns relate to certain provisions in the amended Act that they believe may threaten the principle and guarantee of free expression and press freedom and that the citizens of any democracy have a fundamental right to debate the public figures and policies that affect their lives.

"My view is that freedom of expression can, and should, include the right to appropriately say things that others may not want to hear. Social media and online platforms are necessary in a democracy for discussion, exchange of information and opinions. I have been assured that those provisions in the amended Act that have attracted criticism should not, and will not, be seen as free rein for prosecuting content which is consistent with guarantees of freedom of expression in a democratic society," the Governor stated.

He explained that in order to ensure that the importance of freedom of speech for citizens and journalistic comment is protected, he has recommended to the Director of Public Prosecutions consider the drafting of guidelines that would help to ensure that the offences created under the Computer Misuse and Crime Act as amended can be prosecuted fairly and effectively without compromising freedom of speech guaranteed by the Virgin Islands Constitution Order 2007, particularly protection for those commenting online and for journalistic reporting.

It is unique that the Governor would take such an approach as there were no timelines given for the drafting of the guidelines and which were not included as part of the Act.


The International Press Institute said that it looked at the legislation and became concerned about two clauses in particular; which it was explained can also affect freedom of expression.

“After reviewing the documents, IPI had raised concerns over two worrying clauses in the law which could have potentially harmful effects on press freedom and freedom of expression, while also leaving the small Caribbean archipelago out of step with its neighbours.

Further IPI Director of Advocacy Ravi R. Prasad said, “If given final assent, these proposed amendments would send a shiver down the spines of journalists working in the British Virgin Islands”.

He further noted that legislation similar to these are being used to take action against the press in many countries.

“Governments around the world are currently using these kinds of insult and cybercrime laws to prosecute reporters and silence independent media. If the BVI leaves this possibility open to current or future administrations, it has the potential to create a chilling effect on the territory’s journalists,” Prasad added.

The first area of concern for the IPI is Section 14A of the Bill which stipulates that it is a criminal offence to send any electronic message that is “grossly offensive or has menacing character” or that is sent “for the purpose of causing annoyance or inconvenience”. According to the international organization this part of the Bill can used to target members of the media.

“The bill’s vague wording and broad scope means it would be open to misinterpretation and exploitation by government officials or powerful businessmen seeking to target journalists or commentators because of critical coverage. There is also concern about disproportionately harsh punishments included in the bill,” the article said.

The organization had expressed concerns about Section 14B of the legislation which criminalizes the use of a computer to defame another person. It was noted that this offence has penalties up to three years in prison and a $100,000 fine.

In relations to this IPI said, “The amendment effectively extends the country’s existing criminal code on defamation to the digital sphere. While criminal libel exists in the BVI, the law is very rarely enforced.”