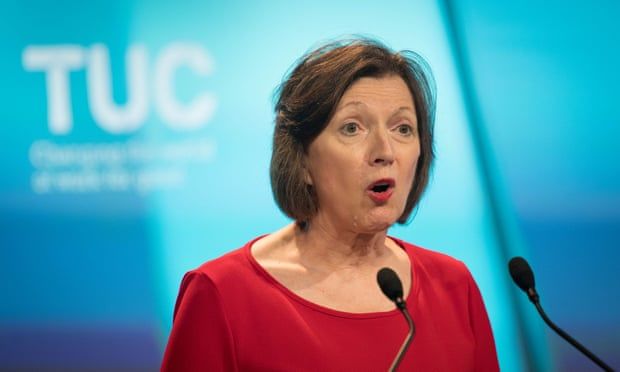 General secretaries representing 5 million workers urge the government to reject findings of the Tony Sewell commission
Trade union leaders have written to the prime minister, calling on him to reject the “insulting” report published by the Commission on Race and Ethnic Disparities.

In a letter seen by the Observer, 33 trade union general secretaries representing more than 5 million workers have urged the government to “pick a different path”, noting that “there is no conflict between defending working-class interests and pushing for equality for BME [black and minority ethnic] workers. Today’s working class is multi-ethnic and multi-faith.”

The controversial report by Tony Sewell, chair of the commission, published last month, has drawn widespread criticism from experts and organisations across the public and private sectors for its incoherence, poor scholarship and for playing down the extent and impact of structural racism in the UK. The Labour opposition has accused the government of sowing division.

In an open letter, unions have told Boris Johnson that they did “not consider that the report’s recommendations would make a meaningful positive difference to the working lives and careers of BME workers”, and urged ministers to act on the findings of previous reports.

The letter stated: “We hoped that the report would recommend action to stamp out insecure work and make employers act to close their ethnicity pay gaps.” It noted that, in London, the disparity in pay between white workers and ethnic minority workers stood at 24%.

“Instead, the commission has chosen to deny the experiences of BME workers and be complacent about the UK’s progress towards being an antiracist society. The UK’s trade union movement repudiates this report.”

Frances O’Grady, general secretary of the TUC, said: “No matter what your race, ethnicity or background, we all deserve fair treatment for the effort we put in at work. And we all deserve decent pay, a chance to get on in life, and dignity in how we are treated. But black and minority ethnic workers are still paid less than white workers, on average. Too many of these workers are concentrated in low-paid, insecure work.

“The commission denied the experience of black and minority ethnic workers. The prime minister must not make the same mistake. The government must reject this divisive report.”

Labour’s shadow business secretary, Marsha de Cordova, told the Observer that she is pressing for more urgent debate in the Commons. “This report has unravelled. It is clear it has neither credibility nor coherence. Academics, historians, medical professionals and civil society organisations have all agreed the commission cherry-picked and misrepresented evidence to reflect a preordained ideological point. If it is true that No 10 intervened in the writing of the report, there are serious questions to be asked about its independence.”

Following allegations that officials in Downing Street rewrote the final Sewell report, a coalition of black professionals have also written to the prime minister. Blaksox, led by educational consultant Patricia Lamour, is calling for an independent investigation to assess whether the ministerial and civil service codes have been breached, and are lobbying Yvette Cooper, chair of the home affairs select committee, to investigate.

“Black, Asian and ethnic minority communities’ levels of trust and confidence in government is at its lowest level ever recorded, according to the most recent British Social Attitudes Survey, published in October 2020,” stated the letter. “We hope you will recognise the extremely serious nature and import of these allegations and take the necessary urgent and appropriate action to rebuild trust and confidence.”
#Boris Johnson
Add Comment