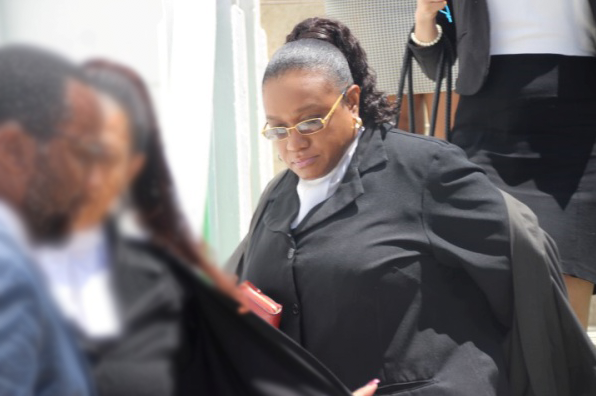 Director of Public Prosecutions (DPP), Tiffany Scatliffe-Esprit said judges and magistrates in the BVI lack critical security support needed for them to feel safe. The DPP said this is in addition to the urgent need for security for herself and prosecutors on her staff as well.

The DPP made the claims in her position statement on matters of governance submitted to the ongoing Commission of Inquiry (COI).

She also said security at actual courthouses in the BVI is unacceptable.

“The magistrates need security. The magistrates need orderlies. They don’t’ have orderlies at the moment. They need orderlies. We need proper security, especially at the courtroom at John’s Hole. There needs to be more security especially when you have dangerous prisoners coming in or being used. They need to be there so that if anything happens, the Magistrate is safe, those of us that are there are using the court are and feel safe.”

She said while there is often security to guard the jury, sometimes more manpower is needed, especially in instances where there are high profile or dangerous accused prisoners.

Insufficient funding for salary and training

Scatliffe Esprit said since 2017, she and along with previous DDP’s have appeared before the House of Assembly’s Standing Finance Committee and communicated the needs of the office.

“We need bigger salaries, we need to be able to get security, we need a more secure accommodation for the offices and I’ve always been told – ‘Yes, we will do it.’ – but then nothing.” Scatliffe-Esprit told the COI.

In her statement, she also complained that her office, along with the Magistrate’s Court and Eastern Caribbean Supreme Court in the territory, is grossly understaffed and under-resourced.

Another big problem, the DPP noted, is that there is not sufficient money for training her team. Funding for this is usually cut from the budget, she said.

“When it comes to funding, the police get funding, the courts get funding, and you forget the middleman. The police cannot take anything to court. It has to come through the DPP. For the DPP to do its job, we need proper funding. We need equipment, we need staff, we need administrative support – and those things are lacking,” the DPP said.

And in examining certain reports placed before the House of Assembly, the DPP said it is clear there is not a proper appreciation and respect for the DPP’s Office.

Security and Justice should be under the Governor

According to the DPP, all law enforcement agencies, the prisons, and the court system should be under the remit of the governor.

She said this is because the governor’s role is security and his office has the necessary expertise to assess and guide the departments to ensure they are properly funded and achieve the necessary capacity concerning human resource provisions.

She said having all the security and justice-related bodies under one umbrella would also allow for the removal of any aura of political influence and would ensure necessary funding is received by the departments. It would also eliminate the issues related to information sharing, the DPP stated.