Dr Pickering ‘not an option for NDP @ the moment’- Hon Marlon A. Penn

With seasoned politician Dr Kedrick D. Pickering not stating who he will be running with at the 2023 General Elections of the Virgin Islands, there have been many speculations as to who he will be affiliated to.

One thing is for sure, Dr Pickering- the former Deputy Premier and Minister for Natural Resources, Labour and Immigration- will not be part of the National Democratic Party (NDP) ticket.

This was disclosed by Opposition Leader and NDP Member Hon Marlon A. Penn (R8), during the Morning Braff Show on Tola VI Radio today, April 7, 2022.

Dr Pickering not in the NDP mix

Host of the show Floyd Burnett aka Heritage asked Hon Penn whether he would entertain Dr Pickering returning to the party.

Hon Penn said the NDP has a transparent process to come up with their candidates and that process will commence soon; however, Dr Pickering is not involved in that process at this time.

“At this time there are two or three persons who have indicated in our circle that they want to run for that district and when the vote comes up the party will decide on that,” Hon Penn said, suggesting also that he already has someone in mind who he will be voting for.

‘Dr Pickering is not an option’- Hon Penn

Guest host Rosemary C. Rosan then asked Hon Penn whether he would be willing to bring back Dr Pickering into the NDP fold to contest the Seventh District seat.

During his official announcement as a candidate in the 2023 elections at The Stickett in Long Look last night, April 6, 2022, Dr Pickering said he was willing to put differences and egos aside to work with colleagues that he worked with before or other colleagues, “to act in a manner of reconciliation.”

Some had interpreted that as Dr Pickering being open to returning to the NDP, the party he helped founded. 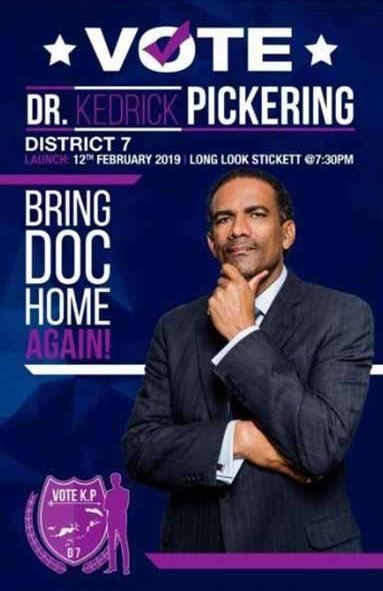