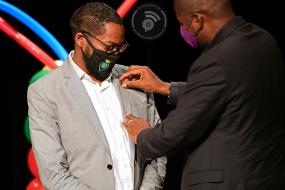 Dr. Richard Georges is the Literary and Cultural Ambassador responsible for promoting the understanding of and appreciation for Virgin Islands history and cultural heritage through poetry.

Dr. Georges is the first to hold such a prestigious title in the Virgin Islands and will do so for a period of three years.

Dr. Georges, in acknowledging the recognition and achievement, said that the arts is important to the development of the Territory.

“While this is a great personal milestone, I believe what is more important is what it portents for the undreamt future.”

He thanked his former literary teachers for the ‘foundation’ he received and his supporters in the community and abroad for his success.

During tenure, Dr. Georges is expected to carry out the following responsibilities:

* Act as a cultural ambassador for the Territory, promoting the understanding of and appreciation for Virgin Islands history and cultural heritage through poetry

* Present an annual lecture and reading of his poetry (optional)

* Give a reading or presentation to inaugurate and close his term

* Make suggestions for the improvement of existing literary programmes and projects

Literary Arts Officer in the Department of Culture, Ms. Anika M. Christopher explained that the designation of a National Poet Laureate has become a country’s way to express its love and appreciation for the art of poetry. She said the Poet Laureate of the Virgin Islands is selected from among the Territory’s most accomplished poets.

Ms. Christopher added, “The criteria for the poet’s nomination and appointment are based on the subject matter of their written work, which should speak to the unique experiences of the Virgin Islands. This can range from societal issues to our cultural heritage and history. The volume/quantity of their work as well as the quality should be evidenced through awards and other literary achievements.”