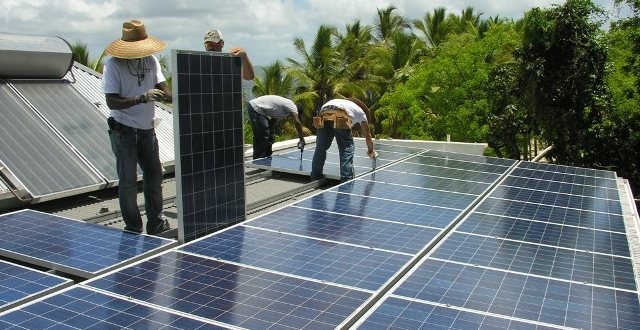 Premier and Minister of Finance, Hon. Andrew Fahie said Government is pressing ahead with its plans to reduce the Territory's dependency of fossil fuel which is seeing millions leave the territory to enrich other countries.

"To ensure that this is done properly and in a timely manner, we will be, in short order, soliciting the services of an energy expert to work between the Premiers Office and the BVIEC [BVI Electricity Corporation] Board so that our Green energy transformation is a success," Premier Fahie indicated.

In a statement ahead of the Virgin Islands Party's first year in office, the Premier outlined the Government's plans for the energy sector.

Currently, all fossil fuel consumed in the BVI is imported from other countries and according to the Premier, the average base cost of fossil fuel over the past five years is $2.18 per gallon.

"I am advised that the average consumption of fossil fuel in the BVI is presently 1 million gallons per month. Therefore, the BVI consumes $2.18 million in fossil fuel per month at base cost. That is $26.16 million per year, and $130.8 million over five years, that is leaving our shores to enrich other countries and other economies. Put another way, the BVI people and our economy loses $26.16 million every year by importing fossil fuel," Premier Fahie outlined.

He added, that as our economy grows, the Territory's fuel consumption will grow even further beyond the 1 million gallons per month, and this means even more money will be leaving our shores.

"Green energy is free. Thus, by reducing our fossil fuel consumption by 60 percent, we can reduce this leakage by about $15.7 million per year, based on the current usage and prices. That would be savings for the people of the Virgin Islands of $78.5 million dollars over the next five years," the Premier explained.

He shared that Compressed Natural Gas (CNG) and LPG are cleaner and cheaper fuels. Therefore, there will be even further savings and benefits for the BVI people when we switch to CNG and LPG for the remaining 40 percent of our fuel needs.

"This is money that can remain in the pockets of Virgin Islanders or money which you, the people, can spend on other things such as improving your homes and properties, buying food or educating and caring for your children, or you can put that into your savings. That is money that can strengthen the BVI’s economy instead of some other country’s economy," Premier Fahie shared.

The Premier disclosed that Government intends to get to 60 percent Green by 2030 or before. He said that a series of public awareness meetings are planned for March to educate the population on how they can participate in the Green economy and how they can go about accessing the benefits and incentives of our Green initiatives.

To the business community and investors, Premier Fahie said that the Government is open to receiving unsolicited proposals to create partnerships that will assist the Government in achieving our vision to the benefit of all.

He disclosed that within the first month of your Government’s tenure, the BVI Electricity Corporation (BVIEC) was mandated to take a leading role in driving the Territory’s transition to Green energy sources.

The Government has already implemented initiatives, including zero tax on the import of clean energy systems such as solar and wind power generation equipment, hybrid vehicles and conversion of vehicles to Liquified Propane Gas (LPG), for a period of one year.

"I announced that there would be a comprehensive mechanism for private citizens who generate their own electricity to earn revenue by selling power back to the national grid. By the end of 2020, instead of you paying BVIEC for electricity, it can be the other way around if you Go Green. This is how your young, new Government has been working for you," Premier Fahie stated.

According to Premier Fahie, Government is on the way to making Anegada the first island in the Virgin Islands to generate its own electricity. BVIEC is rolling out a project to create a microgrid powered by solar energy using solar photovoltaic (PV) technology and battery storage.

Last November, a solar power system was installed in the Youth Empowerment Project (YEP) building in East End through a partnership involving BVIEC and a BVI-based renewable energy company, aTec. Premier Fahie indicated that this is a grid-tied system and is helping BVIEC to develop the policies, systems and regulations for our transformation of the energy sector including the introduction of net-billing for customers to sell excess power to the grid.

In order to prepare for jobs in the new Green energy industry, Premier Fahie reminded that Government has successfully sealed a partnership involving the Premier’s Office BVIEC, Power52 and the H Lavity Stoutt Community College (HLSCC) to train youth from across all nine Districts in the installation of renewable energy systems.