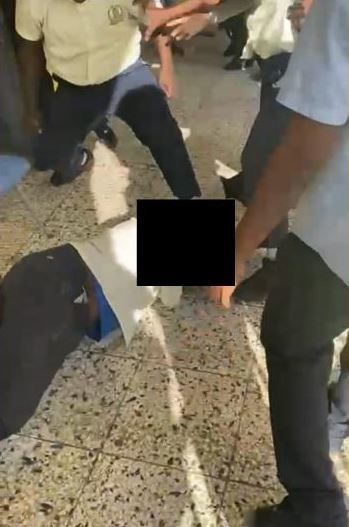 In a disturbing video that has been circulating on social media, at least three male junior school students of Elmore Stoutt High School (ESHS) thrashed another male ESHS student in the full view of other students.

The fight reportedly took place on the corridor of the L. Adorothy Turnbull Building on May 6, 2022.

The 28-second clip shared with our newsroom shows at least three students physically assaulting another student.

The student being disadvantaged fell to the ground and is then left to block as the other students stomped and punched him, including to the face.

None of the students appeared to make an attempt to stop the fight; however, two adult males believed to be security personnel intervened.

Students boast about fight on video

In another video sent to our newsroom, two of the students who assaulted the lone student could be heard boasting about their actions.

The 30-second video clip also showed the bruised face of the student that was attacked.

It is unclear of the matter is engaging the attention of the police.

There are reports that all of the students involved were suspended.