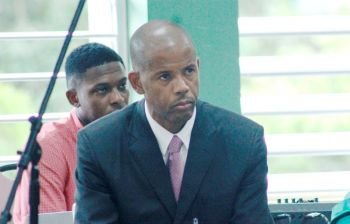 As residents continue to read the Auditor General Ms Sonia M. Webster’s damning report on the ‘Government‘s Financing of the BVI Airways’ Direct Flights to Miami’ project, more revelations are being unearthed.

The report shows that after an agreement, whereby Government had promised an investment of $7.0M and the Operator parties to put in their own $6.0 M, taxpayers were left holding the bag after over $7.2M was paid out and there were no flights, no plane, no information of the Operator parties’ $6.0M and no return of taxpayers $7.2M.

In her report, the Auditor General also showed how the former Financial Secretary (FS), Mr Neil M. Smith, allegedly facilitated this scam on the people of the Virgin Islands.

No letter of credit no deal?


The Operator parties had demanded a ‘Letter of Credit’ from the then National Democratic Party (NDP) Government headed by former Premier Dr D. Orlando Smith.

The government was unable to produce the Letter of Credit secured by taxpayers; therefore, the former FS Smith used that as a reason to dole out some $7.2M in less than one year, which was a violation of the payment schedule of three years.

In the Auditor General’s Report, on page 11 No. 45, she noted that Mr Smith stated it was difficult for the Dr Smith regime to secure a Letter of Credit because “stringent regulatory requirements in the banking industry that were resulting in large scale derisking …as a result obtaining a letter of credit would be possible but costly.”

Mr Smith, in his decision to violate Cabinet’s payment schedule, used this argument to dole out some $500,000 some 9 days ahead of the first payment schedule in January 2016, weeks after the Framework Agreement was agreed to by Cabinet.

If that was not enough, less than two months later, again in violation of Cabinet’s Framework Agreement Payment Schedule, Mr Smith paid out another $2.4M two months ahead of schedule.


The BVI Airways Operator parties seemed to have used public funds as their ‘piggy bank’ for the project and by October and November 2016, a full two years ahead, the former FS paid yet again two amounts totaling $2.1M, according to the report on page 11 No. 47.

By November of 2016, BVI Airways had collected $5.0M without a sign of an aircraft and no approval from US Department of Transportation or the local regulator Air Safety Support International (ASSI), according to the report on page 52 No. 55, which stated that these approvals lasted more than a “year and a half.”

The Framework Agreement, signed by both Government and the Operator parties, stipulated that the final $2.0M was to be paid only after the BVI-Miami air service was successfully launched as per page 11 No. 48 of the report.

If that was not enough, the Operator parties demanded, and it was agreed to by the Dr Smith Government, of a new and additional amount of money beyond the Cabinet approved $7.0M.

In the same addendum to the Framework, “an additional $200,000, allegedly to compensate the cost associated with the delays of the Government’s failure to produce the Letter of Credit was agreed to; however, contrary to the rules on Government spending the parties provided no supporting information or evidence to substantiate their claim for the additional funds,” according to page 12 No. 50 of the report.

After BVI Airways received the extra $200,000 wired out to them less than a month after the addendum to the Payment Schedule (no one has included the cost to taxpayers of the wire charges), the former FS Smith- as per the report on page 12 No. 53- “terminated the escrow arrangement and authorised release of the funds to the Operator parties on January 11, 2017, way before the new payment date and giving the Operator parties well over $7.2M before they even had approval from the UK and USA regulatory authorities to fly between Beef Island and Miami,” according to the Auditor General on page 12 No. 55.

The Auditor General, Ms Webster, concluded that Mr Smith did this without any binding financial commitment from the Operator parties or penalties for failing to provide financing, therefore the Operator parties relied almost exclusively on the money provided by the government, as stated on page 15 No. 75.

Conflict of Interest; no one looking out for taxpayers


The Auditor General raised some serious concerns about Mr Smith’s, the former FS, role in the BVI Airways project. She noted “the assignment of the Financial Secretary to facilitate the venture eliminated an important checklist that should exist between project execution and project financing. This created a conflict whereby the Financial Secretary’s obligation to ensure the successful launching of the project may have obscured his public duty as primary custodian of Government’s finances. The acute level of scrutiny that should have been applied to the financial and other issues of risk presented by the Operator parties was replaced with insistent action to accommodate their requests,” according to page 18 No. 98.

In another scathing rebuke of the former Financial Secretary’s role in the BVI Airways’ scandal, the Auditor General noted in her report on page 18 No. 99 that the project did not undergo the necessary financial scrutiny, “instead it was flawed by early payments without Cabinet authorisation."