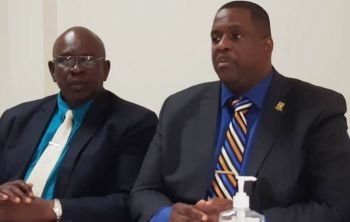 Administration comes in for high praises from Opposition Member

Even as Opposition Leader, Hon Marlon A. Penn had moved to criticise some of the bold steps taken by the Fahie administration to combat COVID-19, Fourth District Representative, Hon Mark H. Vanterpool has praised the government for taking the necessary proactive measures to keep the Territory safe.

"I think the Government has done a herculean job in this COVID crisis, to keep what could have been some major negative effects on the country, had they not taken the steps that they took... uncomfortable steps most of the time, but necessary steps and I commend the Premier for his hard work at it," Hon Vanterpool said.

Hon Vanterpool was at the time speaking at today's June 23, 2020, Sitting of the House of Assembly (HoA) where both Premier Andrew A. Fahie and Minister for Health and Social Development, Hon Carvin Malone were commended for their efforts so far in protecting the Territory.

He said the Health Minister, in particular, had dedicated long hours in trying to deal with the matter. "I told him I don't covet him."

Hon Vanterpool continued: "I want to commend them for what they have done so far. They were in uncomfortable situations at times... and not everybody is going to agree on everything they have done... but overall, Mr Speaker, I want to make it known that I think where we are from a health perspective [is] because of the hard and ardent work of the government," Hon Vanterpool said.

The Fourth District Representative commented that the current state of things in the Territory is one of a battle where regardless of what you do, whether it's good or bad, people will always have something negative to say about it.

"And it's so easy to say it nowadays, because you can hide behind the curtain and say it, behind the blogs, in the social media and you can say it there and not confront the truth in front of you," he said.

He called for the community and even HoA legislators to find positive things to say or do, that can catapult the country forward.

"I commend a lot of things that the government is doing, I think it is my job to support them when they do it," Hon Vanterpool said in calling on the other Opposition Members to step back and see the good in the government and not criticise for criticism's sake.

He also called on the Virgin Islands Party (VIP) government to be open-minded to Opposition criticism and feedback. "It's a criticism to make sure that we hold your feet to the fire [and] do the right things for this country," Hon Vanterpool said.

The Territory is currently COVID-19 free and is reopening in a phased manner following a total shutdown of the economy, which included border shutdown and 24-hour curfews.
#COVID-19  #Covid
Add Comment