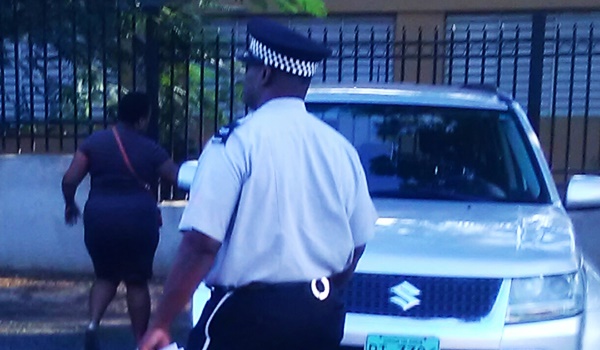 Lettsome-Joseph was handed her sentence when she appeared virtually before Magistrate Ayanna Baptiste-DaBreo on Monday, November 23.

The 35-year-old who is presently in quarantine after returning from the United Kingdom had pleaded guilty to stealing $44,500 from former police officer Earnest Gumbs and to operating a business without a trade license while she was a real estate agent in 2015.

In handing down the 12-month sentence, Magistrate Baptiste-Dabreo ruled that six of those months will be served at Her Majesty’s Prison at Balsam Ghut, while the other six will be suspended for one year.

This means she will only be made to serve the remaining six months sentence if she commits another crime within that one year.

For operating a business without a trade license, Lettsome-Joseph was fined $1,600 which must be paid by December 22, or she will have to serve an additional four months in prison.

Asked for mercy as conviction could ruin her career

In her final words to the court before sentencing, the aspiring attorney apologised to Gumbs, stating that she had already done so privately but wanted to give the former police officer a public apology.

She said she had always questioned her actions; adding that she should not have done the unlawful act since she was raised better.

In asking the court for mercy, she said the conviction would affect her potential career as an attorney as she was scheduled to complete her law degree in the United Kingdom in 2021.

Lettsome-Joseph who was represented by attorney Reynela Rawlins of PST Law was also charged with obtaining property by deception, forgery, and uttering forged documents.

However, these additional charges are all indictable matters that will be dealt with in the High Court.

How the money was stolen

Reports are that, back in 2015, Lettsome-Joseph presented herself as an agent of a firm called Perfection Realty. Gumbs, who was a police officer at the time, approached the offender because he wanted to sell a piece of land belonging to him at Johnson’s Ghut.

Based on an oral agreement between the two, the property was to be sold for $55,000.

On March 30 of the said year, the land was sold and the relevant documents signed with the land purchaser in the presence of a notary public.

On the following day, Lettsome-Joseph, in a letter bearing Perfection Realty letterhead, reportedly instructed CIBC First Caribbean Bank to prepare a cheque in her name, adding that she is the agent involved in the sale of the police officer’s property.

The court further heard that, on April 14 of the same year, Lettsome-Joseph received the funds for the property. It was deposited in her account at Banco Popular.

Up to about two months later, none of the money was transferred to the police officer who owned the land. The officer reported the matter to the Royal Virgin Islands Police Force.

His colleagues, hours after receiving the report on June 5, went in search of Lettsome-Joseph. She was apprehended and charged.