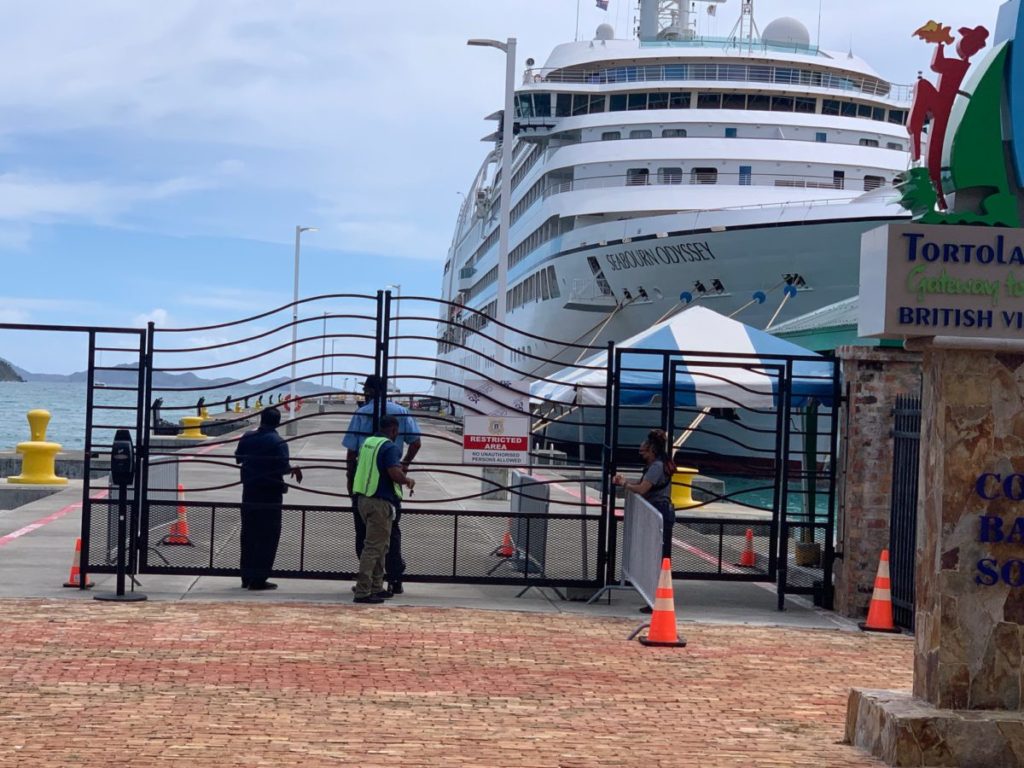 The breezy and cheery backdrop of the Cyril B Romney Tortola Pier Park was a stark contrast to the mood of the park’s business operators as well as Crafts Alive vendors at the end of day one of the opening of the cruise season.

The Seabourn Odyssey, a cruise ship under the Seabourn Cruise Line, was the first to dock at the pier in what is predicted to be a very busy cruise ship season.

However, business operators at the Pier Park and vendors at Crafts Alive Village were shocked when no cruise passengers stopped in their stores to peruse items on sale.

According to Xavier Javier, the operator of That’s Spirit store at the Pier Park, the reality of the first day was different from what he had expected.

“We tried to open as early as possible in order for us to get customers. But what we expected is not what happened. We saw the passengers get out and go in the area where the taxi was waiting there. We were expecting that they would at least come in the shops and see what they would like to get when they come back. But in the end, nothing happened,” Javier said after the ship’s call to the territory on Wednesday.

A worker inside a clothing store at the Pier Park said she believed the organisation for the reopening of the cruise season did not take into consideration the business people in the area. She said there were not many activities going on as tourists were moved directly from the cruise ship to taxis and transported to the beaches.

“The people here in the Pier Park don’t really benefit economically from the cruise ship today because no passengers have come into the store. This is a relatively small area and they could have at least made the passengers come look through if they wanted to before they go into town and to the beaches,” said the worker who spoke with our news centre on the condition of anonymity.

“After they’ve gone to the beaches and come back, they are tired and nobody wants to stop in the stores. They just want to go straight on to the ship,” she added.

Kunal Fatarpekar, owner of Klass Electronics, was one of the lucky shops that saw a few passengers come in and browse their collections. He said he understands visitors hesitancy to enter stores considering the pandemic is still ongoing.

However, Fatarpekar said his store is taking all precautions for when cruise ship customers eventually come. He said all his staff has been vaccinated.

Vendors at Crafts Alive Village reflected similar sentiments as those at the Pier Park. They said no tourists stopped by as they had hoped. Nonetheless, they are happy the cruise season is has commenced as it usually signals an increase in much-needed business for them.

One artisan said he wants the government to do what they must to ensure the return of the ships is safe. He said he was not vaccinated but he is taking all the required steps outlined by the government to protect himself and prospective buyers. He also said he was looking forward to seeing some returning customers who took pride in his art whenever they stopped by.

The Seabourn Odyssey docked approximately 7:30 am yesterday, October 13, with a little more than one hundred passengers on board. The cruise ship was one of those who operated in a bubble as Premier Andrew Fahie said some would.

The passengers were taken from the vessel to two approved locations at Cane Garden Bay Beach and Long Bay Beach in Beef Island. When the passengers returned to the Pier Park, they were told by attendants to go straight to the ship and they should not stop to shop, BVI News understands.