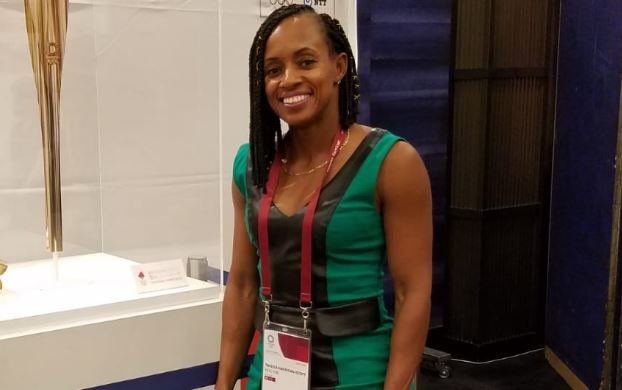 Retired local athlete Tahesia Harrigan-Scott has been placed in charge of the British Virgin Islands national team that will compete at next year’s Olympic Games in Tokyo, Japan.

Harrigan-Scott’s appointment came from the BVI Olympic Committee which said the decorated former national athlete has already started in her role by attending a three-day Chef de Mission seminar in the Asian country.

Harrigan-Scott described the seminar, which concluded on August 22, as being very informative and said the experience will be used to help execute her plans for the quadrennial sporting event.

She, however, noted one drawback.

“I was a bit disappointed not to be able to go into the Olympic stadium as the venue is still under construction. While some venues — like the field hockey venue — are completed, most of the others are in their test event phase so in terms of venue tours, it’s just seeing the progression of the stadiums and the different areas being developed,” said Harrigan-Scott who is also a former Olympian.

She also said BVI athletes will have to undergo a number of exercises to help them properly acclimatize to Japan’s conditions.

“The atmosphere in Tokyo is great, the environment is good with the only thing of concern to most people and the Tokyo 2020 organisers is the heat and humidity around the period of the Olympic Games. A lot of counter-heat measures are being put in place to ensure the safety of the athletes and the spectators coming out to visit.”

Best person for the job

Meanwhile, President of the BVI Olympic Committee Ephraim Penn said Harrigan-Scott is the perfect person for the job.

“The role of Chef de Mission will be well-suited to Mrs Harrigan-Scott who was the first female to represent the Virgin Islands at the Summer Olympic Games at Beijing 2008 and who since then also competed in the subsequent London 2012 and Rio 2016 Summer Olympics,” Penn stated.

He further said: “She has a wealth of experience in major international competitions that is unmatched by any other of our national athletes and we are fortunate that she accepted the role for what we anticipate will be an exciting Olympic Games for our roster of elite athletes who qualify to compete at Tokyo 2020.”

Harrigan-Scott is the first Virgin Islands female athlete to win a gold at an international event.

She achieved this milestone in 2006 at the Central American and Caribbean Games in the Women’s 100 metres and repeated the result in 2010.

She also boasts a bronze medal in the 60-metre dash at the 2008 IAAF World Indoor Championships — her most significant achievement yet.