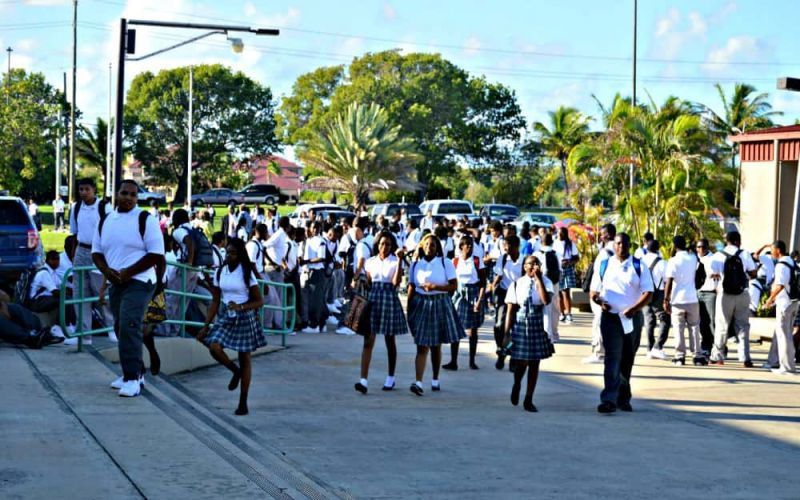 Gender-neutral dress code introduced by USVI Board of Education

The V.I. Board of Education has codified new dress code uniform guidelines for public schools meant to be gender neutral, in what board chairman Dr. Kyza Callwood described to the Consortium as the U.S. Virgin Islands coming in line with broader trends on the U.S. mainland relative to the rights of individuals.
Speaking during a phone interview Wednesday evening, Mr. Callwood stressed that changes to the B.O.E.'s Dress Code Uniform Guidelines were not made in a vacuum.

"We met with the Department of Education and several administrators and we came up with the policy. We also sent it out to the department for them to work through it. They added some of their changes before the board approved it. So this is not something that the board just did arbitrarily in closed and secret meetings," he said.

The need for a dress code policy update arose from parents who had concerns with their girl children not being able to wear pants at certain public schools, according to Mr. Callwood. He said that years ago girls wore pants at school, "but somewhere down the line, depending on who was the superintendent at the time, different things, principals, rules changed, but that's where that came about."

The new policy, seen here and on the V.I. B.O.E. website here, says "Students may wear either skirts or pants as uniform bottom wear."

That portion of the new dress code touched a nerve with some members of the community, according to Mr. Callwood, who said residents have been calling radio stations blaming him for the update.

Even so, the chairman sees the update as not only important but necessary, saying that lawsuits could have been brought against the board for what Mr. Callwood deemed an outdated policy.

"It had court cases where schools had to make their policies gender neutral where you can't violate and hold children hostage," he said. "You have to allow free expression once it's in a way that is professional, presentable and don't create disruption. Our [previous] policy didn't do that because remember they were created years ago. So we have to come now into the 21st Century where the policy needs to be gender neutral."

Mr. Callwood stressed that while the policy makes provision to allow for a boy to wear a skirt if he so chooses, the school administration has some leeway and a decision would be based on whether a skirt on a boy leads to adverse outcomes at the school in question.

The updated policy also allows boys to wear two earrings. "If I'm a parent I could take the board to court that you allowed girls to wear earrings and I'm a boy and I can't wear no earrings," Mr. Callwood said.

Relative to girls' choice to choose either a skirt or pants in the new policy, Mr. Callwood said some girls don't like wearing skirts because sometimes wind blows and lifts the skirts, leading to unwanted exposure. "Wearing pants, it allows you not to have to deal with that. But of course it also has provisions in there that the pants can't be fitted, it can't be tight, you can't wear no leggings, you can't wear no jeans. The shoes have to be either light or dark-colored, you know, different things in the policy," the B.O.E. chairman explained.

Mr. Callwood also highlighted children with tattoos, saying those too are acceptable as long as there is no disruption to the school. "You could have your tattoo but it needs to be covered," he said. "I don't need to be in English class and I could see what tattoo is on your hand with a sunflower. That creates disruption. So it needs to be covered; nobody needs to you know you have a tattoo — it's not important in the school [setting].

To assuage concerns on the matter of boys wearing skirts, Mr. Callwood stated, "We know in our community males don't wear skirts, so that's something known."

He added, "We had no cases in St. Thomas where any male wanted to wear any skirt to school. We have no cases with that, so all the males will be coming to school in a pants."

Other reasons for the update include a recent law called the Crown Act whose goal is to end hair discrimination in the territory.
Add Comment