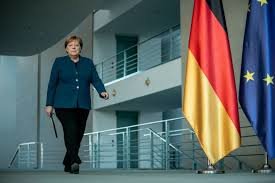 A majority of lawmakers in the Bundestag voted on Wednesday to allow additional borrowing to combat the crisis, according to the legislature’s president. The Bundesrat, or upper house of parliament, will vote on Friday.

The extraordinary authorisation is part of a packet of legislation aimed at protecting German jobs and businesses. The new borrowing of €156 billion (US$169 billion) is equivalent to half of the country’s normal annual spending.

“There is no blueprint for countering such a crisis,” Finance Minister Olaf Scholz said in the Bundestag in Berlin, filling in for Merkel who is at home in precautionary quarantine. “We’re doing that with an enormous amount of money, as precisely as possible.”

The package comes as the economy braces for its biggest slump in decades. Business confidence is collapsing at a record pace amid restrictions to slow the spread of the disease, and the Ifo economic institute predicted mass bankruptcies in what may be a deeper slump than during the financial crisis.

Germany’s ruling coalition of Merkel’s conservative bloc and the Social Democrats cast aside infighting to push for emergency powers, abandoning its long-standing balanced-budget policy in the process.

Backed by broad political support, the government plans to unleash a barrage of debt-financed measures totalling more than 750 billion euros to counter what Merkel called the biggest challenge to Germany since World War II. The package includes loans, guarantees and aid for large and small companies as well as money to buy stakes and even completely nationalise some stricken businesses.

The country, which tightened lockdown measures this week, has about 32,700 cases and more than 150 deaths, according to data compiled by Bloomberg.
#Coronavirus  #Angela Merkel
Add Comment