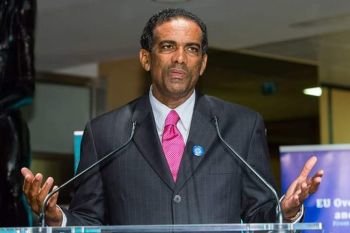 Former Deputy Premier under the National Democratic Party (NDP) and Independent Candidate in the 2019 General Elections in the Virgin Islands, Dr Kedrick D. Pickering has commended the Fahie administration for its handling of the COVID-19 pandemic.

Dr Pickering was at the time a guest on the Thursday, April 9, 2020 episode of 'Honestly Speaking' with host Claude O. Skelton-Cline when he also commended the Premier Hon Andrew A. Fahie (R1) administration for what he called 'credible' handling of the situation following the Territory's first three confirmed cases.

"I think the Government is doing a credible job in terms of the way they are handling the crisis... difficult circumstances, but I think they are doing a job in this point in time, they are doing good."

In addition to a strict 24/7 14-day lockdown and earlier lockdown measures, the government moved to block cruise ship calls, enhanced screening of borders and lockdown of airports from inbound flights.

The government had also temporarily blocked some Virgin Islanders from returning to the Territory and Dr Pickering said that while criticisms can be made; having been in office and making decisions, no government can do everything right but he underscored that the Fahie administration's response and strategy have been credible.

According to Dr Pickering, a former Minister for Natural Resources and Labour, the entire COVID-19 pandemic, in addition to being a health crisis, is also an economic one. He said people in the Territory should keep in mind that both issues are not mutually separated, rather, one is leading into the other.

He encouraged persons to continue social distancing, wear masks and practice basic health measures as a preventative measure against the virus.

This is the first time Dr Pickering has openly commented on the performance of the Fahie administration.

On the Tuesday, November 19, 2019, edition of the same 'Honestly Speaking' show, Dr Pickering told Skelton-Cline, "Let's leave that for another time," when questioned on the performance of the Virgin Islands Party Administration since taking the helm of government in February 2019.

While he has said he does not miss the politics of the Territory, Dr Pickering was a key part of the Dr D. Orlando Smith led NDP; however, for the 2019 Elections, he opted to run as an Independent candidate.

He contested the 7th District in a failed bid to retain his seat, losing to Dr The Hon Natalio D. Wheatley (R7), the current Minister for Education, Culture, Youth Affairs, Fisheries and Agriculture.