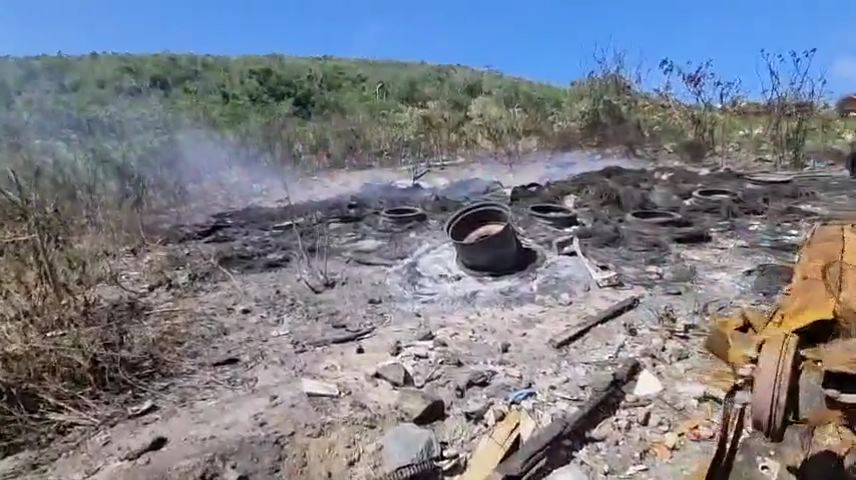 Health Minister Carvin Malone and Ninth District Representative Vincent Wheatley yesterday offered apologies for the inconvenience caused to Virgin Gorda residents who were badly affected by a dump fire that erupted a day earlier.
In a Facebook video posted by Health Minister Carvin Malone, the two government legislators were seen along with workers of the Public Works and Waste Management departments inspecting the aftermath of the blaze.

The dump fire comes days after an unrelated and disastrous fire at the Pockwood Pond incinerator which has now made the facility inoperable.

Malone said the dumpsite had approximately 200 to 300 tires stored and said the fire created quite a disturbance. He also noted that the fire may have been “caused either by accident or otherwise.”

“What I discovered about what we saw here yesterday, was that there were a few hundred tires that were being stored here to create an eco-friendly sewerage system,” Wheatley stated.

”Apparently, a cinder from the blaze on the other side landed in the tires and set the tires ablaze. It’s very, very unfortunate as the folks downwind really went through a very horrible time yesterday and we have to apologise for that, but accidents do happen,” Wheatley added.

He continued: “We must take the issue of waste disposal more seriously and you [Health Minister] being here is testament to the fact that you are taking this seriously, and we hope to see some changes very, very soon on how we’re handling this dumpsite here.”

Wheatley said a gate donated recently is expected to be used soon to impose a shift system on persons using the dumpsite.

Malone said his ministry will work with the Public Works Department to get facilities to control whatever burning needed to take place. He also promised that the site will be managed even better.