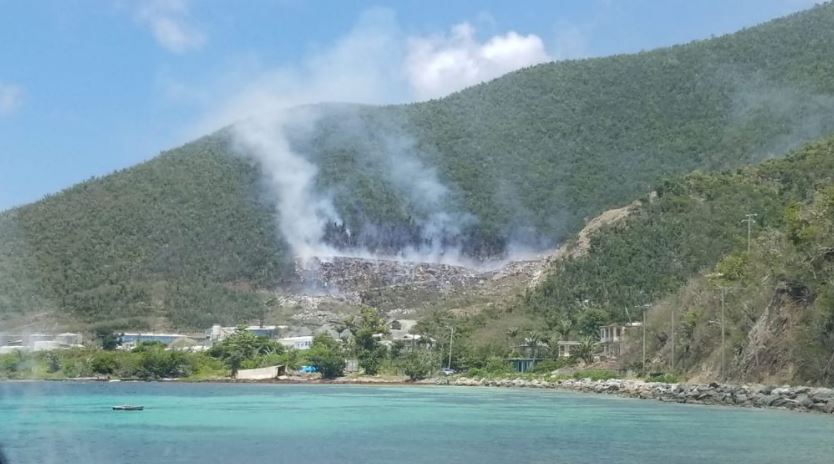 As the territory enjoys several weeks without any COVID-related lockdowns, the Ministry of Health has suspended its home garbage collection initiative and will be focusing on how to prevent spontaneous combustions at local dump sites.

Where house-to-house garbage collection is concerned, only some areas might benefit.

“We now have a full scale [map] as to which areas would be most effective in terms of house-to-house [collections]. But, clearly, not all the island would need to have the house-to-house. What we do need is to ensure that all of the community bins that we have; around them are kept pristine — clean so that we can then have a cleaner BVI,” Malone told BVI News in an interview on Sunday.

As home garbage collections are suspended, the ministry is reminding persons that, “the dumping of bulky waste at communal bin sites is illegal and that bulky waste should be disposed of directly to either the Pockwood Pond site in Tortola or the Valley Hill site on Virgin Gorda”.

In the meantime, Malone said considerations for preventing spontaneous fires at the Pockwood Pond dump is being done under his ministry’s Waste Management Strategy for the territory.

He said public consultations will be had on the matter soon.

“The BVI Waste Management Strategy will incorporate what are our steps ahead for legislation and for an immediate, medium, and long-term fix to the issue of the spontaneous combustions at the waste [facility] down at Pockwood Pond and Virgin Gorda and Anegada,” the minister stated.

“We have to get it fixed and we have to reduce the amount of waste going into the stream. So it’ a comprehensive look that we are now embarking on. And coming this week, you will hear a lot more on it,” he further told our news centre.

Authorities have been dumping Tortola’s waste on, and along the hillside since an unrelated fire that rendered the Pockwood Pond incinerator non-functional back November 2018. The incinerator has since been repaired but there have been a number of fires where the piles of trash were being dumped.